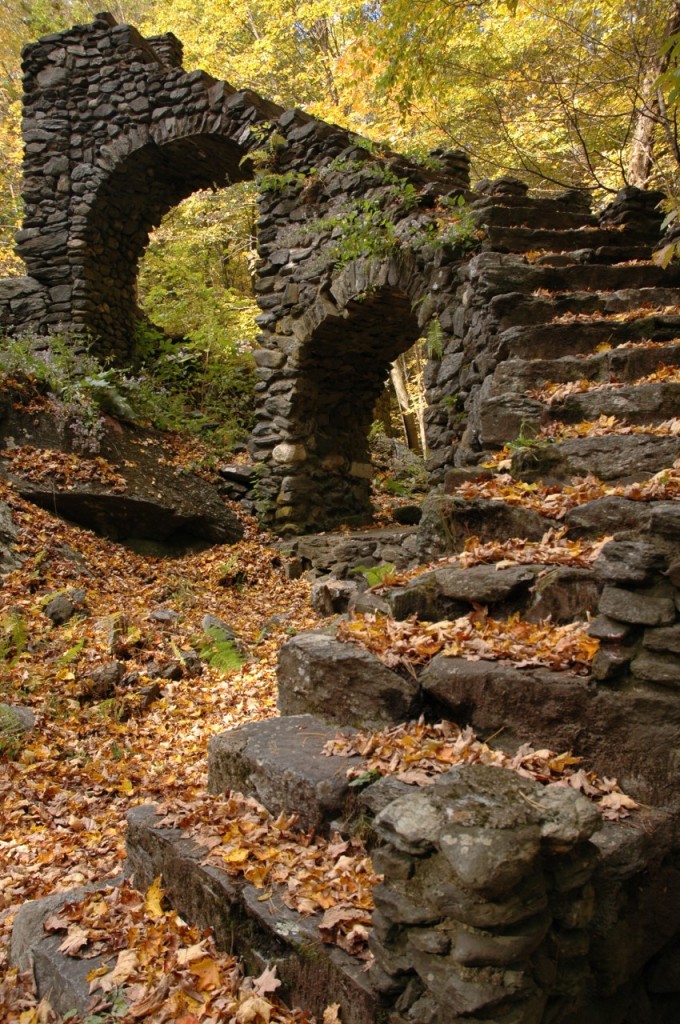 The ruins of Madame Sherri’s Castle in Chesterfield have been pulling the camera-faced for more than half a century to see and photograph the stony skeleton of that early twentieth century mansion against the fiery splendor of a New Hampshire fall or the snowy magic of a New Hampshire winter.

But, over this past weekend, that skeleton lost a few bones. Maybe a little splendor and magic, too.

The ruins are located at the edge of the Madame Sherri Forrest at the bottom of Wantastiquet Mountain. Their defining feature is a crumbling stone staircase that twists and rises across three ascending arches against a sylvan backdrop to dead-end at empty air like the centerpiece of a Caspar David Friedrich painting. But this past weekend, the topmost and tallest arch disintegrated into a jumbled pile of Old Man of the Mountain features.

Nobody saw it happen. Nobody was hurt. That part of the stairs just gave in to the inevitable decay that we all feel in our bones after a certain age, a victim of all the rain and that gravity that Roger W. Babson tried so hard to get us to rail against with his anti-gravity monuments.

The ruins of Madame Sherri’s Castle was one of the first New Hampshire oddities I visited when I moved to the state thirteen years ago. The second I saw a photo of it, I couldn’t believe that:

B) was easily accessible to anybody. I’m talking mere steps from a parking lot and on publicly accessible property, even though photos made it look like a hidden wonder buried deep in a private forest.

The reason these castle ruins exist in a land of no castles is thanks to a wealthy theater costume designer and dancer named Antoinette Bramare. She was born in Paris, but moved to New York with her scofflaw husband Anthony Macaluso, where she took on the flashier name of Madame Sherri. In 1929, after Macaluso’s death in an asylum, she moved to New Hampshire, bought six hundred acres, and built herself an eccentric castle for the purpose of throwing wild parties. She herself lived in a more humble house across the street. Eventually she went broke and left the house to the vandals. The vandals then ceded it to the arsonists who burned away all but the stone portions in 1962, including that evocative stairway to nowhere. Madame Sherri died three years later. 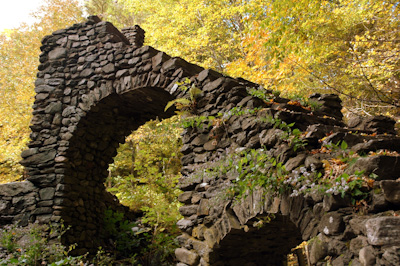 Her party house outlived her as a work of fine sculpture carved by those famous artists fire, time, and weather. But now, with the latest bite of their chisels, its signature stairway to heaven is more a stepping stool to nowhere.

But that there’s less of it now isn’t too sad. Not yet. The thing about ruins is…they ruin. Time and age (and vandals and arsonists and tourists) continually transform it by breaking it into pieces, wearing it away, grinding it down to Ozymandias’s feet. But that’s not to say that the appropriate response to the fallen arch is “Oh, well.” It’s an admonition. A warning. A reminder to see the strange stuff before it goes away. Because one day it will go away. And that will be sad. And instead of “Ruined Ruins,” the headline will be “RIP, Ruins.”

J.W. Ocker lives in Nashua and writes spooky novels and travelogues. His latest novel, “The Smashed Man of Dread End” comes out August 17. Visit him at oddthingsiveseen.com or send him New Hampshire oddities that he should visit at ockerjw@gmail.com.