Here's a guide for anyone ready to take the swimming hole plunge this summer.

Swimming Hole 101: swim at your own risk

Nothing compares to the freedom of taking a plunge in a swimming hole; cool water and fresh air without the dampening presence of authority figures. But with freedom comes responsibility. It almost goes without saying that safety comes first. Make sure that you are also abiding by proper social distancing rules, and check online before you head out to make sure that your destination is still open for your swimming adventures.

OK, now you’re ready to get your feet wet, so how do you find the swimming hole?

Note: Detailed directions to every swimming hole mentioned in this story – plus a few more – can be found on the map we’ve put together.

View Guide to Swimming Holes in a larger map

Let’s face it, most locals would have to be waterboarded to give away the location of their favorite swimming spot. When we asked a young woman languishing on a blanket beside a gin-clear natural pool in the Monadnock Region if it was OK to swim, she quickly replied, “I’ll tell you if you promise not to tell anyone else.” Many swimming holes have been in use for generations, just chat up a local at the general store, a gas station or fast food restaurant. Turnarounds on roads near rivers or streams are evidence of repeated use and are often indicative of a trout pool or swimming hole.

It’s a study in contrasts. The Granite State is literally laced with pristine rock-bound pools.

How kind of our forefathers (and budget committees) to construct so many perfect diving platforms that also provide shade for swimmers. 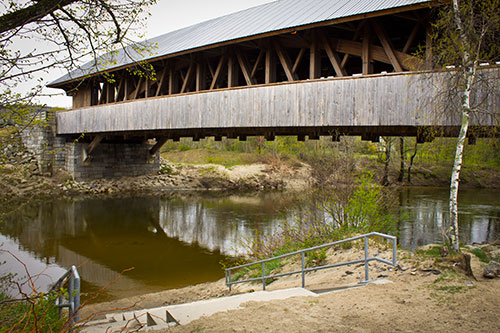 The Smith Covered Bridge in Plymouth is also a great put-in area to explore sandy beaches along the Pemigewasset River.

Even expensive waterparks do not surpass the thrill of a natural waterfall.

A sandy beach beside a wild river is like a timeshare in eternity.

On warm summer days youngsters frolic in the icy pools of the Ammonoosuc River just a beach ball’s toss from downtown Littleton. It might be a stretch to call it swimming; the pools are more suitable for wading than the breaststroke, but it sure looks refreshing. Visitors to the Littleton Grist Mill and the covered bridge on the river walk often pause to gawk at the giggling aquanauts. 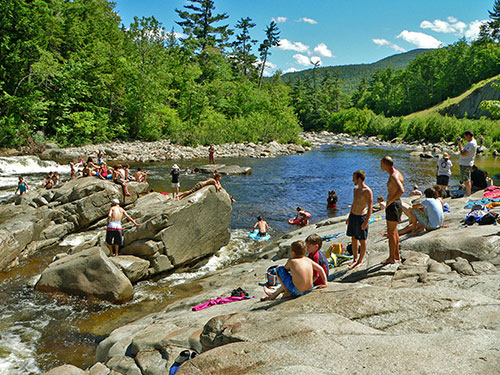 There is easy access to Swift River just off the Kancamagus Hwy. Photo by George Griswald

Discovering a mountain lake after a long, hard climb is proof positive that someone up there loves us. 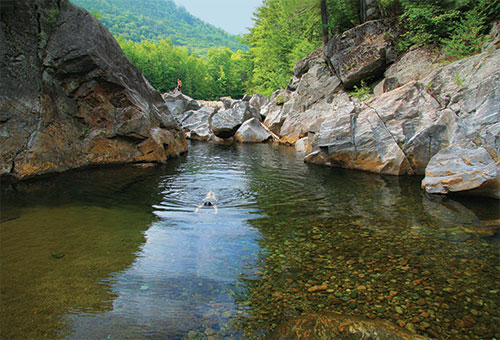 The sparkling waters of our lakes, ponds, streams and natural pools have not only been a draw for overheated children and feisty teens, but also the rich and famous.

Ah, the glories Squam Lake has known. Its clear water has cooled the cockles of no fewer than three Oscar-winning actors, including Jane Fonda, daddy Henry and America’s acting royalty, Katharine Hepburn who, along with the Fondas, insisted on doing her own stunts, including swimming during the filming of “On Golden Pond” in 1981. According to Jane Fonda, the water level in Squam Lake was so low during the summer of production that her father could have stood during the scene in which he was supposedly clinging to the rocks for fear of drowning. She wrote that the September water was barely knee-deep, but it was cold enough that he had to wear a wetsuit under his clothes. Hepburn, on the other hand, dove into the water without the aid of the wetsuit because she wanted the scene to keep its authenticity.

President Grover Cleveland was a known lover of outdoor sport – a crack angler, and as a youth, a competitive swimmer. In fact, while staying in his summer home in Tamworth, the 22nd and 24th president of the United States went fishing on Duncan Lake – the smallest lake in the state (some call it a pond) in the town of Ossipee, and loved it so much he built a fishing cottage on the shore. After a hot day on his boat, the life-long and rotund outdoorsman tickled his toes and was said to have taken a dip in the soothing waters in this secluded spot.

One of the most iconic images in literary history is an elderly Mark Twain, sitting on a rocking chair on a front porch in 1906. It was taken in Dublin, where Twain spent several summers. But what you don’t see is Dublin Lake, a big draw for Twain and other early 20th-century notables, including President William Howard Taft, poet Amy Lowell, aviatrix Amelia Earhart, actress Ethel Barrymore, novelists John P. Marquand, Henry Adams, artist John Singer Sargent, art patron Isabella Stewart Garden and many, many others who summered, swam and schmoozed on the private, pristine pool.

When it comes to quarry dipping and diving, some sensual summer seductions are best left to the imagination.

Rock quarries are the forbidden pleasure of the swimming hole world. Old-timers fondly remember the pleasures of taking a dip in Pease and Lovejoy quarries in Milford. There are still many throughout the state. If YouTube videos are to be believed, bare-chested daredevils are still getting cheap thrills by leaping more than 80 feet into at least one quarry in Concord. But the pleasures are far outweighed by the dangers of rock outcroppings and other underwater obstacles, So, if you were to ask us how to get there we fall back on the swamp Yankee truism “you can’t get theyah from heyah.”

New Hampshire is home to 51 “official” swimming holes, according to swimmingholes.org, an online resource for aficionados.

We did the hard research work for you! Click here for a Google map that includes detailed directions to every swimming hole mentioned in the story plus a few extra.

“Waterfalls of the White Mountains” by Bruce, Doreen and Daniel Bolnick is a great resource.

12 Things To Do Before Summer Ends