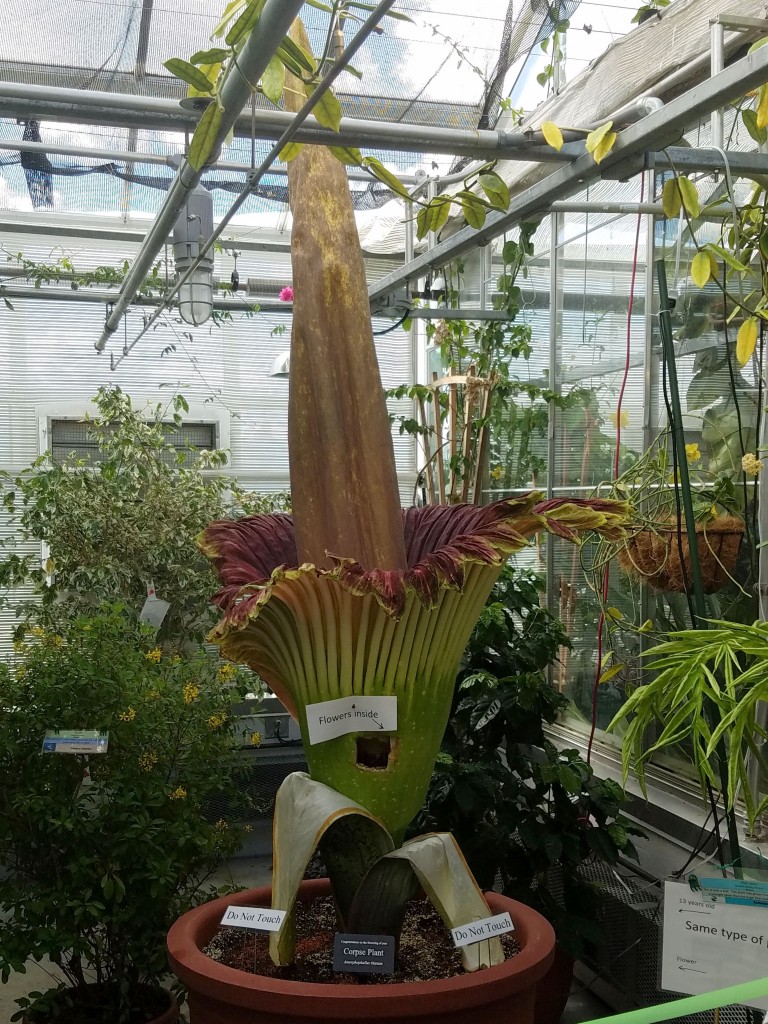 The greenery that Dartmouth College is usually famous for its ivy, but in the greenhouse atop the Life Sciences Center is a plant that attracts lines of visitors around the building — despite the fact that it smells like a dead body when it blooms.

It’s name is Morphy, and it’s a corpse flower.

Its scientific name is Amorphophallus titanium, which means giant, misshapen penis. Sorry, just does. The plant is made up of a tall green-brown shaft called a spadix wrapped at its base by a single large leaf called a spathe. The spadix can grow as tall as ten feet, and when it blooms the spathe opens to reveal the deep purple interior of the leaf. At that point, the flower emits a strong smell like rotting meat to attract pollinating insects.

Corpse flowers are native to western Sumatra, so they’re rare. And their blooms are even rarer. They’re also unpredictable. It takes around 10 years for a corpse flower to open for the first time, and then it can take anywhere from a couple of years to another decade for its next bloom. And it only blooms for about 48 hours.

Morphy’s almost two decades old, and most of the time it’s stayed a tight, impenetrable pod of a plant. However, three times in its life it has briefly bloomed. Once in 2011, once in 2016 and once in 2018. I caught it the last two times, and those experiences were among my most favorite in a life of chasing oddity.

Morphy is over seven feet tall and looks more like a prop for a science fiction movie than a real, living thing. Its scent was palpable, sweet and meaty, kind of like bad crab (as one of my kids described it perfectly). At night, the flower heats up almost to the temperature of warm-blooded animals, making the smell much stronger. It also takes a lot of energy for a plant that size. Hence the rarity of the blooms.

Both times I saw Morphy, I didn’t want to leave it. I wanted to take it home with me, strapped to the roof of my Civic like an alternate-universe Christmas tree. But I’ll settle for the pics of me standing beside it, beaming like I’d just met my favorite celebrity. Which I kind of had.