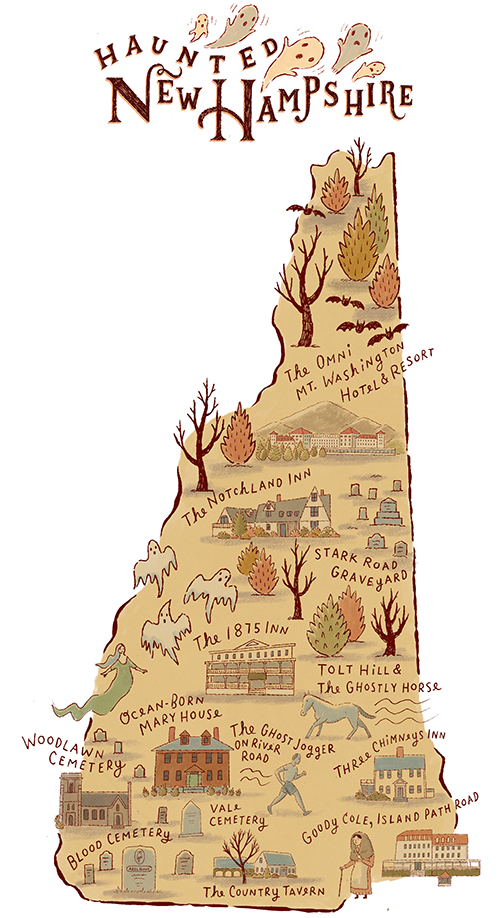 Hauntings are just supernatural reminders that interesting stuff happened in a place long before we arrived. The Granite State is coming up on its 400th birthday in 2023. With that much history, it stands to reason that we’d have our share of ghostly goings-on. If these locations don’t fill your need for chills and thrills, see our list of other ghostly sightings.

Legend for this map (and click here for a Google map with these and additional spooky spots.)

One of New Hampshire’s famous hauntings. In 1720, notorious pirate captain Don Pedro captured the ship “Wolf” off the shore of Massachusetts. When he spied a red-haired baby that had been born just that day onboard, he promised to spare everyone’s lives if the child was named after his mother, and so the baby was named “Ocean-Born” Mary Wallace.

Mary grew up, married and had children, though she was widowed at a young age. Eventually, Captain Pedro tracked Mary down and the two ended up marrying, and they lived together in a mansion overlooking the town of Henniker for a number of years. One day, Mary found the body of her murdered husband on the grounds of the house – many suspected he was killed over pirate treasure. Mary buried him under the huge hearthstone in the kitchen.

Mary died at age 94 in 1814. Since then, the ghost of a tall, red-haired woman with glowing green eyes has appeared in the upstairs window and on the main staircase. Many occupants of the house have reported feeling Mary’s presence and some believe that she protects the house from harm.

The oldest part of the inn was built in 1649 by Valentine Hill, who also built a sawmill and gristmill in the area. It’s his daughter, Hannah, who is said to still haunt the inn. Records show that she was married at age 20, and though there is no further mention of her life or death, it’s believed that she drowned in the nearby Oyster River.

A tombstone displayed in the parlor of the inn reads: “1778. Nancy Barton. Died in a snowstorm in pursuit of her faithless lover.” Nancy was engaged, but her faithless husband-to-be ran off with her dowry before the wedding could take place. Rather than just accept her fate and his treachery, she soon set out on foot to find him, but was caught in a terrible snowstorm. Friends found her frozen body next to the brook that now bears her name.

This inn has been featured on the show “Ghost Hunters.” The inn’s resident ghost is named Laura, who is said to have perished at just 12 years old during a fire sometime in the 19th century. Multiple guests have reported seeing a young girl in various rooms and hallways throughout the inn. 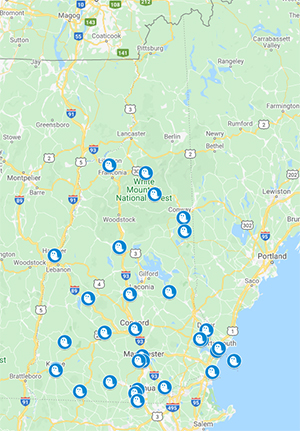 Find the places mentioned here, plus many more spooky spots on this Google map.

Built in 1902 by Joseph Stickney, the hotel has garnered a name for itself as having one special guest who has never checked out. As the legend goes, Stickney’s wife, Carolyn Foster Stickney – affectionately nicknamed “The Princess” or “Princess Carolyn” by hotel staff – was left widowed after his death, eventually remarrying to French royal Prince Jean Baptiste Marie de Faucigny Lucinge. Since her death in 1936, guests and staff reported sightings of the beloved Princess wandering the hallways of the third floor and descending the stairs for meals.

Reportedly a pair of big, red eyes will follow you if you visit the Stark Road graveyard.

Pine Hill Cemetery in Hollis is nicknamed for the ghost who supposedly haunts it — Abel Blood — buried there in 1867 next to his wife Betsy. There is a hand carved into the headstone that points upwards, and some say the hand will suddenly change to point down. Read more about it here.

It’s said that the Summer Knight Chapel is the center of the haunting. It’s here that people have reported the spirit of a little girl who will peer out from behind trees and buildings, giggle or even follow you around. Legend says if you curse in front of the chapel a ghost will wash your mouth out with soap — or at least you’ll have the faint taste of soup on your tongue.

Mary is said to haunt the cemetery. Blue lights rise from her grave and then slowly sink back down.

Accused of witchcraft in 1656 and again in 1671, Eunice “Goody” Cole (who lived at the end of Island Path) eventually died of natural causes in 1680 after enduring years of hatred and persecution. According to legend, she was buried by vengeful townspeople with a stake through her heart. Another legend says that kinder neighbors eventually properly buried her near today’s Meeting House Green. Today the area all along Island Path is said to be haunted — there have been reports of moving objects, lights and a figure that appears in the fog.

Perhaps New Hampshire’s only equine haunting — it’s said that the ghost of a horse, who sought shelter in an abandoned building during a blizzard became trapped, is still trying to escape even in death.

The Ghost Jogger on River Road in Manchester

It’s said that on Halloween night at 1:45 a.m. the ghost of a jogger can be seen along the road.

Categories: Halloween and Haunted NH, What Do You Know