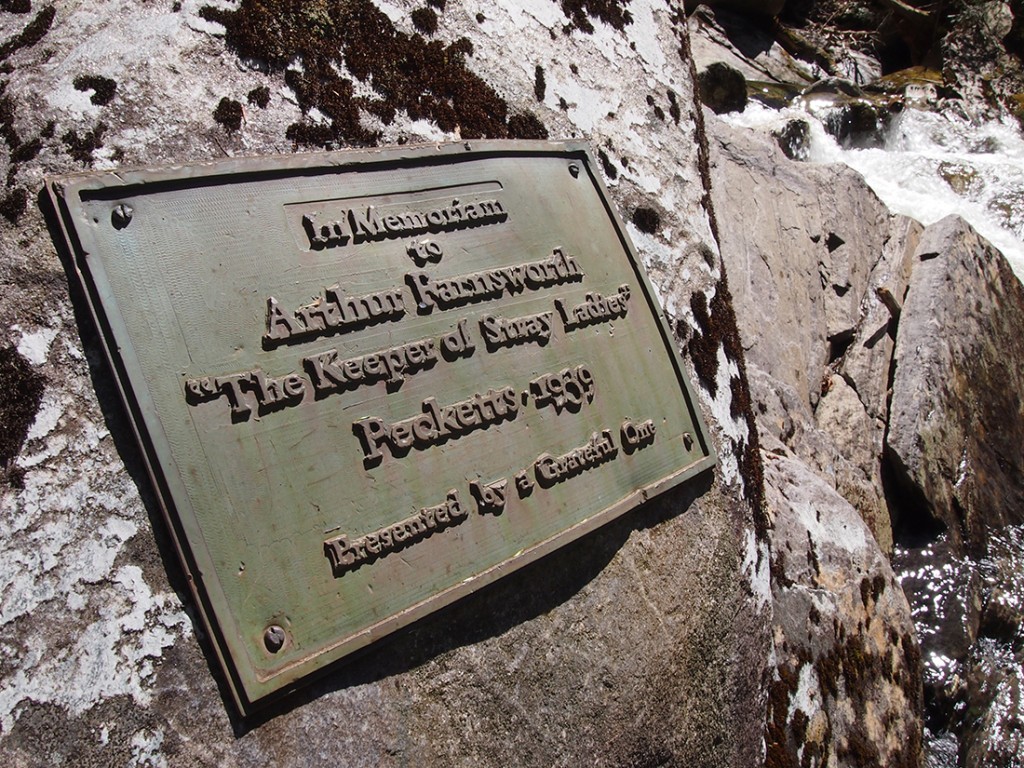 This plaque, in honor of Bette Davis’ late husband, is bolted to a boulder in the woods near the Bridal Veil Falls area of Franconia Notch. Photo by J.W. Ocker

But some of the hikes in New Hampshire can take you to some really weird, fascinating stuff. Like ghost towns. And airplane crash sites. Art installations. Carnivorous plants.

Yup. That Bette Davis. Oscar-winning star of such films as “All About Eve” and “Now, Voyager” and “Whatever Happened to Baby Jane?”

So what was she doing putting metal squares on New Hampshire granite?

She was born not too far away, in Lowell, Massachusetts. Her birth home has a giant plaque on its exterior attesting to the fact. But after she became a star out West, she bought and transformed a house in Sugar Hill, New Hampshire, which she called Butternut (and which still stands today). It was also here that she met Arthur Farnsworth, who would go on to become her second husband.

Apparently the two hit it off in the woods in the Bridal Veil Falls area of Franconia Notch in 1939. Unfortunately, the marriage would only last until 1943, when Farnsworth died from a fall down the stairs of Butternut. He was only in his mid-30s.

To honor their brief life together, Davis had a plaque bolted on a river boulder near the spot where they met. You won’t find her name on it, though. She kept it coy. It’s dedicated to “Arthur Farnsworth, The Keeper of Stray Ladies” and is attributed to a “Grateful One.” It’s pretty easy to get to and doesn’t take too much walking past all those redundant trees. Take Coppermine Trail, and pay attention to when the path parallels the river. There will be a short beaten path to the boulder.

And then go home, rest up, and watch her fight it out with Joan Crawford in “Whatever Happened to Baby Jane?”

J.W. Ocker lives in Nashua and writes spooky novels and travelogues. His next book, Cursed Objects, debuts in September and is up for preorder. Visit him at oddthingsiveseen.com or send him New Hampshire oddities that he should visit at ockerjw@gmail.com.