Climb to the top of an oddity in Tamworth 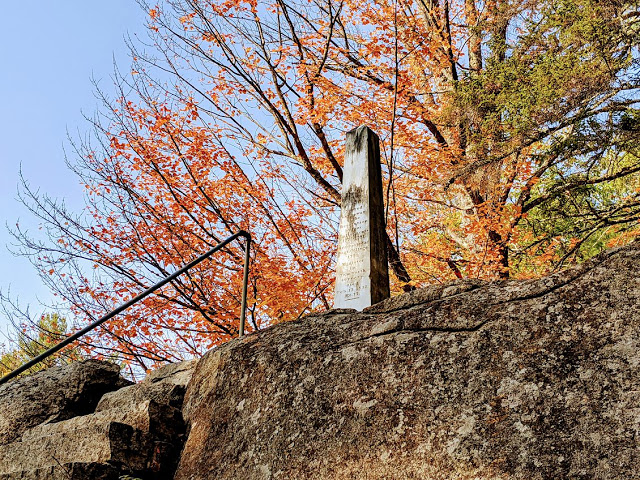 When we started “Live Free and Weird” two dozen columns ago, I planned on showing you some weird wonders. And I have. But I had no idea about the weird wonders you would show me. Readers have sent me quite a few over the past nine months that I hadn’t heard of before. And I’m visiting them all.

We love our giant rocks in New Hampshire. The Old Man. The Madison Boulder. But there’s a massive, historical glacial erratic with a pointy hat on it in the town of Tamworth.

I found the 20-foot-tall hunk of rock in a clearing on the side of Cleveland Hill Road, close to the intersection of Hill Hollow Road. But you don’t just ogle its sheer faces and unicorn horn. I mean, you can, but you can also ascend to the top of it via a series of old, crumbling stone steps. I did, and I found myself standing on the exact spot that Samuel Hidden was ordained as Tamworth’s minster on September 12, 1792. A white obelisk up there told me the story.

After I clambered up the boulder to get closer to the obelisk and the fall foliage, and then terrified myself with both vertigo and the discovery that some of this rock was held together by giant staples, I descended and checked out its neighbors. Beside it is the site of a 19th-century pound where stray livestock were kept and, in the cemetery across the street, is Samuel Hidden’s actual grave, a table tomb, the large horizontal slab a mass of close-set text, virtually unreadable, unlike his nearby cenotaph.

I’ve been hunting oddity here in New Hampshire for 12 years, and I only heard about this spired, spiritual stone because a reader cared. Thanks, Ilese.

So please keep sending me New Hampshire oddity. I promise to check it out and report back.

J.W. Ocker lives in Nashua and writes spooky novels and travelogues. His newest book, “Cursed Objects,” is out now. Visit him at oddthingsiveseen.com or send him New Hampshire oddities that he should visit at ockerjw@gmail.com.