Tasting From the Couch

If heading to your local brewery is out, here are four beers you can enjoy at home 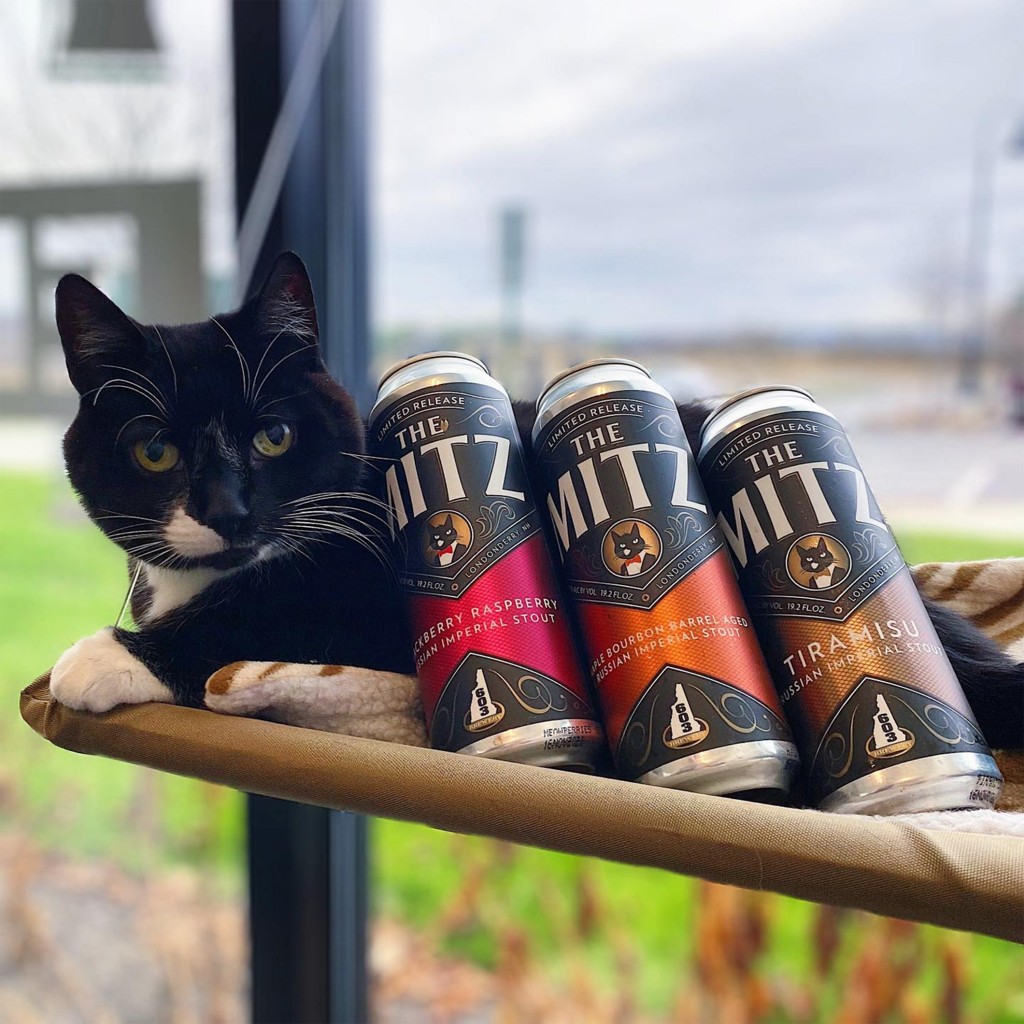 Mitzi the cat is the mascot of 603 Brewery’s line of imperial stouts.

As a person whose day job necessitates driving 600-800 miles a week, interacting with and making deliveries to actual, breathing humans, I have a different role and a different perspective than most on the reality show currently playing. I spend significant time in restaurants and, although I go out to eat and drink less than I did before things changed, I still go out.

But in a rare moment of enlightenment, or at least a partial escape from total self-absorption, I remembered that some folks are staying home, so I decided to do some reviews from my living room. I want to thank my musical partner in crime Mark for volunteering to drink five beers in one sitting. But know that we are trained professionals, and this exercise is far too dangerous to attempt without appropriate supervision. Hiccup.

To say that New Hampshire has a vibrant brewing scene would be an understatement. With 93 breweries currently operating, and over a dozen being planning, New Hampshire has more breweries per capita than almost any other state in the union. My Virgil through the seven circles of cerveza was Margaret Bingel, manager of award-winning Bert’s Better Beers in Hooksett, daughter of the the world-famous Bert, and an old friend of mine. Let us begin our descent into the suds. For the record, no IPAs were harmed in the making of this column.

Our journey begins with a recent entrant into the marketplace, Wildbloom Beer in Henniker. Wildbloom is the brainchild of Devin Bush, who is also the head brewer at Henniker Brewing. Devin cut his teeth at the University of Sunderland in the United Kingdom, learning to brew before he was old enough to drink in the US. He worked on yeast ester (aroma compounds) production with William Grant during the formulation of a very famous gin, and eventually ended up in Henniker.

Truth be told, I am a huge Devin fanboi, and I am very excited that he was able to open what is called a tenant brewery at Henniker Brewing, essentially leasing space for his own equipment to manufacture his beer. The beer I sampled is a saison called Forage. Saisons are a difficult style to define, as examples are widely varied, but traditionally the style originated in the region where France and Belgium meet, and most of the commonalities come from a specific yeast strain. This beer had notes of clove and slight smoke from the Belgian yeast, the malt was grown in Penacook at Morrill Farm and malted by Valley Malt in Maine, the hops were grown at The Hop Yard in Gorham, Maine, and the beer is delicious. Pale yet flavorful, 5.8% ABV and very repeatable. 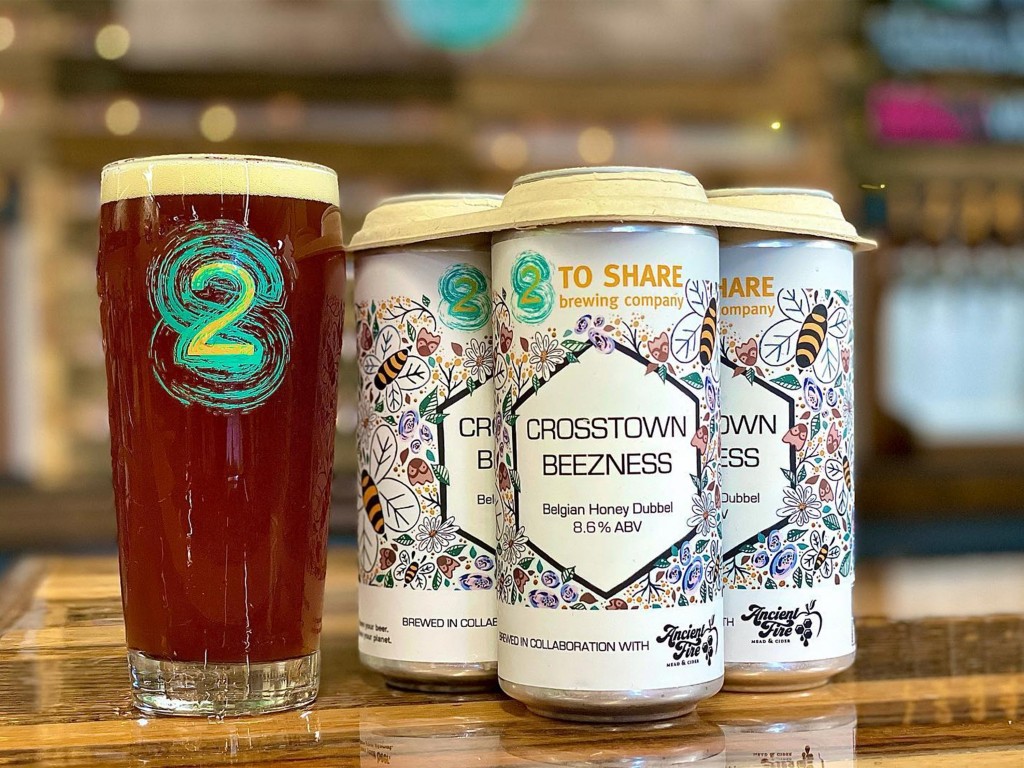 Crosstown Beezness by To Share Brewing and Ancient Fire Mead and Cider.

Next, we tried Crosstown Beezness, a collaboration between To Share Brewing and Ancient Fire Mead and Cider, both located in Manchester. This is what is called a braggot, which is a mead/beer hybrid. The base style is a Belgian dubbel, which is traditionally a fairly dark, slightly sweet beer originally brewed by Trappist monks. This iteration is a little more high-test than many historical examples at 8.6%, but there is no alcohol burn — just malty, roasty tastiness with a hint of honey in what is called the retro-nasal — when you exhale through your nose after swallowing.

Aaron and Jenny run To Share about six blocks from my house, and they have a very cool spot for those inclined to commute and commune. Having collaborated with Ancient Fire owners Jason and Margot myself, I can assure you that they are as fun as their social media presence would suggest.

All That Jazz from Henniker Brewing Company is a dark lager, an unassuming and under-brewed style. Aside from being a sucker for a musically named beer, I am also a sucker for dark lagers. We don’t get many imported from Europe into the state, and they are not a big sexy beer that flies off the shelf, so local brewers don’t make many either. This beer was inspired by Czech dark lagers, which are often softer and less astringent than German dark lagers such as Schwartzbier. Hints of caramel and chocolate flash and give way to a subtle spiciness and
a whiff of toast. Gloriously simple.

I remember meeting Mitzi the cat at Londonderry’s 603 Brewery years ago, at the old location when it was still small. She was aloof but attentive, in the way of cats, and I got in a few choice scritches before she wandered off to guard the grain. The Mitz is 603’s line of imperial stouts. This year’s variants included maple bourbon barrel aged and black/raspberry, but I opted for tiramisu.

At 11.9%, this is a giant beer. Dark, roasty, sweet, malty and a bit warming on the way down. Hovering at the edge of too sweet, it was a perfect beer with which to end a jam session.

I have enjoyed watching 603 grow from a tiny brewery in the land of NOCO (north of Concord) to a growing presence in a shabby industrial park to a premier destination for food and beer (their relatively new Beer Hall). Tamsin and the crew are doing it right, and I am glad to have them in my state.

Until we meet again, at a bar or in my backyard, keep your glass full.