The Importance of Creating an Advanced Directive

If the worst happened, would your loved ones know what you would — or wouldn’t — want? 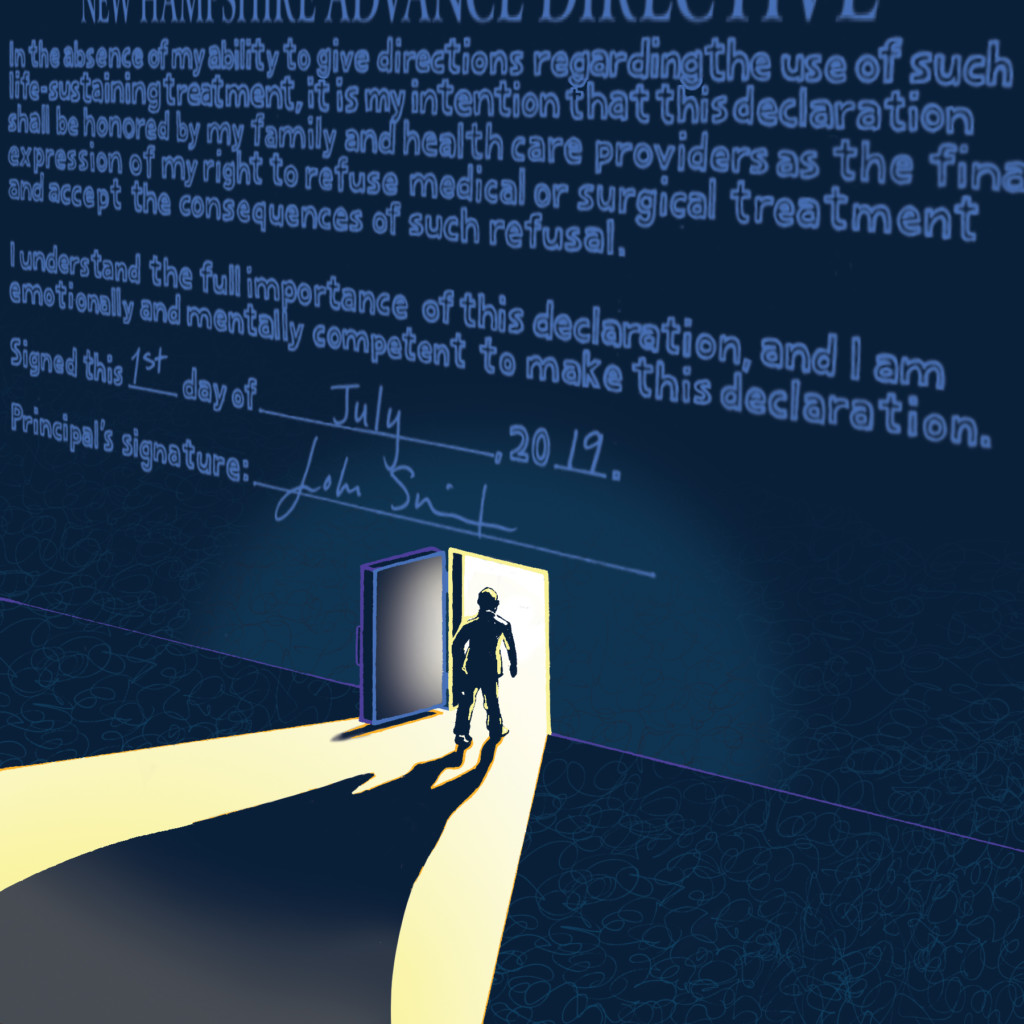 Of the two certainties in life, it’s a safe bet that most of us would choose taxes over death. In fact, thinking about our demise is so unbearably hard that some of us avoid any consideration of our mortality until advanced age or illness sucker punches us into facing reality. And even then, we might still put it off.

Perhaps this explains why so few people create an advance directive — a legal document that specifies what types of medical intervention we wish to receive if we become unable to communicate or make decisions about our care.

“More than 70 percent of people” have no advance directive or anything remotely resembling one, says Mary Valvano, MD, chief of emergency medicine at Portsmouth Regional Hospital. But advance directives empower patients and spare friends and family from possibly having to make gut-wrenching decisions.

If you’re young and healthy, you might think you don’t need an advance directive. Having one can benefit an adult of any age, however, because anyone can suddenly fall ill or be seriously injured in an accident. “Starting at age 18,” Valvano says, everyone should have an advance directive.

Indeed, as Valvano points out, some of the most famous cases involving advance directives centered on young individuals in their 20s who didn’t have one — Karen Ann Quinlan and Terry Schiavo, for example, who long persisted in a vegetative state and sparked bioethical debate over the right to die.

There’s no need to worry about changing your mind over time: If you fill out an advance directive form at the age of, say, 30 and decades later find that your interest in life-sustaining treatment has changed, you can create a new advance directive.

Completing an advance directive means considering, among other things, what you value in life and how you want to live. Would you want to be kept alive via mechanical means? If you’re not sure what your options might be — say, what being on IV nutrition or a ventilator is like — talk to your physician, Valvano says. “It’s much better to have those conversations” during a relaxed office visit than “at the bedside with me as the emergency physician trying to explain” what cardioactive drugs are, for example, or what is involved with delivering electrical shocks to the heart. “It’s never enough time when someone’s critically ill.”

The process of creating an advance directive is quite simple and can be completed in as little as 10 minutes, says Pat Marsh, RN, acute care case manager at Patient and Family Services at Southern New Hampshire Medical Center. (Free forms are available online.)

Patients can choose how much detail they want to go into. “There are advance directives that delineate lots of different things,” Valvano says, as well as options such as do not resuscitate cards, and POLST forms (short for provider orders for life-sustaining treatment), which are most often used by people who are frail or seriously ill, and indicate highly detailed preferences regarding medical care.

While many people, Marsh says, just don’t “want to talk about it,” and think “nothing’s going to happen to them,” completing an advance directive will pay dividends later — and not just for the individual in question.

“When you’re at the moment of life and death,” Valvano says, “it’s super-hard [for your loved ones] to make a decision that says, ‘Don’t do everything,’ even though they know that that’s what you wanted.” An advance directive will prevent you from receiving treatment that you don’t want and will potentially spare your loved ones from having to agonize over “one of the most difficult decisions of anybody’s life.”

“Sometimes,” Valvano says, an advance directive “is the best last gift that a loved one can give to their family.”

Ask your doctor for an advance directive form or grab one online. (Either way, it’s free.) Fill out the form — no attorney required — to name an individual who will make decisions on your behalf if you become incapacitated, and to indicate what kind of care you do and do not wish to receive. Sign the form in front of two witnesses — perhaps your significant other and adult child, for example — or a notary, and ideally, bring it to your next doctor’s appointment so that it becomes part of your medical record. If you choose instead to keep your advance directive at home, be sure to alert loved ones as to the existence and location of the document.