Get your fill of local oysters at Oysterpalooza in Portsmouth 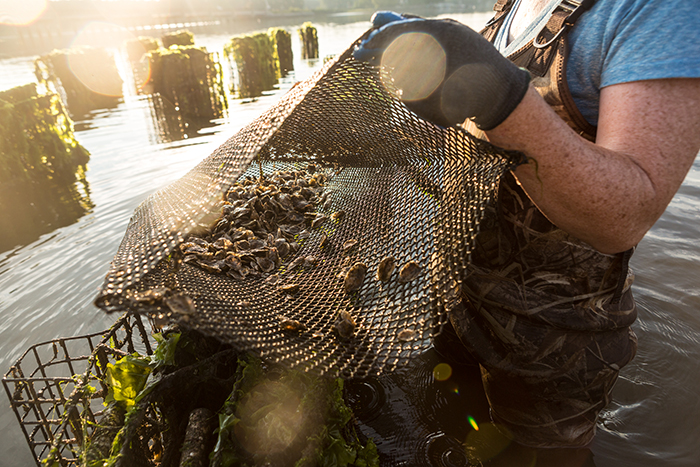 Harvesting Fox Point Oysters from Little Bay, which is a part of the Great Bay estuary. Photo by John Benford

With a touch of coolness starting to kiss the air, it’s time to honor the joys of summer and the harvest of the sea from our Great Bay estuary. Yes, its time to celebrate with Oysterpalooza, a festival of local craft beer and the bounty of oysters.

The venue is once again Liars Bench Beer Co. on Islington Street in Portsmouth. Two years ago, says event co-organizer Matt Louis of The Franklin Oyster House and Moxy, they ran into logistical challenges at the former site. So, he says, Dagan Migirditch of Liars Bench and Louis moved it to the brewery “at the 11th hour.” Happily, it worked out.

Migirditch’s source of pride is the brewery’s ever-rotating beer menu. “We have 50 that are certain to return for seasonality,” he says, “but we have produced more than 150 varieties.” On tap for Oysterpalooza will be one of his favorites, No Dice, a nice, clean easy-to-drink pilsner with an abv of 5.3.

The fest will take place in their beer garden, which opened last summer, and will feature bivalves from three farmers, Fox Point Oysters, Cedar Point Oysters and Virgin Oysters. 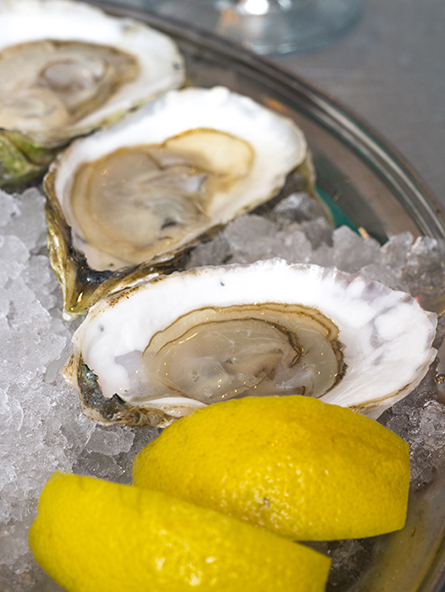 The Franklin Oyster House in downtown Portsmouth is an excellent place to enjoy local oysters. Photo by John Benford

More than a celebration of summer, Oysterpalooza raises awareness of the Great Bay estuary. Currently there are more than 15 oyster farmers are providing fresh local oysters, which in turn helps clean the bay.

What makes New Hampshire oysters especially interesting? Louis, who often sells more than 1,000 oysters a day at The Franklin, says, “They are cultured in waters with a 10-foot tide that comes and goes twice a day, changing fresh and salt water constantly. Overall, I find our oysters well balanced between sweetness and salinity, with a nice minerality — New Hampshire oysters are definitely unique.”

All the oysters coming from the bay have their own flavor subtleties. Oysters are basically water filterers, and the salinity, depth and flow of their beds makes a difference in how they feed. Some are sitting in cages on the bottom, others in trays near the shore, which changes their diets. In a win-win situation, the presence of the oysters helps keep the bay pristine. The farmed oysters also spew larvae, adding to the general oyster population.

Oyster grower Laura Brown of Fox Point Oysters was licensed in 2012 after a career in glass arts in Seattle. She welcomed the chance to come back to New Hampshire, where she was born and raised, and started selling Fox Point Oysters in 2015. “The oysters are not fed, making them a truly organic food,” says Brown. “They eat what nature provides. Great Bay’s mix of tidal water from the Atlantic Ocean and freshwater from the Bellamy, Oyster, Lamprey, Squamscott and Winnicut rivers creates ideal conditions for growing oysters that are slightly sweet with a dash of the sea,” adds Brown.

Oysterpalooza is an all-you-can-eat event with an array of oysters on the half shell, other seafood offerings, plus a shucking contest. Proceeds, in part, go to the Coastal Conservation Association of New Hampshire. Shells are recycled back into Great Bay to help build habitat for more oysters.

Along with the other growers, Brown brings about 600 oysters for the crowd to enjoy. Moxy and Seaport Fish will bring other sea-centric foods for the raw-food phobic.

There will also be live music and an oyster-shucking contest. Last year, the contest winner was Jeff Odess, sous chef at the Black Trumpet in Portsmouth. He went on to place seventh in nationals.

Oysterpalooza is a perfect introduction for the novice and a delight for the initiated. Oysters are a true taste of New Hampshire. Get them while they’re cold!

September through December is a great time to purchase oysters since the heat of the summer is over and they’ve finished spawning.