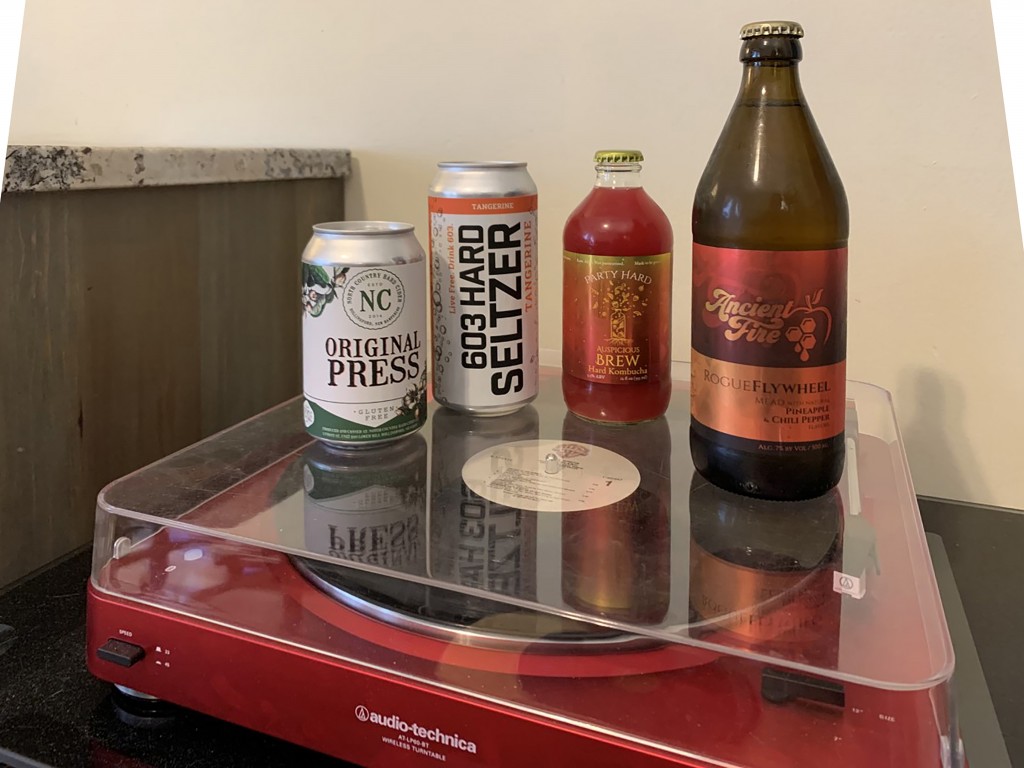 For the sake of transparency and full disclosure: I don’t buy many alcoholic beverages. As the co-owner of a brewery, beverages sort of “materialize” on occasion. Even when I try to pay for drinks out, I am often refused the ability to do so. Waaah! Poor me. My point is, that when I decide that my drinking is going to take a certain vector, it requires actual action on my part. So, to ameliorate my necessity for effort, I reached out to Jon Pinches of The Packie in Manchester, and asked him to supply me with four not-beer yet New Hampshire-made potent potables. He did not let me down.

What I failed to inform him, or my editor (sorry), was that I was going to pull a Kramer and multitask a band rehearsal with a tasting session for New Hampshire Magazine, so my partner in musical arms Mark Vadnais and I paired four New Hampshire-fermented beverages with songs we cover. We hope you like the mix!

603 Brewery took several years to perfect their seltzer recipe, and it shows. Although I have sampled a dozen or so entrants in this category, it is not a drink I naturally migrate toward, and so my love of their tangerine seltzer is even more compelling as a result. The fruit is right up front with no apparent sweetness. The mouthfeel is very light and totally appropriate for the style. My friend Dan has once again outdone himself with this absolutely repeatable (I already bought more, shhhh) refreshing beverage. We paired this with the song “Rodeo Clowns” from G Love and Jack Johnson — it comes in slow and mellow but can also take you to the end of the party when the lights go out. Tip the cup!

North Country Hard Cider produces some of the best cider in this part of the country, and we paired this beverage with an original tune called “Bean Hollow.” Bean Hollow is a beach just far enough from Santa Cruz, California, to be quiet, just subtle enough to be awe-inspiring, and just quiet enough to be deafening. I misspent almost a year of college there, and their Original Press cider reminds me of the simple complexity of youth. It is apple through and through, but there are subtleties of vanilla, pear and straw running around the strip of sand between the hills and the sea. As it warms, the complexity intensifies with grass and lemon notes.

Auspicious Brew provided Party Hard hard kombucha with cactus and beet. For those of you who are nonkombuchainators, kombucha is, at its simplest, tea fermented with a motley crew of microbes called a scobe. Traditionally, it was 0.5% alcohol or less, just encouraging enough fermentation to create beneficial compounds. Lately, however, folks have been turning it up to 11 and creating kombucha with a kick. Like this one. Earthy and dry, with a multipronged tang of acetic (vinegar) and lactic (sours the beer) acids, it was unlike anything I had ever had, and I wish I had bought a second bottle. The melange reminded me of “A Passage to Bangkok” by Rush, which we can in no way whatsoever cover.

Ancient Fire’s rockstar meadmeister Jason Phelps has done it once again with Rogue Flywheel, their pineapple and chili session mead. Although this category is new to many folks, session meads (under 7-ish percent) are playing very well in the beer world. The pineapple is the first thing to greet you in this lightly carbonated delight, and the hot pepper plays a quiet second fiddle, as (in my opinion) it should. This is not a hot beverage, nor is it just for heat-seekers — it is, like most of what Ancient Fire puts out, an exercise in balance and equilibrium. It somehow struck me with a sad note, however, despite its deliciousness, and we paired it with “No Rain” by Blind Melon. I was lucky enough to see them a few weeks before Shannon Hoon passed, and he would have approved.

Until we meet again, at a bar or in my backyard, keep your glass full!

Aged for the Better