A history of modern beer from brew to bottle 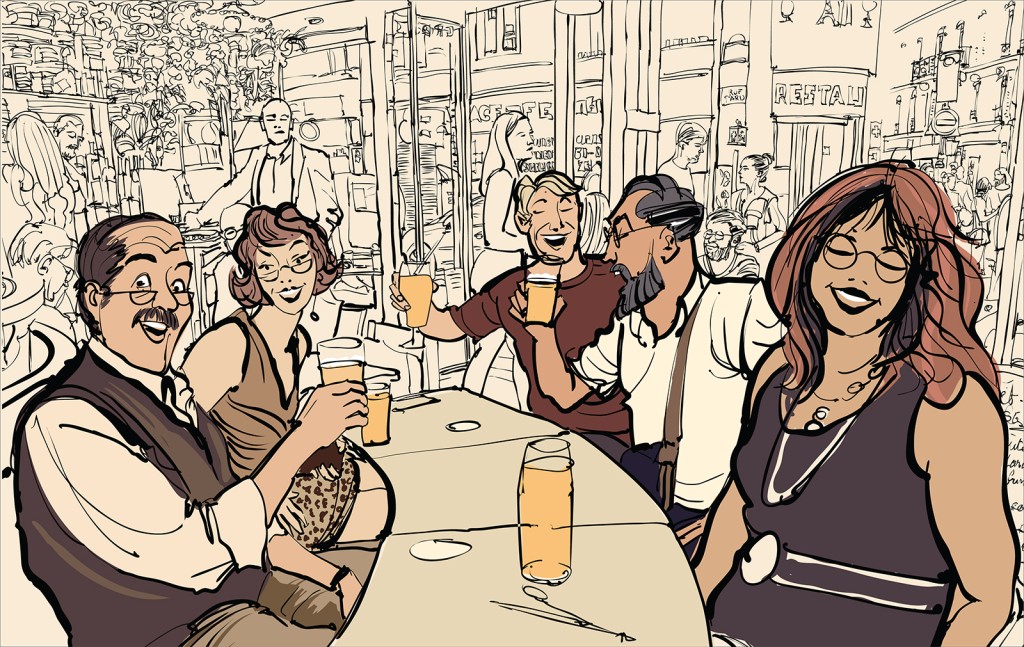 As an introduction, I should admit that I don’t consider myself an expert on “modern beer.” In the past, I have been everything from a home brewer to a certified beer judge (a real thing) to a brewery owner and professional brewer. These days, I generally use less brain power when I bend the old elbow — I just like to enjoy beer. But as the craft beer landscape increasingly becomes a victim of urban sprawl, I figured some folks might like a few signposts and landmarks to better understand where beer has been to help decide where they would like to go next. (Beware, for my contracted word count will necessitate a few generalizations in the following ramble.)

In broad strokes, we can look at beer in terms of place of origin. Before we had an international economy, beer was a very localized product often reliant upon the quality of groundwater available in a given place. Styles and philosophies developed along these lines. Belgian beers tend to focus on the yeast, British beers on the malt, and American beers on the hops, with German beers blending the best of all three.

Ale yeast (saccharomyces cerevisiae) is generally used when the style dictates some flavor contribution come from the yeast. This might be the use of stone-fruit notes in a proper English bitter, or the clovey finish of a traditional German hefeweizen. These ales are often described a “flavorful.” Lager yeast (saccharomyces pastorianus) ferments cooler and slower than ale yeast, which means less opportunity to produce flavor and aroma compounds, and it must cold-condition for two to six weeks after fermentation. “Lager” is actually German for “to store or warehouse.” These lagers are frequently called “clean” in character.

Lastly, we have mixed fermentation. Some of these beers had all the fermentation done by special bacteria rather than lager or ale yeast — we call them “bugs” in the brewing world. Some had bugs introduced, either with an addition of a bacterial culture or by storing in a wooden container with resident bugs after primary fermentation had been accomplished with a standard yeast. These brews are “funky,” like an old batch of collard greens.

Until the last 25 or years so, most beer sold in America was of the lager variety and was dumbed down from its ancestors in continental Europe, mostly due to consolidation and standardization. The beer my dad was drinking when I was still in plaid slacks and turtlenecks was pretty interchangeable with whatever beer my neighbor’s dad was drinking to the point where the grocery stores offered generic BEER with no style differentiator. Nobody expected significant differences between any of the national brands — a far cry from the dark and malty schwartzbier of the Franconia region of Germany or the fullness of a Munich dunkel. But there were Americans for whom this uniformity was unsatisfying, and in fact offensive to both tastebuds and history. Some brave souls risked criminal prosecution and brewed their own beer at home! Yes, gentle readers, home brewing was still illegal, by virtue of poor verbiage in the legislation, until 1978. But there was a will and there was a way, and we have those merry miscreants to thank for the market diversity we are now experiencing.

Because it was harder to control fermentation temperature (required for lagers) at home than in a factory, American home brewers experimented with ale yeast, which also required only two to three weeks total from brew to bottle. They had no bottom lines to meet or stockholders to please, so they used ridiculous amounts of hops in their pale ales, specifically Cascade hops. Cascade was developed and brought to market by Oregon State University in 1972, and it single-hoppedly changed our perception of beer. Crack open a cold Sierra Nevada Pale Ale, pour it into a glass, and inhale the aroma deeply: That is the glorious complexity and simultaneously the simplicity of Cascade hops. Some qualities often attributed to Cascade are green fruit, spicy, red berries and citrus. I could go on about this hop all day, but I am running out of space.

The natural evolution of this brewing movement took hold in the early- to mid-’80s, depending on how close to a coast you lived. The beers from this era were, for the most part, bold. They were brewed in vociferous defiance of the status quo and were quintessentially American, but often they were one-dimensional, or at least lacking nuance. The stouts and porters were dark, the pale ales and the new-fangled American IPAs were crisp and hoppy, but often that is all they were. Even more often, they were all that was available. In addition, these styles were not being brewed by the big breweries but by something called nano-breweries.

With capitalism being what it is, the national manufacturers (eventually) knew a good thing when they saw it and tried to emulate what was happening in the start-ups emerging all around them. This was an interesting experiment, but it gained little traction with the supermarket shoppers at whom they were aiming. (The notable exception being Mitch Steele’s specialty project at Anheuser-Busch in the early ’90s. He went on to helm Stone in California for a decade, but that story is worthy of its own article.)

All of which brings us to today. We have more breweries in America than before the Anti-Saloon League introduced the 18th Amendment (may it rest in peace). New England-style IPAs, with their soft mouthfeel and focus on aromatics as opposed to bitterness, have supplanted their West Coast brethren in popularity and brought IPAs to a broader market. Sour beers, made with ale yeast but soured with the same lactobacillus found in yogurt, have brought mixed-fermentation to the main stage and given folks who don’t like hoppiness and/or maltiness an alternative to wine coolers. Barrel aging, once relegated to a few styles brewed near both sides of the English Channel, has experienced a rebirth to the point that barrel brokers compete for breweries’ business.

There is a beer out there to please almost any palate, and you should explore to find yours. Until we meet again, at a bar or in my backyard, keep your glass full!

What we know as “sour beers” practically all have their origin in what was, until recently, an obscure style — the Berliner Weisse. This style evolved in northern Germany before the 16th century and bears little resemblance to modern ‘Merican sours. It was originally brewed as an off-shoot style of the already-popular wheat beers of the time. The wheat and barley were minimally kilned to maintain the light color, and hops were used very sparingly, as hops are antibacterial and their absence allowed the souring bacteria of the lactobacillus family to thrive in and sour the beer. Wild yeast (brettanomyces) often played a part as well, and the result was cloudy, low ABV (often below 5%), and wicked tart, guy! No fruit was harmed in the making of them, but they were often served “mit Schuss” or “with syrup,” meaning syrups of raspberry or woodruff (an herb with apple and vanilla notes) were offered to the patron to add as they desired. As sweetness is difficult to package with active yeast, modern brewers use a few tricks to introduce the fruit to the beer. I spoke to Jon Pinches from The Packie in Manchester for his current favorite five available sours from New Hampshire. Here they are, tasted with some fine baby back ribs during a hiphop tailgating session with my dear friends Jenn and Charlaine. Quotes are situationally unattributed. Spoiler: The beer was better than the beats.

THROWBACK BREWERY Cheek Squeezer > The driest of the bunch, bringing the sour notes to the forefront. “I like that it tastes like real tart cherry and not fake cherry candy.” Almost salty on the finish.

MODESTMAN Hard Reign > This was an imperial sour, weighing in at 8%. Sweeter than most of the rest, bigger mouthfeel. “Jammy, some grapiness, quick finish.” Almost a winter sour, if there is such a beast.

STONEFACE Raspberry Berliner Weisse > It packs a flavor punch for only 3.7%. Quite fruit-forward, “Hits that little dangly thing in the back of my throat.”

LITHERMANS LIMITED Throne of Gold >  A huge sweet nose of passionfruit and tangerine on this Barbados Punch-inspired sour, barely any nutmeg detectable. “Reminds me of my Caribbean honeymoon, and not just because of the quick finish.”

BRANCH AND BLADE I Just Want to be Puree > This is what is called a “smoothie” sour because of the residual sugar at packaging. “It was thick yet fizzy, a weird yet enjoyable contrast of mouthfeel and carbonation. Banana daiquiri all throughout with a hint of lime at the end.”