Learn more about the casualties of Mt. Washington 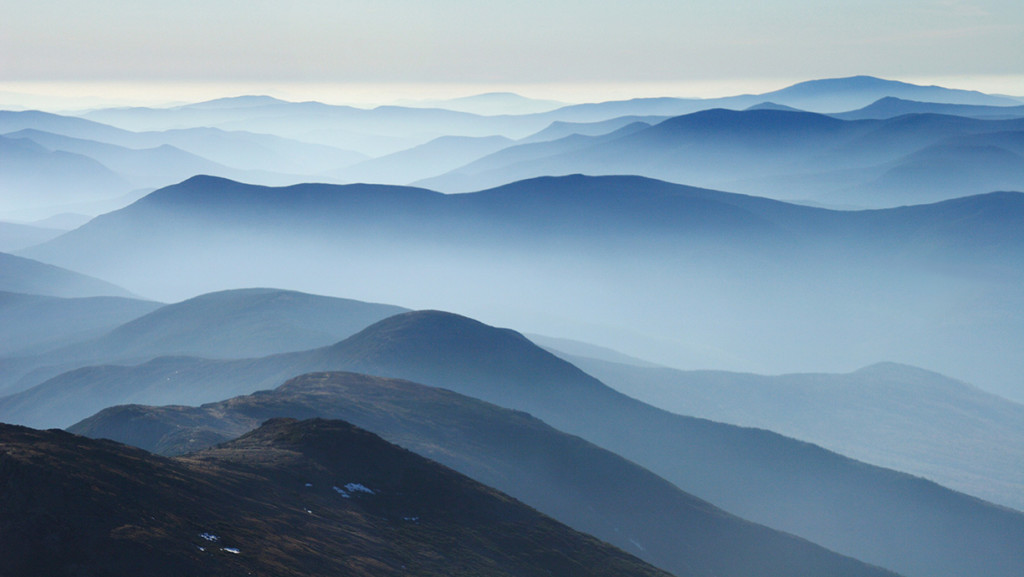 This photo was taken from Mt. Washington’s summit, at a place called Goofer Point behind the Yankee building, looking west and southwest over the southern Presidential Range, Crawford Notch and Mt. Moosilauke. Photo by Jim Salge

Frederick Strickland owns a grim first — he was the first-recorded person to die on Mt. Washington on October 19, 1849. Despite winter-like conditions, the 29-year-old Englishman did reach the summit, but was less lucky on the return trip. While on the way down, he got lost, eventually meeting his fate in the bed of the Ammonoosuc River in the Ammonoosuc Ravine.

In September 1855, 23-year-old Lizzie Bourne set out from Glen House Hotel to climb Mt. Washington with her uncle and cousin. Lizzie had a heart condition, but was determined to spend the night at Tip-Top House to see the sunrise. Like other 19th-century women, she wore full skirts, petticoats and pantaloons — yards of heavy fabric. Despite warnings of bad weather, in late afternoon they left the Halfway House and the protection of trees. Winds turned chill and damp, and clouds obscured the trail. Skirts now soaked and heavier, Lizzie faltered and they stopped for the night, sheltered behind a hastily built stone pile. That night Lizzie became Mt. Washington’s first female casualty. In the morning, clouds lifted to reveal Tip-Top House, only a few hundred feet away. A simple monument beside the Cog Railway commemorates the spot where she died. — Barbara Radcliffe Rogers 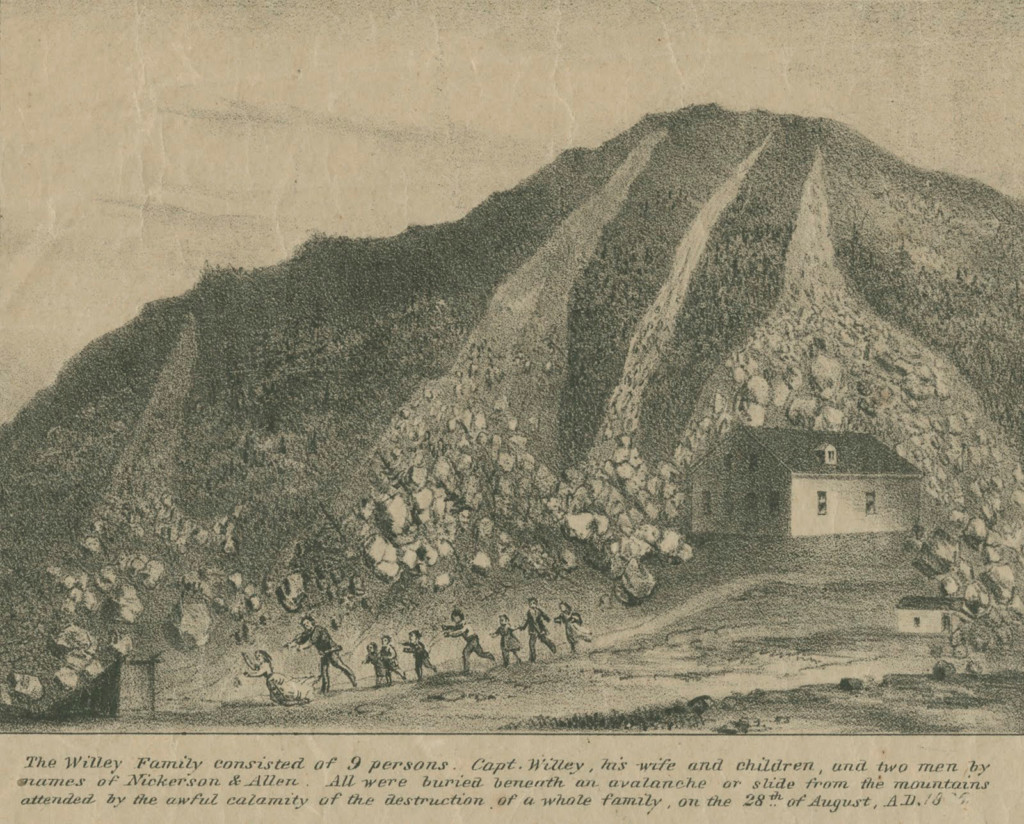 The tragic death of the Willey family in a mudslide turned the country’s attention to the White Mountains, helping to set the stage for the area — and Mt. Washington — to become tourist attractions.

The tragic death of the Willey family in a mudslide turned the country’s attention to the White Mountains, helping to set the stage for the area — and Mt. Washington — to become tourist attractions.

In 1826, the Willey Slide Tragedy turned the White Mountains into a tourist attraction. In the decades after the American Revolution, the White Mountains were still a vast, empty wilderness. Nevertheless, that is where Sam Willey decided to settle his family, at the base of what is now called Mt. Willey. During a violent rainstorm and fearing mudslides, the Willey family fled their home to a nearby stone structure they’d built for just such an event. Ironically, their would-be refuge was destroyed, killing all inside, but the mudslide missed the house entirely. Word spread, and the house began attracting tourists, and soon artists and writers were drawn as well, including Nathaniel Hawthorne, who wrote “The Ambitious Guest,” a short story about the tragedy.

In the middle of a January night in 1982, Joe Lentini’s phone rang — two people were lost on Mt. Washington in dangerous winter conditions. The temperature was around 20 below, the wind was blowing, and visibility was terrible. Still, Lentini’s search-and-rescue team set out in the early morning to find the two men. They eventually retreated, but returned the next morning. Volunteers Albert Dow and Michael Harrich were searching O’dell’s Gully where they found tracks that might have belonged to the missing climbers. As the rest of the team convened at the bottom of the mountain, Dow and Harrich began their descent. It was then an avalanche swept through, killing Dow. He was 28 years old, and is the first and only Mountain Rescue Service volunteer to die during an active mission.

In 2018, 36 years later, the Mount Washington Observatory’s summit Weather Museum rededicated the Extreme Weather Exhibit in Dow’s memory. The two climbers Dow died trying to save, Hugh Herr and Jeffery Batzer, were found a day later by an Appalachian Mountain Club employee who was out snowshoeing. They were both severely frostbitten and close to death. Herr, who was 17 at the time, lost both of his legs. Today, he’s a professor at the Massachusetts Institute of Technology, where he is the head of the bionics lab. As a pioneer in prosthetics, he creates limbs for amputees, helping them participate in sports like mountain climbing.

Across from the information desk at the Mt. Washington summit, there is a “wall of fame” where no one wants to see their name. It’s the framed “Casualties of Mount Washington” poster, a list of the 161 known deaths (a total, listed below, that keeps changing) since the state park started recording them in 1849 (presumably the mountain was just as dangerous before the list began).

The cause of most of these deaths can be summarized by the six words also tacked to the wall in a much larger font: “The Worst Weather in the World.”

An unscientific breakdown of the list, which includes several vague causes of death “indirectly associated with Mt. Washington,” reveals the following reasons as the most common:

Inevitably, some of the deaths in the park were avoidable. In two separate incidents over the past decade, two men in their 20s fell to their deaths in Tuckerman
Ravine after hiking off the trail to get a better view of the waterfall. Other incidents are more heartbreaking, involving good Samaritans dying while trying to rescue injured/missing skiers or hikers.

“Primarily, we keep this list as a respectful memorial to those who lost their lives in the Presidential Range,” says Patrick Hummel, manager of Mount Washington State Park. “It’s not meant to be sensational in any way, but it’s also a reminder to visitors about the dangers that can be present every day here.”

As of this publication’s deadline, the most recent fatal accident happened on April 11, 2019. Nicholas Benedix, 32, of Campton, New Hampshire, was buried in an avalanche while skiing alone in the Raymond’s Cataract area northeast of Tuckerman Ravine. Rescuers were able to dig out Benedix from the snow after more than 90 minutes being trapped, but he later died of cardiac arrest.

Wind speeds at the summit of Mt. Washington can exceed hurricane force (75 mph) more than 100 days per year. For tips on how to be prepared to hike the mountain in any season, visit hikesafe.com. — Darren Garnick

55.- 62.  Kent Woodward and seven other people were killed September 17, 1967 due to causes indirectly associated with Mt. Washington.

114 and 115. Eric Lattey, age 28, of River Vale NJ, and Monroe Couper age 40, of Orange, NJ died February 26, 1994, of hypothermia during an emergency bivouac atop Pinnacle Gully in Huntington Ravine.

136 and 137. Thomas Burke, age 46, of Springfield NH, and Scott Sandburg, age 32 of Arlington, MA, died November 29, 2002, in an early season avalanche when attempting an ice climb on the Tuckerman Ravine Headwall.