Just how windy does it get at the summit of Mt. Washington? 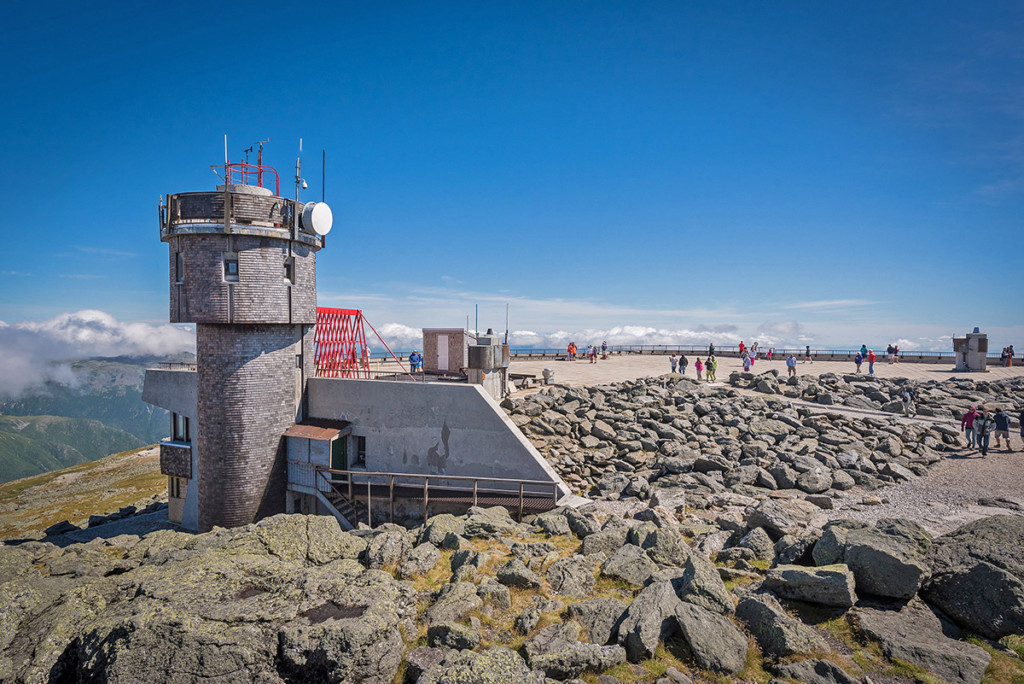 New Hampshire claims a number of firsts, but the country’s first weather observatory is not among them. At midnight on January 31, 1885, the Blue Hill Meteorological Observatory opened in Massachusetts. Over 130 years later, it’s the oldest, continuously operated observatory in the US. It’s thanks to Blue Hill that our own observatory had one less hurdle to clear when it opened in 1932 — the Blue Hill director at that time, Dr. Charles Franklin Brooks, donated both instruments and training to help the Mount Washington Observatory get underway. In fact, the anemometer used to record the 1934 world record-setting wind speed was from Blue Hill and now resides at the Weather Discovery Center.

The Mount Washington Observatory Weather Discovery Center in North Conway is an interactive science museum that’s linked directly to the summit, with simultaneous wind speed, barometric pressure and weather conditions. Hands-on exhibits designed for all ages demonstrate wind force and other weather indicators. A great favorite is the replica of the observatory at the time of the record-breaking wind velocity. The cabin shakes and creaks as the wind increases — watch the window to see the summit cat. — Barbara Radcliffe Rogers

When Charles Burroughs, rector of St. John’s Episcopal Church in Portsmouth, summited the mountain on July 9, 1845, he was so moved by the experience he wrote a short poem that was eventually published in “The Poets of Portsmouth” (1865). It still captures some of the rapture felt by first-timers looking out on the majesty of creation. Here are his first two stanzas.

Illustrious Mountain! thou dost stand alone,
The loftiest sentinel that guards our land;
The glorious images of the Eternal One;
The work sublime of his Almighty hand.
On every side what boundless prospects rise!
What oceans vast of mountain scenery!
What dread magnificence of earth and skies!
What regions of unrolled immensity!

On April 12 of this year, observers at the Mount Washington Observatory cut into a Big Wind cake to celebrate a very special anniversary; 85 years ago on that date, OBS recorded the world’s fastest surface wind speed ever observed by humankind, a mighty gust of 231 miles per hour.

The 1934 record put the young observatory on the map, and sealed Mt. Washington’s fate as home to some of the world’s most extreme weather.

For nearly 62 years, the observatory held the record for the fastest gust ever recorded on the surface of the Earth. That was exceeded by a gust of 253 mph in 1996 at Barrow Island, Australia, during Typhoon Olivia. However, unlike Mt. Washington, it was not observed by people. The 1934 wind is still the fastest surface wind measured in the Northern and Western Hemispheres, and the fastest witnessed in person.

Two of the original four founders — Alex McKenzie and Sal Pagliuca — were up top on the day of the Big Wind, and Pagliuca noted the experience in that evening’s log book.

“The wind was furiously blowing my parka out of my storm pants,” he wrote. “The hood was on my face, almost blinding me.”

The mountain still has frightful gusts — in February 2019, a 171 mph blow was measured — but the Big Wind has yet to be topped. — Dan Szczesny

So you’ve heard about Mt. Washington’s world’s-worst weather and thought, “Hey, I’d like to check that out for myself!” For a little over $1,000 in the winter and $499 in the summer, the Mount Washington Observatory invites you to stay for the night. The winter EduTrips include transportation to and from the base in a snowcat, a chance to learn about topics ranging from the science of winter storms to climate extremes, exclusive tours with the observatory staff, accommodations in the bunk room, meals and, yes, the chance to experience the mountain’s famous weather extremes. For everyone’s safety, there are health and gear requirements you’ll need to meet before embarking on the journey, either in the winter or summer. This year’s summer topics are on — you guessed it — bad weather, with the chance to learn about the science of thunderstorms or hurricanes and cyclones.

Mt. Washington — and its infamous weather — has sparked curiosity and fascination for hundreds of years. In 1870, hoping to improve their ability to forecast storms, a group of scientists braved the winter weather to gather data. Though many predicted failure, they succeeded, bringing back important information. Seeing their success, the United States Signal Service, a precursor to the National Weather Service, maintained the weather station on the summit until 1892. The station on the mountaintop was one of the first of its kind in the world.

The foundation for the current Mount Washington Observatory was laid. Forty years later in 1932, Bob Monahan, Sal Pagliuca, Alex McKenzie and Joe Dodge continued the mission and reestablished the station with a modest amount of money from a research grant and donors. Again, some were skeptical, but on April 12, 1934, the group’s hard work paid off — the observatory recorded the world’s fastest surface wind speed ever observed by humans at 231 mph. People outside of the observatory’s small founding group and benefactors began to recognize the value of such research, and it became the private, nonprofit organization we know today, dedicated to researching weather and climate, keeping a weather data record and educating the public about the mountain, its environment and weather at large.

The weather station, which has been continuously staffed since its founding, is operated by two alternating crews who live on the summit for a week at a time. Their observations are reported to the National Weather Service for use in nationwide forecasting, and they produce special forecasts for the summits of the White Mountains and the region. With data collected going back to the observatory’s founding, they maintain one of North America’s longest continuous climate records. You can learn much more at mountwashington.org.

You can experience the world’s worst weather up close and personal by volunteering at the Mount Washington Observatory, but first you have to be a member (mountwashington.org/get-involved/become-a-member). With that detail taken care of, opportunities range from light cleaning, carpentry and landscaping to working a standard shift (Wednesday to Wednesday) as an on-site volunteer planning and preparing meals for all the staff, volunteers, interns and guests (up to 17). The winter months offer the most weather action, but volunteers must complete a summer week to familiarize themselves with the station before staying over in the winter.

If a steep ascent up Mt. Washington isn’t for you, there are ways to keep tabs on what’s happening at the summit. The Mount Washington Observatory’s website lists the current conditions, and has links to a user-submitted photo journal and several webcams with various views. For Amazon Alexa users, you can now enable her to answer your observatory questions, such as the day’s forecast or what the weather was on any day from 1935 to present. She even knows a thing or two about Marty the cat. The observatory’s blog is a trove of interesting science, photos and weather explanations for those who want to take a deeper dive.

Explorer, mountaineer and mapmaker Henry Bradford Washburn is justly famous for his pioneering black and white  aerial photography of the Alps, the Grand Canyon and deep Alaska, but his very first book of images was on the Presidential Range, and a map of Mt. Washington that he produced for the Appalachian Mountain Club and the Mt. Washington Observatory is considered a classic of the art and science of cartography. The complete 1937 portfolio of 63 stunning images of Mt. Washington and the Whites was donated by Washburn and his wife Barbara (herself a remarkable explorer) to the observatory as a resource to support its work. The images, all drum-scanned from original negatives, can be purchased from the Washburn Gallery at the observatory or online from washburngallery.org. 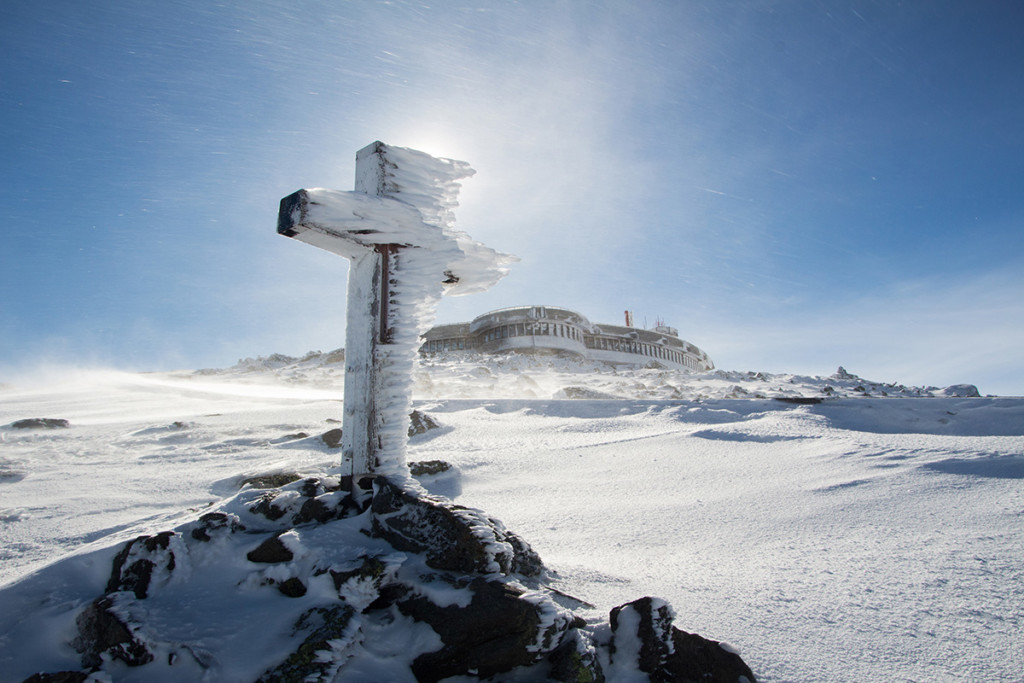 You’ve probably seen the frigid photos that look like the Mt. Washington Observatory was sprayed with white sugar frosting. Those layers and folds and spikes of white are something called rime ice, made up of a coating of tiny, opaque ice crystals formed by supercooled water droplets (or fog) freezing upon contact with an object. With so much supercooling, so much airborne water and so many curious objects, Mt. Washington is an ideal spot to observe this fascinating weather phenomenon. Rime is similar to the long lovely crystals found in lower altitudes known as hoar frost, but rime is much harder and heavier.

It’s the mountain’s favorite catchphrase: Home of the World’s Worst Weather. But is it true? Many weather geeks have challenged the assertion, so one named Ken Jones decided to do the research. Jones, a retired engineer who has traveled extensively, may have a tiny bias; he’s a longtime trustee of the Mount Washington Observatory. But he came away more convinced than ever that, in fact, when it comes to weather in all its forms, the summit of Mount Washington has it bad. He examined Canada’s Eureka weather station near the North Pole, Russia’s Vostok Station in the Antarctic and other likely suspects. His conclusion: “I’ve looked at data for Siberian locations from Vladivostok to Provideniya to Murmansk. None of these ticks off each box — the cold, wind and wet conditions — that Mt. Washington claims. Alaska, from Ketchikan to Barrow, offers no comparable combined bad climate. Pending further evidence, therefore, I have concluded that the summit of Mt. Washington, where cold, wet and windy conditions reign, is indeed the location of the world’s worst weather. Visit www.nhmagazine.com/so-is-mt-washington-really-the-worst for the complete story.