Besides the obvious skiing, adventure seekers can hike and camp out on Mt. Washington 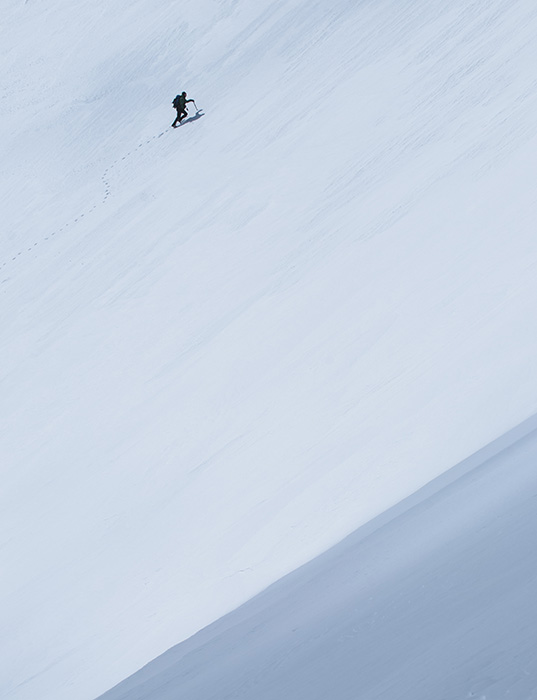 Each spring, thousands of skiers travel to the famous ravine to test their skills on some of the steepest yet most accessible backcountry skiing in the East. It’s a storied sports tradition that dates back to the early 1900s. Though it can be skied from late fall into June, April and May are the most popular months because avalanches are less likely. Tuckerman is on the eastern slope of Mt. Washington, and is named for botanist Edward Tuckerman, who studied alpine plants and lichen in the area in the 1840s and ’50s.

The large ravines that carve the upper slopes of Mt. Washington are glacial cirques, bowl-shaped depressions scooped from the mountainside. Their steep sides and headwalls were carved about 2 million years ago by alpine glaciers eroding the rock as they moved. Tuckerman Ravine is the poster child of glacial cirques, a well-rounded bowl with talus piles at its floor composed of rocks dislodged from above as the glacier moved. Great Gulf is the largest cirque and Huntington Ravine has the steepest and highest headwall. Oakes Gulf separates high ridges to the south. There are 17 in all, but some, like the Ammonoosuc Ravine, have lost their characteristic shape to erosion by mountain streams. — Barbara Radcliffe Rogers 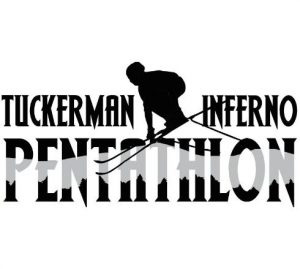 The Tuckerman Inferno adventure race is one of the most challenging in the country — and has deep historical roots. Covering approximately 36 miles, this Friends of Tuckerman Ravine fundraiser starts at Story Land in Glen with an 8.6-mile run and finishes with the difficult task of skiing down the notoriously tough ravine. Between those two tasks, the pentathlon also includes kayaking (5.5 miles), biking (18.2 miles with 2,000-foot climb) and hiking (3 miles, 2,268 feet total climb). Held in April each year since 2000, individuals and small relay teams sign up for this grueling race that’s taken place in just about every type of weather. The modern-day inferno is inspired by the legendary American Inferno races held in the 1930s, when testing one’s mettle in Tuckerman Ravine started to become incredibly popular. These races and other events at Tuckerman at the beginning of the 20th century helped create the sport of backcountry and extreme skiing — participants in today’s race are a part of a historic sporting legacy. friendsoftuckermanravine.org

Hiking Gear — My, How Things Change! 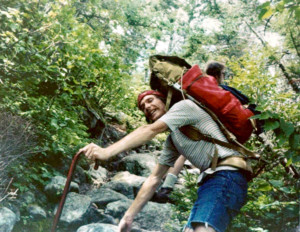 Hard to believe there was a time when hikers in the White Mountains didn’t wear Gore-Tex or wicking rain gear. Hiker Ken Bennett was only 27 years old when he and a group drove north on a whim in June 1976 to climb Mt. Washington. They took the Glen Boulder Trail up and then over to the summit.

Ken wore leather boots, a cotton shirt, jean shorts and an oversized external pack with a steel water container. He didn’t own hiking poles so instead he used an old brown cane for support.

“We had one of those instant cameras, and had no idea that there was a 4,000-footer list to climb,” Ken says. “My, how things change.”

Each October, there’s quite the sight to behold at Mt. Washington. No, it’s not foliage. Think higher, above the trees. Much higher. On October 12 this year, glider pilots from all over New England will come to the Mt. Washington Soaring Association’s “wave camp,” where they will fly the “wave” — air currents that are particularly strong on Mt. Washington. In fact, the Mt. Washington wave is the strongest in the Northeast, and some pilots have reached 35,000 feet. If you read that and thought, “Oh, fun!” instead of “Well, that sounds terrifying,” the Franconia Soaring Association offers scenic rides, introduction to soaring flights, glider rentals, flight instruction and glider towing. You can learn more at franconiasoaring.org.

Is skiing downhill not tough enough for you? Then consider the SkiMo (aka Otto Rhode Ski Mountaineering Race). Ski mountaineering is pretty much what it sounds like — it involves climbing a mountain, either on skis or carrying them, and then skiing back down. For this event on the Auto Road, racers can choose any distance they like, though attempting the summit (7.6 miles) is an option. Or choose to stop at the tree line (4 miles), where the warm SnowCoach awaits. No matter how far you go, everyone will celebrate back at the base with beer, hot showers, food, live music and prizes.

The Appalachian Mountain Club, incorporated in 1878, is the oldest and one of the most famous outdoor groups in the United States. Founded by MIT Professor Edward Charles Pickering with the goal of tracking and preserving the White Mountains of New Hampshire, the club has expanded regionally with chapters as far away as New Jersey. The AMC “hut system” maintains eight high retreats that provide creature comforts and shelter for mountain hikers in New Hampshire along with many trails, campsites and shelters throughout the Northeast. The AMC also famously administers the Four Thousand Footers Club that requires members to have hiked to and from the peaks of all 48 of the state’s 4,000-foot-plus summits including, of course, Mt. Washington.

There is nothing easy about hiking windswept Mt. Washington. Every hike is a strenuous undertaking. Inexperience and inhospitable weather can team up for one really bad day. Misadventure finds even the most prepared. Elevation matters. Have hiking experience, know the forecast, read the trail guides, and carry the essentials.

Still, Mt. Washington is a bucket list item for hikers of all abilities, but which trail should you choose?

Though the steady westside Jewell Trail is a fine choice, the busy Tuckerman Ravine Trail is a magnet for Rockpile rookies. It’s an 8.4-mile round-trip journey on the mountain’s eastside, starting from the bustling AMC’s Pinkham Notch Visitor Center with its staff and store for last-minute tips and items. There’s a 4,000-plus-foot elevation gain to the more-than-mile-high summit, and the trail passes by the Hermit Lake shelters, called HoJos by old-timers, near the floor of the ravine. Tuckerman, the famed vista-filled glacial cirque, which often holds snow into summer, is named after botanist Dr. Edward Tuckerman, and its impressive headwall is favored by spring skiers. The ravine is followed by a rocky stretch to the summit.

The mountain’s above-the-tree-line sections provide scenery unrivaled in the East, revealing a tundra-like landscape with tremendous rocks, fragile plants, and sweeping views to the Atlantic Ocean and awe-inspiring mountains. For a stunning clear-weather selfie, the storied 8.5-mile long Crawford Path, turning 200 this summer, gets a nod as most scenic. Considered the oldest continuously maintained footpath in the country, it’s part of the Appalachian Trail. Use it with the Ammonoosuc Ravine Trail for a memorable 9-plus mile round-trip trek on the mountain’s westside.

Washington’s challenges are real, and the notorious Huntington Ravine Trail has the well-deserved reputation as the most difficult in the White Mountains. Steepness, scrambling up a precipitous talus slope called The Fan, severe ledges and exposure can create a nerve-racking day for some, while a formidable challenge for others. Throw in wet surfaces and ice, and the trail can be downright dangerous. Descending it is not suggested, as a fall in certain spots can have serious consequences. The trail is used as a 4.4-mile, one-way trek along with the Tuckerman Ravine Trail and Nelson Crag Trail to the summit.

The AT and Mt. Washington 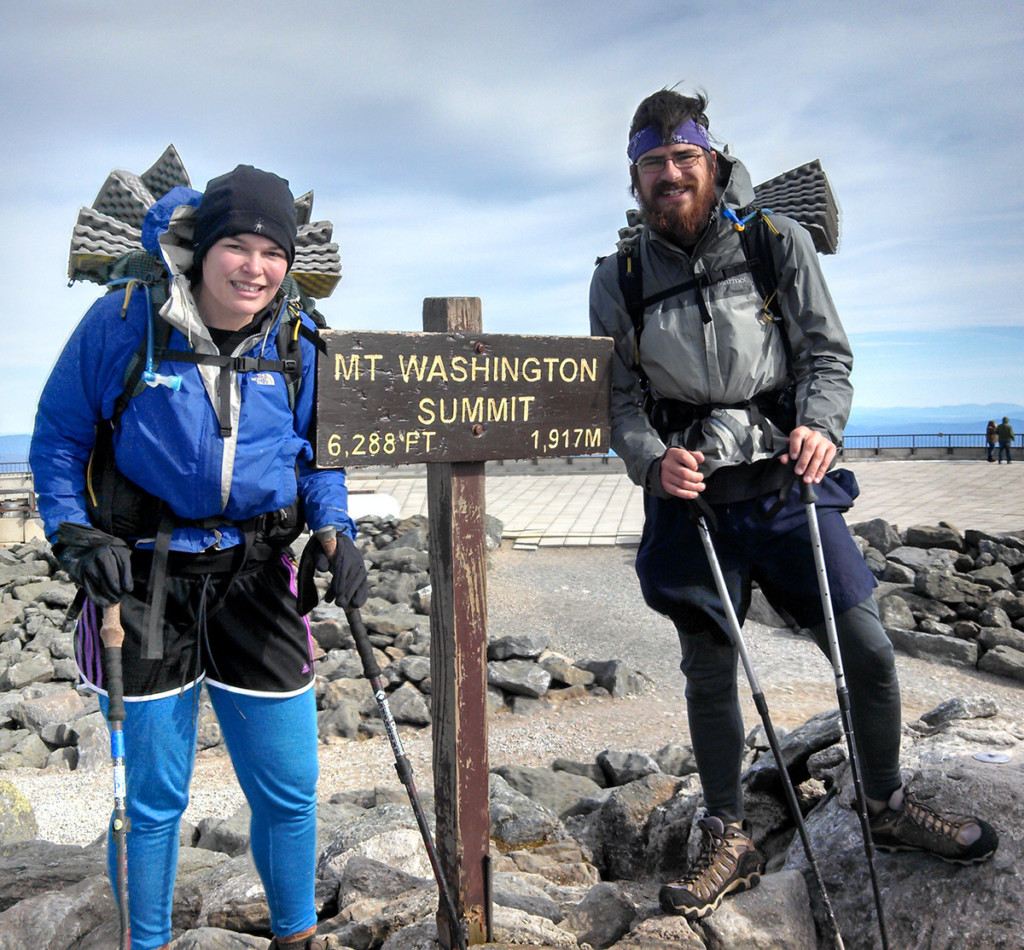 Maggie Wallace at the summit.

Anyone who’s hiked part of the Appalachian Trail knows that the trail part is secondary; it’s a path made of mountains. There’s Clingmans Dome, the highest mountain on the trail. And then, of course, there’s Katahdin — the terminus of the AT in Maine — where the famous weather-beaten sign welcomes finishing thru-hikers. But for me, the apex of the trail, the mountain I was always walking toward, was Washington. Although I was from New Hampshire, I hadn’t actually climbed Washington when I started the AT. I was saving it, hiking the peaks that overlooked it, and knowing that one day I would “earn” the summit (with all the romance of being in my early 20s) by walking there from Georgia. I think, as a result, I had Washington built up in my mind as this unconquerable Goliath, all rime ice and rock edge. True to its reputation, when I finally climbed up onto the ridge in early September, I had to hike 5 miles in a low-visibility hail storm and seek shelter on the floor of the Lake of the Clouds Hut. Thru-hikers can’t be choosers; hiking an unbroken line from Georgia to Maine means that you can’t always pick your weather. But being caught in that storm also meant I could summit just after dawn, when the cloud sea gave way to a rare day of max visibility. I summited in time to see the first train of the day come puffing up the mountainside and unleash a crowd of people. It was a surreal experience. After nearly 2,000 miles of continuous hiking and a lifetime of standing in the shadow of the mountain, I waited in line to take a picture of the pinnacle sign. All around me stood tourists in flip-flops and jeans, eying my teal long-johns. “Did you hike up here?” One of them asked me, and I was able to answer them, “Yes, I did.” — Maggie Wallace

Once, I hiked Mt. Flume via the Osseo Trail. I heard, “Help us!” from the Flume Slide, a dangerous trail. A couple hiked past the warning signs and ended up stranded. Later, I drove them back to their car.

“Hike Safe” is a guideline encouraged by the NH Fish and Game and the US Forest Service.

Be prepared, be knowledgeable, leave a plan. Stay together, turn back in bad circumstances.

There’s been two deaths on Mt. Washington in 2019, a climber in February, and a skier in April. Soon, visitors will be flocking to the White Mountains. Many visitors will ignore warning signs and attempt photo shoots or dangerous climbs. Follow the Hike Safe guidelines as though your life depends upon it, because it might. — Marianne O’Connor, author of “Haunted Hikes of New Hampshire”

One of the most audacious trips to the summit was taken by Carmeno Onofrio, who made aviation history by landing the first airplane there on March 12, 1947. Because of treacherous weather, he had to try three times before he set a ski-equipped, 65-horsepower 1937 Piper Cub down on the peak. He went on to make a dozen more trips the next day and a total of more than 40 landings over several weeks, hauling equipment, supplies and passengers for a weather project on the summit.

Onofrio was manager of Berlin Airport, north of Mt. Washington, during those years as World War II raged across the sea.

A UPI news report of Onofrio’s death in 1982 quoted Clarence Brungot of Berlin, an amateur pilot who had known Onofrio for 40 years. “‘[Onofrio] built his first airplane way back in the ’20s. He just experimented, learned to fly himself,’ said Brungot. ‘He was quite a mechanic. He built all kinds of different machinery. He was a welder, a licensed airplane mechanic. He was always puttering with something. He built his own snowblower to blow snow off the runways at the airport,’ Brungot said.”