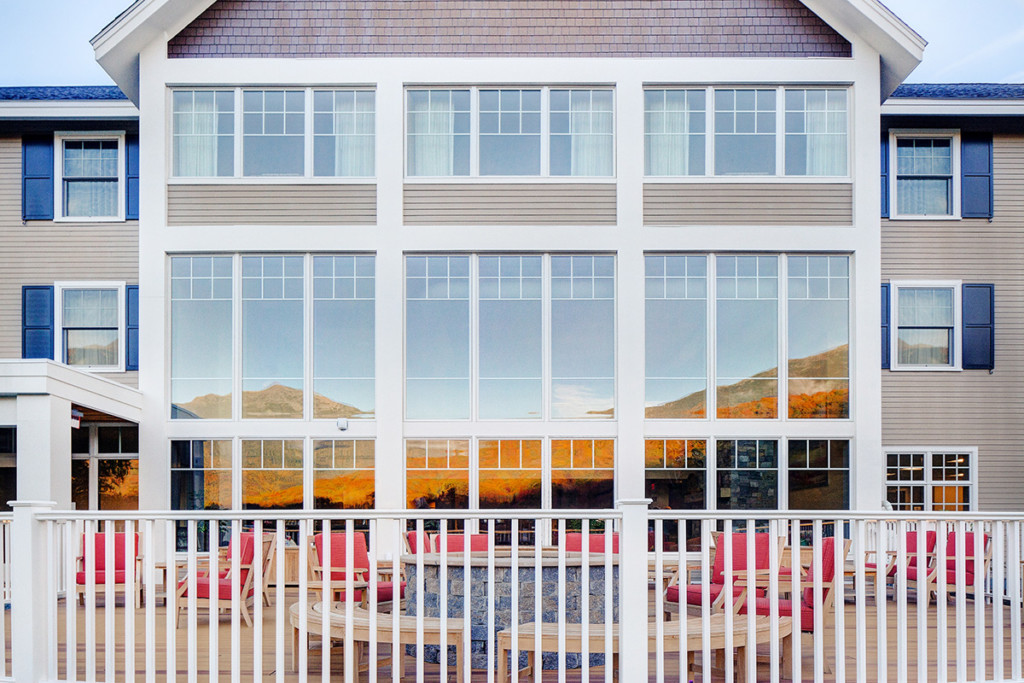 The new Glen House at the base of Mt. Washington.

It’s not the place to go if your goal is roughing it in the wilderness, but the Joe Dodge Lodge at Pinkham Notch is full of rustic touches and within easy reach of the top of the world or the middle of nowhere. Open year-round, the lodge offers accommodations like private rooms and bunkrooms with hallway bath, plus towels, linens and soap. Dinner and breakfast are included in most room packages. Guests can also enjoy a wide variety of free, walk-on programs, from guided day hikes to evening talks on astronomy and other topics.

“He knew they liked to hear him swear, so he would accommodate them,” the Saturday Evening Post wrote of Joseph Brooks Dodge, beloved, admired and sometimes feared around Pinkham Notch, at the base of Mount Washington, for 51 years. Porcupines dominated the area in 1922, when Joe Dodge brought his outsize personality to the Appalachian Mountain Club’s cabins there. By 1928, Dodge had been promoted to AMC hut system manager. Until 1959 he built and transformed the huts.

Dodge not only ran huts and trained their staff, he rescued hundreds of the lost. He once said he would find them by heading away from where a sensible person would go. In 1932 he cofounded the Mount Washington Observatory. In 1955, Dartmouth College awarded him an honorary degree and called Dodge “a legend of all that is unafraid, friendly, rigorously good and ruggedly expressed in the out-of-doors.” — Christine Woodside, author of “Libertarians on the Prairie” 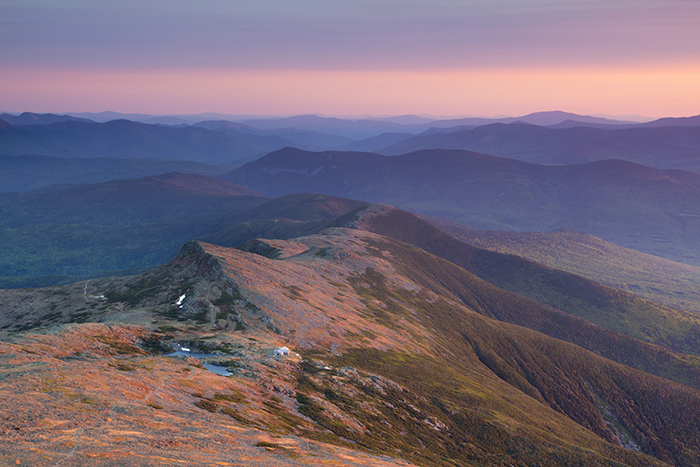 Lake of the Clouds AMC hut Photo by Jim Salge

Within the Appalachian Mountain Club’s hut system, there are eight locations in the White Mountains known as the high huts. Placed about 6 to 8 miles apart along the Appalachian Trail, they give thru-hikers (those tackling the entire trail) and others a chance for a good night’s sleep and hot meals or simply a place to rest before moving on. The highest and most popular of this elite group is Lake of the Clouds, which is perfectly situated for those who want to climb Mt. Washington. You can get there via the 7-mile Crawford path, then use the hut to recharge before finishing the last 1.5 miles to the summit. The hike to the hut is difficult, but the views are unbeatable. If you’ve never experienced the unique beauty of the alpine world above the tree line, put Lake of the Clouds on your bucket list.

When the Mount Washington Carriage Road (as it was known then) began in 1854, a small house was built at the 4-mile mark to house supplies and shelter workmen. Climbers stopped there to rest even before road reached the shelter in 1856. Road construction continued, and in 1857 a new structure was built to collect tolls and provide a stop for travelers on the mountain. It served that purpose until it burned in 1984. Today the site is a scenic pullout where motorists and Mount Washington Auto Road vans stop to cool brakes and engines; in the winter it is the destination of SnowCoach tours. 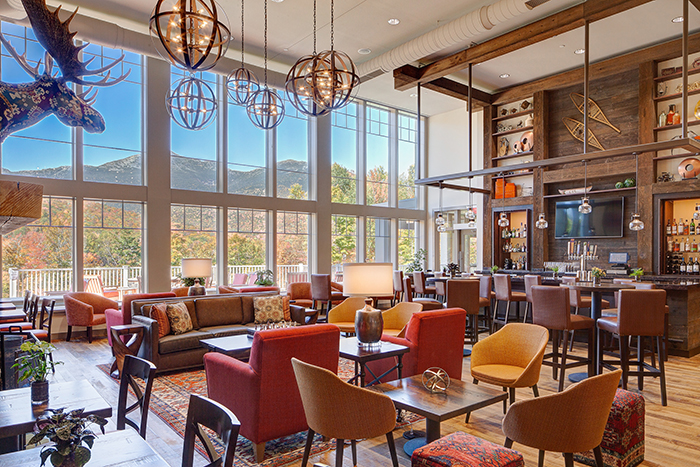 The beautiful bar and lounge area at the Glen House features floor-to-ceiling windows that look out onto stunning views.

Is the fifth time the charm? After four fires and four iterations of The Glen House, the brand new version is open and ready for guests.

The Glen House’s history goes back to the 1850s, when John Bellows created a hotel out of a farmhouse to provide accommodations for visitors who arrived via the newly completed Grand Trunk Railway. In 1852, the property was purchased by Col. J.M. Thompson and renamed The Glen House. Guests were greeted by stunning views of Tuckerman Ravine and the northern Presidential Range. The hotel’s location offered the opportunity to visit the area’s rugged natural attractions, such as Mount Washington, with the luxury of game rooms, parlors, library, lawn tennis and croquet. Unfortunately, the hotel was devastated by fire three times between 1884-1893. After the third fire, the hotel survived a number of years before burning down yet again in 1967.

Howie Wemyss, general manager of the Mount Washington Auto Road, played a large role in the recent opening of the fifth hotel in the Glen House line. “We’ve been talking about bringing this historic hotel back for years,” says Wemyss. “It is nice to return to our hospitality roots, and complete the picture that we started talking about 25 years ago.”

The new Glen House Hotel has been a long time in the making, but Wemyss says extra time to plan turned out to be a blessing in disguise. “We were ready to start building in 2008, but the recession put it on hold,” he says. “That added time allowed us to come at it again with fresh eyes and a greater push for sustainability, and the finished result is unlike anything we could have ever imagined.”

The new hotel opened in September 2018, and is complete with geothermal heating and cooling, LED lighting, energy-efficient elevators and more. The hotel also features 68 rooms, an indoor heated saltwater pool, and full-service restaurant, The Notch Grille.

“The hotel was built with the future in mind,” says Wemyss. “We wanted to make sure we honored the hotel’s history and family legacy, while also giving people a place to create memories with their families for years to come.” 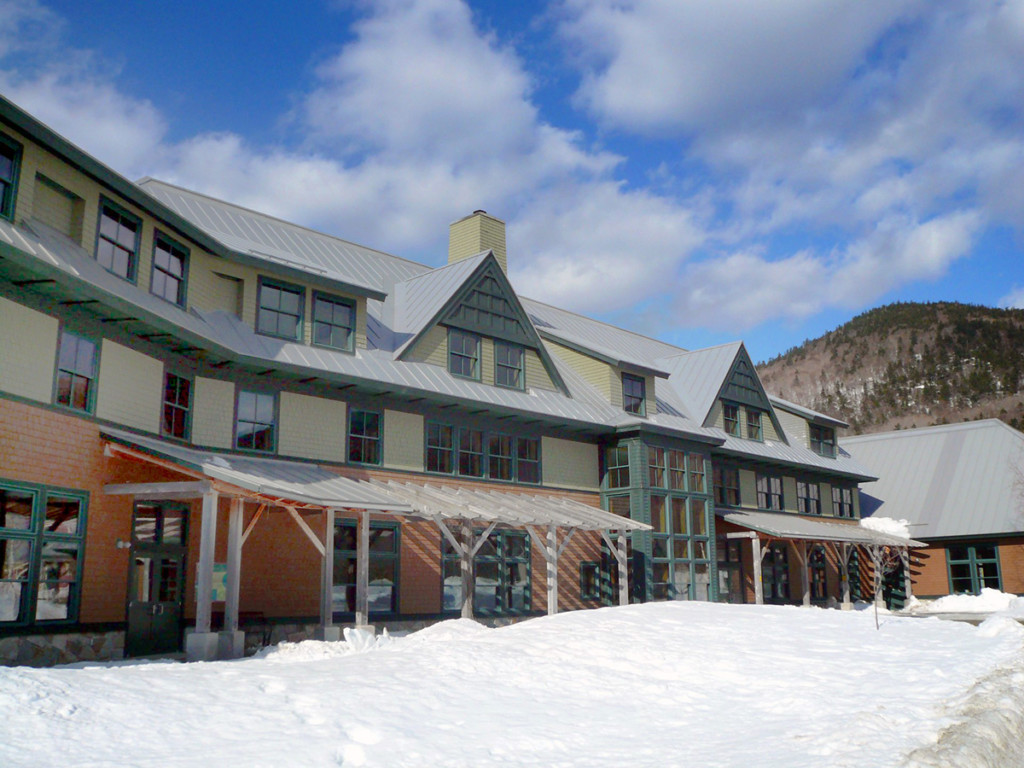 “Spectacular” and “magnificent” are a couple of the words commonly associated with the White Mountains’ Crawford Notch, but they also apply to the AMC’s premier White Mountains lodge, the Highland Center. Great food prepared by a dedicated staff includes a full buffet breakfast and dinner by the fire or in your room (private or shared bunks) is available. The Highland Center is home to the official AMC Library & Archives, with thousands of documents, maps, photographs, and other items dating back as far as the club’s founding in 1876.