Besides strong winds, you'll also find the Tip-Top House, post office and a rare flower at the summit of Mt. Washington 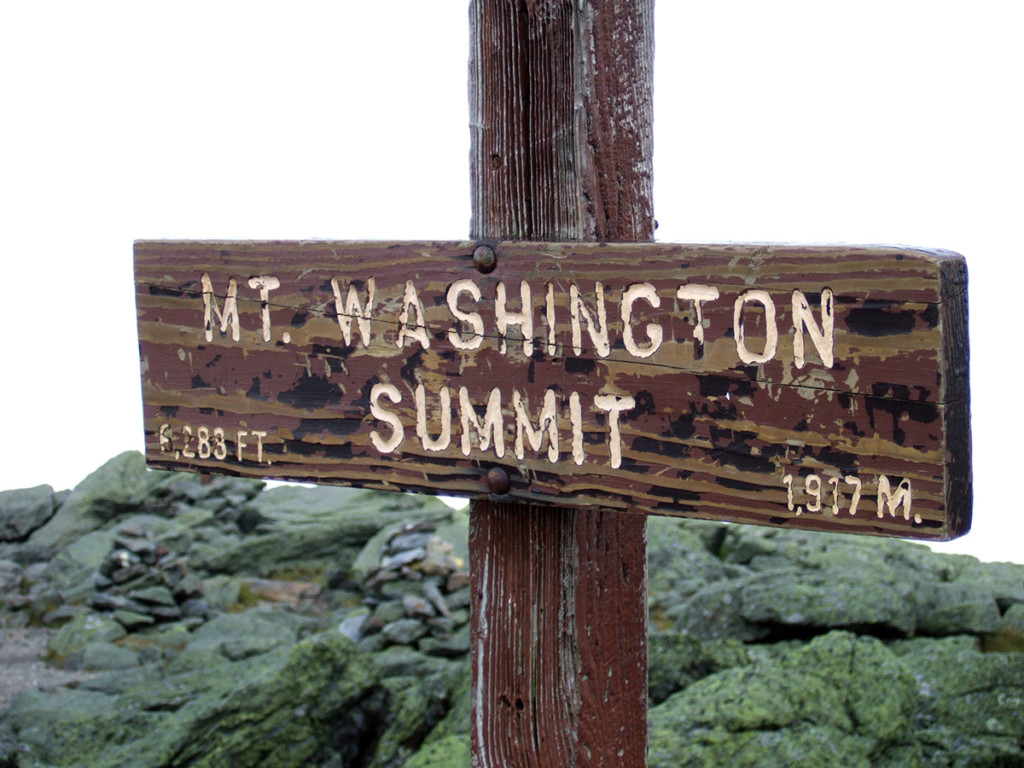 Is the summit sign the most photographed image of all time? Probably not, but it sure makes a ton of appearances. Hikers and other summit visitors often wait in lines to have their picture taken with the unassuming elevation marker. It’s even recognized as a symbol of New Hampshire by the folks at Trader Joe’s, who created their own version (with an incongruous lobster trap) at their new Bedford store.

Elevator doors open and close with no occupants. Doors slam. Empty stairs creak. Items are rearranged. Lights flash. People working on the summit could swear they’re alone when they feel something in the room, turn around and find only themselves. Some say it’s “The Presence.”

What a better place for scary tales than the eerie Mt. Washington summit, with its blankets of fog, howling winds, unearthly isolation, deep darkness and blinding snow. Factor in more than 100 recorded deaths on the Rockpile and alpine folklore flourishes with the ghostly Presence. The phantom incidents are repeatedly linked to the spirits of those who died on the mountain, as it is said the Presence is more active following a summit fatality.

Other possible explanations? The long line of summit house cats roaming about, scurrying hard-to-see small mammals like mice and voles, mischievous colleagues, hikers popping in at odd hours, and science with its atmospheric oddities.

Of course, working alone at night on an isolated mountaintop leaves much open to the imagination in a place known as “home of the world’s worst weather,” with its commanding winds creating mysterious auras with each great gust. — Marty Basch

The oldest surviving building on the summit of Mt. Washington, called the Tip-Top House, now contains exhibits and artifacts of the mountain’s history, but was originally a hostel. In fact, it’s said to be the oldest existing mountaintop hotel in the world. It was built with mountain rock for $7,000 by Samuel F. Spaulding, and beginning in 1877, it served as the printing office for the mountain’s official newspaper, Among the Clouds.

News from Among the Clouds

In 1874, Massachusetts journalist Henry Burt spent a stormy night in the Summit House on Mt. Washington. The winds inspired him to start a summer newspaper up there. Three years later, inside the old Tip-Top House building, Burt published the first Among the Clouds. By 1885 he’d built its headquarters.

Chatty articles promoted the region, predicted weather, and — in brilliant marketing — printed names of guests at local hotels and riding the Cog Railway. Tourists eagerly spent 10 cents on souvenir copies. An article described the view of distant Portland, Maine, “as a low white hill, with a long light blue line beyond it.” In 1881, Burt described the moon over clouds as “almost in fairy land.”

Burt died in 1899, and his son Frank H. Burt took over. The building burned in 1908, but Frank rebuilt and continued until 1917. A journalist can’t ask for a better beat. — Christine Woodside, editor of the Appalachia Journal

The first Summit House opened in 1852, and was enlarged in 1853 to accommodate 60 overnight guests and 150 in the dining room, a popular stop for Cog Railway day-trippers. Guests retired with candles to upstairs guest rooms warmed by steam heat, and during storms, bellmen were ready with wooden panels to replace window panes shattered by the wind. A larger Summit House opened in 1873, destroyed by fire in June of 1908, and in 1915 a third opened, eventually replaced by the Sherman Adams Building. In 2016, Cog Railway owners proposed building an upscale hotel on railway land a mile from the summit; backlash from conservationists and hikers’ groups was almost immediate, but the plan is still on the table. — Barbara Radcliffe Rogers 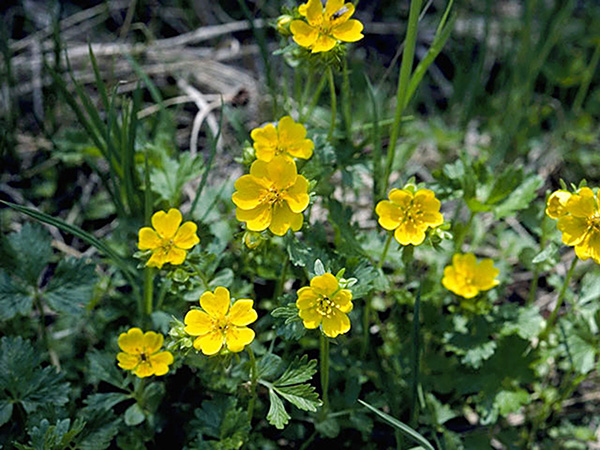 When you think of Mt. Washington, you probably picture gusting winds and a snow-and-ice-covered summit. While that’s certainly the case sometimes, it’s actually home to fascinating plant life, including the rare Robbins’ cinquefoil. In fact, it’s likely the rarest plant in New England, found only in the alpine zone of New Hampshire’s White Mountains, including Mt. Washington. The flower, a member of the rose family, was first discovered along the Crawford Path on Mt. Washington. It grows in some of the harshest conditions you’ll find, withstanding freezing temperatures and those infamous high winds. The flower was put on the endangered species list in the 1980s, and trails were ultimately rerouted away from the flowers, helping them recover. To do your part to protect the Robbins’ cinquefoil and other fragile, endangered plant life, always make sure to keep to the trails, and be mindful of your steps.

According to “The Indian Heritage of New Hampshire and Northern New England” edited by Thaddeus Piotrowski, long before European settlers arrived Mt. Washington was known by the locals as Kodaak Wadjo (“the top is so hidden” or “summit of the highest mountain”) or Agiochook or Agiocochook (“the place of the Great Spirit” or “the place of the Concealed One”). The Algonquians called it Waumbik, or “white rocks.” Contemporary natives often affectionately refer to it as simply “the Rockpile.”

Horse Race to the Top 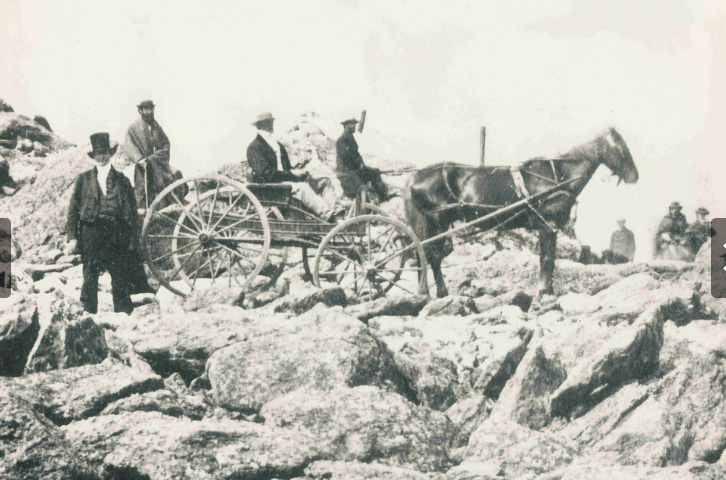 The gala opening of the road to the summit took place on August 8, 1861, with many local dignitaries arriving at the summit in a Concord coach. But the honor of driving the first horse-drawn vehicle to the summit went to Col. Joseph Thompson, then proprietor of the Glen House. To be sure of beating out his friendly rival, Col. John Hitchcock, landlord of the Alpine House, Thompson drove his horse and carriage to the summit three weeks before the official opening. The last few yards were still so strewn with boulders that help was needed to keep the carriage upright, but he made it. And he saw to it that a photographer was there.

After the road was opened to the public, its business doubled every year until 1869. That year, the Cog Railway was completed, on the west side of the mountain, and many found the relatively short trip and enclosed cars preferable to an all-day journey on the road in open mountain wagons. — Excerpted from “History of the Road” at mtwashingtonautoroad.com/history

In 1819, early settlers Abel Crawford and his son, Ethan Allen Crawford, built the first footpath to the summit. It is the oldest continuously maintained footpath in the eastern US.

Completed in 1861, the road to the summit of the Northeast’s highest mountain was originally referred to as the Mt. Washington Carriage Road. Motorized vehicles were still several decades away from invention, and hearty travelers braved the elements and rough conditions in horse-drawn wagons for the four 4-hour trip to the summit.

On August 31, 1899, that changed with the first motorized ascent of Mt. Washington.

Freelan O. Stanley, of Stanley Steamer fame, climbed the road as a publicity stunt for the Locomobile Company, which had recently bought the manufacturing rights to his new invention. Freelan and his wife Flora drove their Locomobile from Newton, Massachusetts, to the summit of Mt. Washington — a trip which took five days to get to the base of the mountain, and then 2 hours and 10 minutes to drive to the summit.

Mrs. Stanley wrote of the event: “We went on and up, up, still up, the continuous climbing being varied only by a steepness so excessive that as we looked ahead to it, we felt a sickening anxiety lest each brilliant dash should be our last … Our engine, panting and quivering, never failed us, but pushed us bravely over seemingly impassable heights.” — Crispin Battles, marketing director for Mt. Washington Auto Road

Despite the recommendations of a special governor’s commission to study the options, when the Mt. Washington summit buildings and Cog Railway were offered for sale to the state of New Hampshire, the state decided to buy only the summit and to replace the hotel with a single building. The Sherman Adams Visitor Center opened in 1980, accommodating a maximum of 400 people, far short of the numbers anticipated even then. The building houses a small cafeteria and tables, the post office, restrooms, a gift shop, the Mount Washington Observatory and its museum. — Barbara Radcliffe Rogers

The highest post office in the eastern US is a single tiny room in the Sherman Adams Building at the summit. It is primarily used by visitors to send mail to friends and relatives with a unique postmark. Thru-hikers on the Appalachian Trail sometimes think they can receive mail there, but for that service they must use the AMC Center at Bretton Woods. The ZIP code for the top of New England’s highest mountain is 03589. — Barbara Radcliffe Rogers

Downstairs in the Sherman Adams Visitor Center, the small Mt. Washington Observatory Museum contains exhibits on extreme weather, the formation of rime ice on towers and buildings, cold weather gear, animals of the alpine zone and other subjects relating to the summit and its weather. — Barbara Radcliffe Rogers