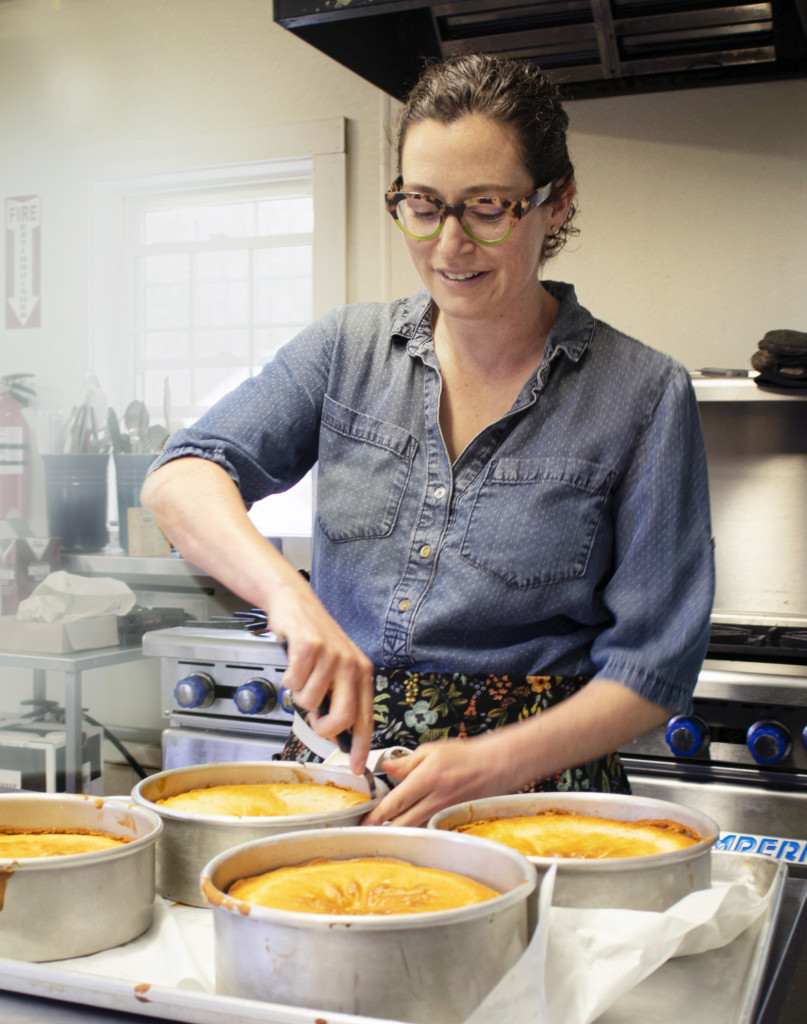 Running a farm can be a charmed life, but it’s a tough business. The numbers don’t always work when you subtract taxes, feed, supplies and the endless maintenance from what goes to market. Doing one thing no longer works — there is a strong need to diversify.

Sarah Heffron and Craig Thompson are more than pig farmers. The duo ran a small farm in South Carolina and were wooed to New Hampshire by Heffron’s mother. The charm of Harrisville, one of the prettiest towns in the state, was irresistible. They found land with two houses and eight outbuildings, all just a country mile from the classic Harrisville General Store. That was the good news.

Unfortunately, most of the buildings were in “ramshackle” condition, says Heffron, and the property had not been a working farm for many years. The old buildings were beyond repair and had to be buried, burned or removed, but over the years, the couple has been adding roads and fencing, and replacing those buildings. Early on, grants from the Natural Resources Conservation Service really helped the farm turn a corner.

Driving onto the property now, a brief turn off a dirt road, reveals a very tidy setting with a scattering of picture-book farm buildings set in a hollow that’s surrounded by woods. With two sweet dogs waiting, you could say it’s idyllic. The property is now officially considered a “Farm of Distinction” by the state.

The renovations include a commercial kitchen in a former kennel, plus space for a farm store to sell creations from the kitchen and other interesting foodstuffs Heffron has found in her travels. Imported olive oils, local ice cream, eggs, Mayfair Farm logo hats and T-shirts, and their own maple syrup round out the offerings. The freezer holds cuts of lamb and pork raised on the farm. 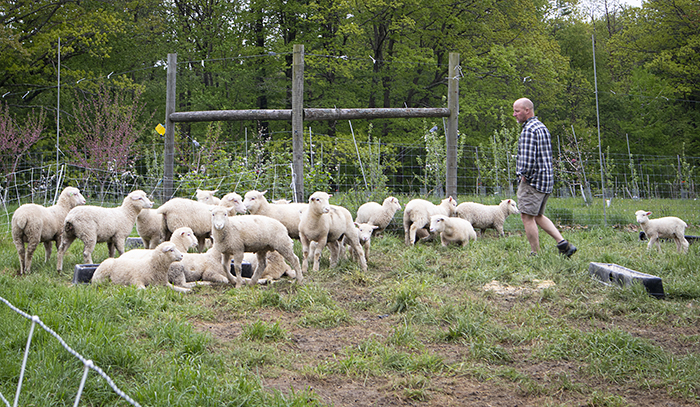 A small shed holds a few geese, “an experiment,” says Heffron, mostly to provide chores and business opportunities for her two children, ages 9 and 7, to sell the prized eggs.

A few other experiments failed — raising cattle for beef, chickens for eggs, and blackberries for jam — all were deemed not worth the effort.

The main cash crops from the farm are heritage breed and commercial pigs, with the former raised in the backwoods, where they enjoy wallowing in mud and rooting for grubs. Also on the hillside are cohorts of sheep grazing in the grass, adding pastoral charm and to the bottom line. In the surrounding fields, Thompson has planted several apple groves for pick-your-own selling. The one he planted four years ago is now deemed “The Old Orchard,” as the land continues to be utilized for more apples and other diversified crops.

A small house on the property called Mayfair Cottage is available on Airbnb for additional revenue or offered to wedding parties as a guest house. 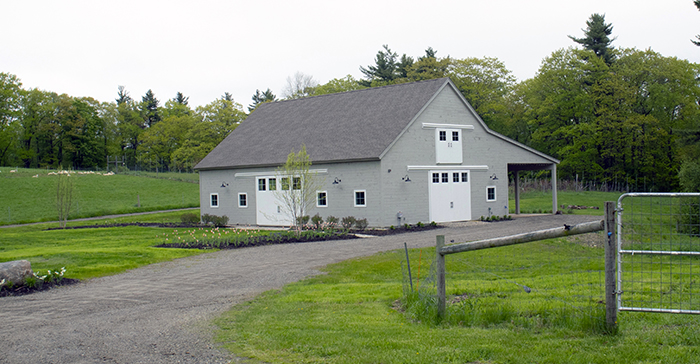 The event barn at Mayfair Farm is a recent addition. Photo by Susan Laughlin

But it’s Heffron and her culinary background that defines Mayfair Farm. Her almond cake won a Yankee Magazine award, and is distributed to 20 Whole Foods and 15 other independent grocery or fine food stores in the Northeast. The farm store has gourmet-to-go meals, quiche and chicken stock, all from the kitchen next door. But the main event is catering for weddings, primarily on-site.

When the pig barn burned to the ground last year, it was quickly replaced with a barn-like event space, mostly for those weddings. One year they catered 14 weddings in a row on- and off-site, but Heffron prefers to manage the schedule to allow time for a few farm dinners, which are open to the public. Yes, the space is a delight for the bride seeking a rural wedding, but it’s Heffron’s food that’s the big draw.

Mayfair Farm is open to the public for their annual farm dinners.They are all sold out for the year, but in the fall they will be offering a dessert and dance party. Sign up for their newsletter to get the news first.

A recent spring menu lists six appetizers, including lamb meatballs with harissa and house-smoked salmon on endive with sorrel sauce. Then a plated salad with local greens, chèvre and edible flowers, followed by mains served family-style, including chicken with morels, wild rice salad with pecans, currants and mint, plus a braised beef dish with turnips and snap peas. In addition to a display wedding cake of lemon with berry buttercream from preserved local berries, Heffron also provided vanilla and chocolate pots de crème.

Pork and lamb from the farm are worked into the menus, along with herbs from the garden. Other ingredients are sourced locally too, including eggs from Granja Gloria in Marlborough, chicken from Walpole Valley Farm and beef from Barrett Hill Farm in Mason. Heffron uses Monadnock Menus, a local distributor, to find local products in season that are delivered to her doorstep. 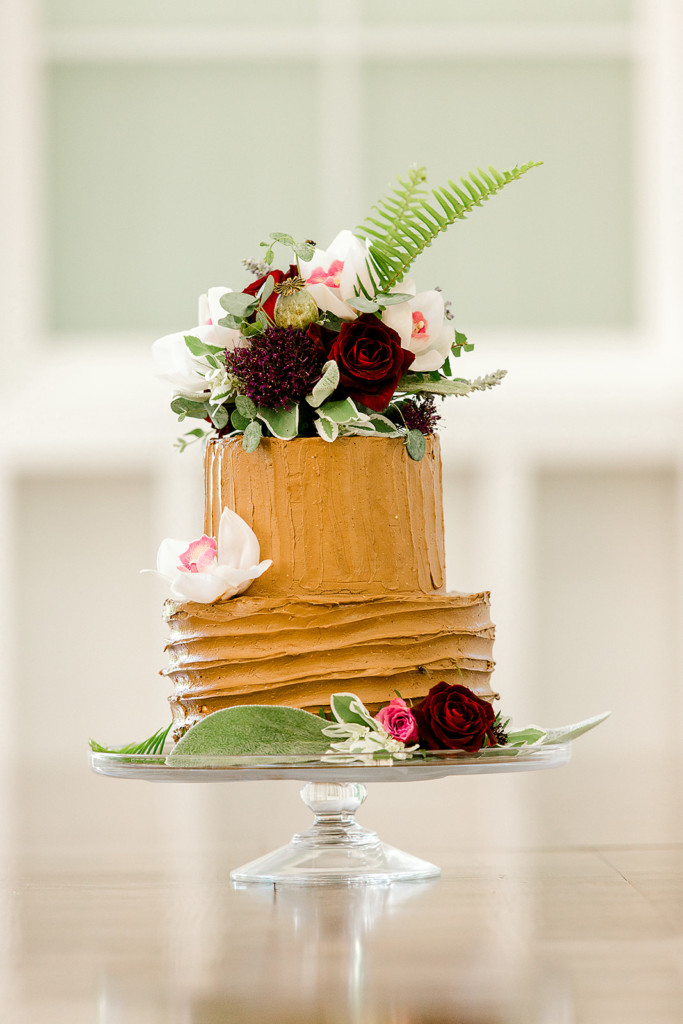 Heffron has always had a love affair with food, but does not have traditional culinary training. Traveling to Bend, Oregon, she studied with Marda Stoliar, a famed baker, and learned the art of laminated pastries, including croissants. Later she took a wedding cake course at the Institute of Culinary Education in NYC. She says, “Their cake recipe was so sweet even the kids wouldn’t eat it … we finally fed it to the pigs.” Sometimes hands-on experience and an aim for the best brings the desired result.

With all her experience and study, Heffron readily admits her “secret weapon” is her mother, Barbara Michelson, who has a Grand DiplÔme from Le Cordon Bleu, Paris. Michelson found success with food early, when she and her husband ran a small farm on Long Island and sold vegetables to famed chef Thomas Keller in the city. She later developed a mail order business for her brownies that included dessert shops and Macy’s in New York City. Finally, The New York Times ran her recipe, calling it the “Gold Standard for Brownies.”

The good news is the recipe is in Michelson’s cookbook, “Leave Nothing on the Back Burner: My Happy Cooking Life,” and the famed brownies and cookbook are both available in the Mayfair Farm store. A s

equel, a memoir-style cookbook, will be available this fall, with a big chapter covering “Ramshackle Acres.” Michelson, who lives in nearby Nelson, still helps out in the kitchen when needed. Family farming never tasted so good.

Heffron has plenty of stories to tell about life on the farm. And there’ll be many more, as this family farm in New Hampshire braves another season balancing the whims of weather and the joys of baking. And then another.