Live Free and/or Weird: Heroes in a New Hamp-shell

Why not make a "Teenage Mutant Ninja Turtle" statue in Dover? 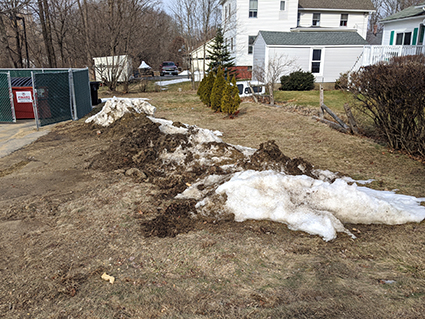 The site of Peter Laird’s former home in Dover. Wouldn’t this look better with a TMNT statue or two (or four)?

New Hampshire isn’t really known for being a cultural touchstone. Every once in a while, someone exits our borders and becomes famous. John Irving. Triple H. Sarah Silverman. A few movies have been filmed here. “On Golden Pond” put us on the map for a while back in the early 1980s. We got super-close when the American version of “The Office” was almost set in Nashua. But mostly we’re not supposed to be a cultural touchstone. That’s why J.D. Salinger hid here.

But our real cultural claim to fame has been hiding under all of our noses. Down in the sewers.

In late 1983, aspiring comic book artists Kevin Eastman and Peter Laird invented the “Teenage Mutant Ninja Turtles” while trying to make each other laugh in Laird’s home in Dover. They took the idea and self-published the first issue of the comic, which sold out and eventually exploded into a worldwide phenomenon crossing all media and merchandise. No child growing up in the 1980s didn’t know about TMNT. Nor any child of the ’90s. Or the ’00s. Or the ’10s. The “Teenage Mutant Ninja Turtles” to this day, almost 40 years later, are still appearing in comic books, toys, movies and animated series. All because of a doodle in Dover.

Eventually, TMNT HQ (Mirage Studios) moved to Northampton, Massachusetts, where it is today. And the house at 28 Union St. in Dover that sheltered the birth of the “Teenage Mutant Ninja Turtles” … was torn down in 2011, decades after we should have known better. Today it’s a mere blank space in the neighborhood. There was nothing on the property when I visited but a Dumpster and some dirty snow.

I mean, we have an Archie statue in Meredith because the illustrator of that comic was from there. We definitely should have some Ninja Turtle statues in Dover. We’d all benefit from a little Turtle Power.

J.W. Ocker lives in Nashua and writes spooky novels and travelogues. His next book, Cursed Objects, debuts in September and is up for preorder. Visit him at oddthingsiveseen.com or send him New Hampshire oddities that he should visit at ockerjw@gmail.com.