“Horrible Scenes Enacted in a Hell of Fire and Smoke” 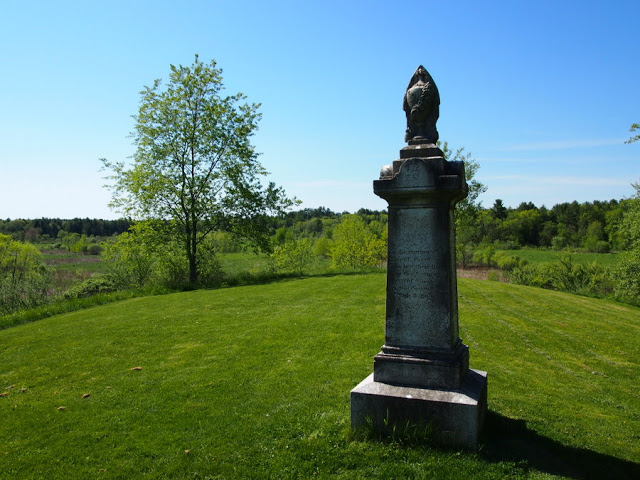 Not every New Hampshire oddity is a happy oddity. In fact, a lone stone column on a hill in Dover testifies to an event that is extremely sad — the oddity of which is that lone physical testament to its occurrence.

The area around that memorial used to be part of the Strafford County poor farm, where the impoverished and indigent were housed. Some of the paupers were also mentally ill, and those unfortunates were placed in a dedicated building on the property — the Dover Insane Asylum, named as such back when “insane” was a medical term and not one relegated to horror movies.

Also called the Strafford County Asylum, the building had two stories and an attic, all three levels of which held a total of 56 cells — which is probably a more appropriate term than rooms, as the Dover Insane Asylum wasn’t a medical facility. Each person was locked into their cell, an act which contributed greatly to the tragedy.

During a snowstorm in the winter of 1893, a fire started in the building, possibly by a smoking inmate. It was a small fire, no bigger than a “bushel basket,” according to the investigators, but due to negligence and the general unpreparedness of management around the state of the property and its procedures, that bushel basket grew to encompass the entire building, killing 41 of the 44 inmates.

The headlines of the day screamed, “Forty Crazy People Burned to Death” and “Horrible Scenes Enacted in a Hell of Fire and Smoke.” A New York Times article published the day after was titled “A New Hampshire Horror.” In it, the paper recounts the mien of the inmates during their last moments: “They laughed sang, and shouted, while some sat stupefied and gazed with melancholy pleasure upon the appearing flames.”

But 1893 was a long time ago, and horror cools as quickly as a fire in a snowstorm. An event like this would normally only be recalled by the dustiest of local historians, were not the local people of Strafford County saddened and shocked enough to memorialize it with something more permanent than human memory.

Today, in 2020, the fact that an urn-topped column still stands on a small hill behind a nursing home on County Farm Road in Dover is an oddity if anything on the planet is.