This isn't sweet apple juice - good hard cider can be just as varied as wine. 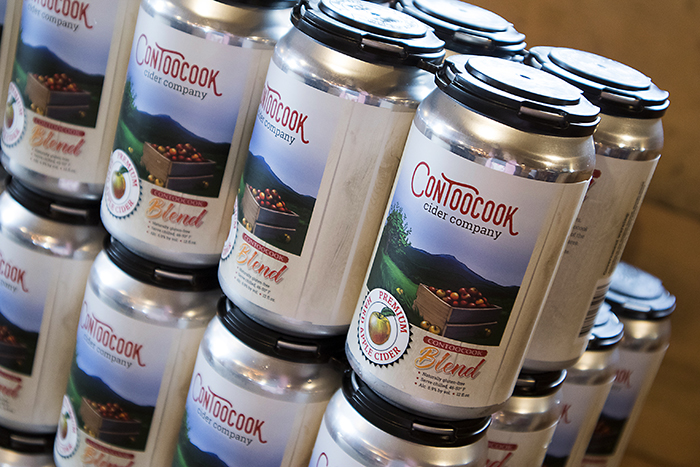 It’s not easy running a farm these days — even a fruit farm.

Eight years ago, when Tim Bassett, now 48, decided to change careers from marketing to working farmer, he knew right off he didn’t want to deal with livestock, vets, feed and manure. How difficult could it be to grow apples?

Tim and his wife Amy purchased Gould Hill Farm in 2011 after leasing it for a year. The property lies on a hillside in a gorgeous, Currier-and-Ives area of the state with rolling hills and expansive views, including Mt. Kearsarge and Mt. Chocorua. With the acreage came a large storage barn and a rambling 1900s house with a post-and-beam barn. It’s a pretty enough area to live and raise kids in, but can one make a living?

New Hampshire has a long history of apple orchards and Gould Hill was one of the first, established in mid-1700s. Bassett explains that, early on, the hills were co-opted for orchards, as cool air runs down, leaving it a bit warmer on top — those few degrees can make a big difference for budding blooms in May. Amazingly, this property has been active all along and has only changed caretakers twice, once in 1938 and most recently to the Bassetts.

The Gould Hill Farm orchards are planted with 80 varieties of apples, meaning cider maker Dale Jancic has plenty of material for creating unique styles of cider.

Apples remain the state’s largest fruit crop, but active acreage keeps dropping — most likely sold for developments with street names like McIntosh Lane. For example, here, the Bassetts were only able to purchase a slice of the original property. In the past few years, tracts of Gould Hill were sold off for homes, including a former governor’s hilltop retreat, and acres of prime land were held back and allowed to go fallow.

Numbers from the USDA show that, even though apple farms have steadily lost 500 acres since 2013, bushels per acre went up. Well, in some years. Unfortunately, weather and market conditions make the value of a bushel of apples vary wildly, from $18 in 2013 to $47 in 2016 and $14 in 2017. Bassett knew these numbers and understood early in the game that wholesaling apples would not pay the bills.

Many orchard owners market directly to the consumer with pick-your-own options. It’s a brilliant scheme to get young families to do the labor, in the guise of an adventure, while still paying retail. Then there are the stacks of apple pies, apple butter and, of course, the main incentive to go to an apple orchard, the ubiquitous cider donut.

But maybe, just maybe, the juice is in the juice. Cider is the most lucrative way to sell an apple, as the fruit doesn’t have to be pretty or fresh. And, in some cases, the bottle is the last profitable option for the dropped apples that often surround each tree at harvest time. “Apples often taste best a few days after they are picked anyway,” says Bassett. “Their flavor is more developed.”

At harvest time all around the state, apples are turned into fresh, sweet cider by the crateful. The methods are age-old. The apples are washed, crushed and then squeezed. At Gould Hill, the squeezing is done in a long apparatus that looks like an accordion. The apple pulp is filtered through mesh bags in the folds while pressure is applied. From there, the juice is bottled for fresh cider or diverted to tanks to ferment for 10 days to three weeks, yielding hard cider. For Bassett, the hope is that the current rage for craft brews — and the adjacent hard cider — will help pay the mortgage. 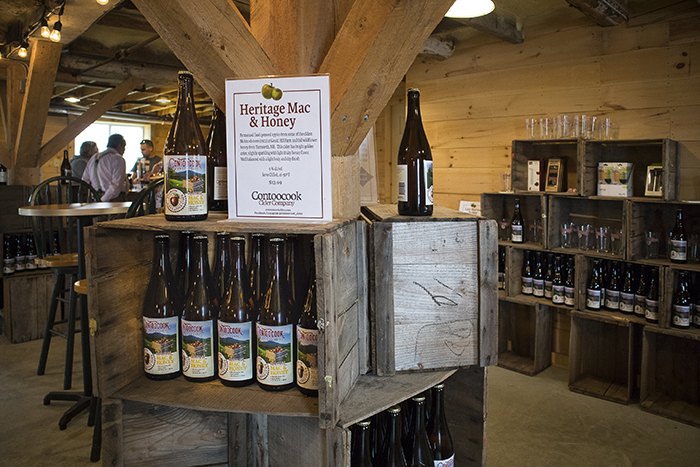 Bassett and his cider maker Dale Jancic have been making and marketing hard cider for about two years under the brand of Contoocook Cider Company from Gould Hill Farm. It’s been a smash hit with tasters, but getting it distributed remains a problem. “When I call on stores they say ‘Go away,’” says Bassett. Apparently, there is no room in the inn with more than 90 local breweries, meaderies and cideries vying for shelf space. A few restaurants, including The Everyday Café in Contoocook, the Lakehouse Tavern in Hopkinton and, most recently, The Foundry in Manchester have Contoocook Cider on tap.

Another hurdle is the concept of hard cider. Many people aren’t familiar with what it can be. With 80 varieties of apples grown in the orchard, Jancic can mix and match to develop a variety of flavor profiles. Bassett says that, even while the juice is being made, Jancic will say add more Russet or Baldwin or Winesap apples to the mix and let’s re-test. Recipes as a guide can only go so far. The same variety of apples can offer a different brix (sweetness indicator) level on any given day. That can be good news. Cider can be as varied as wine varietals. Plus, it’s not that cloying, sickly, apple-y juice anymore.

Good cider makers — such as North Country Hard Cider in Rollinsford and now Contoocook Cider — play with sugar levels, yeast strains and apple varieties to develop a full spectrum of flavor and sweetness ranging from dry to semi-sweet to sweet. There is often a light effervescence, adding a few bubbles on the tongue. Some varieties are bottle-conditioned for a true sparkling cider, plus it’s always gluten-free. With no official rules to cider-making, flavor can be added with cranberries or blueberries or a bit of heat from peppers. Also, sugars can be added to fit a profile. Bassett has used his own maple syrup in a recent, probably not to be duplicated, version. Small producers have a limited volume on hand and each cider-making session delves into uncharted territory, never to be tread again. The lesson is, if you like it, buy it. Or next time you see one on tap, ask for a taste. You’ll be pleasantly surprised. 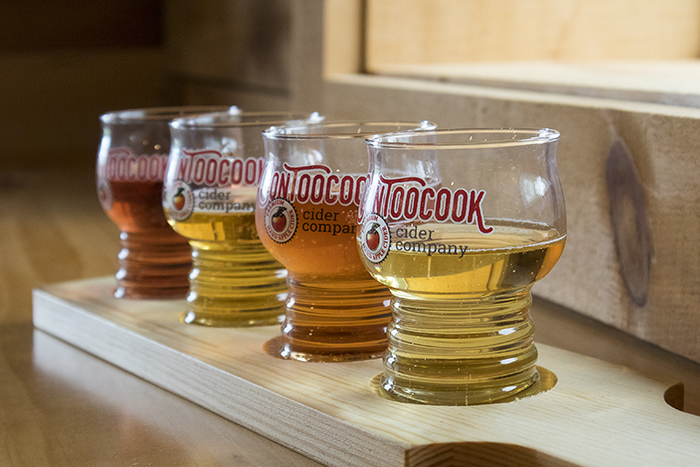 Bassett has about 20 to 30 acres of apples under cultivation with Golden Russet apples being the “Triple Threat.” He says they make a great base for hard cider, sweet cider and are good to eat. To make the best use of the acreage, a compact variety is often grafted onto a trusted root stock and trained to a wire trellis system for high-density output. Winesaps, Hudson Golden Gems and Yellow Newtown Pippins are a few of the heirloom varieties that are pressed into service for hard cider.

At Gould Hill’s tasting room in the lower level of the 1810 post-and-beam barn, find about six to 10 varieties on tap. Bottles are available in 750 ml size or they can fill a growler. At the moment, only one variety, Contoocook Blend, is available in four-pack cans. Bassett had already invested in fermentation tanks, conditioning tanks and a new style of keg. A mobile canning service came out to can what was available. Like any new business, the farm and its relentless needs can be a money pit. Fortunately, it was a good year for apples. I say just can it. Can it all and drink it cold. 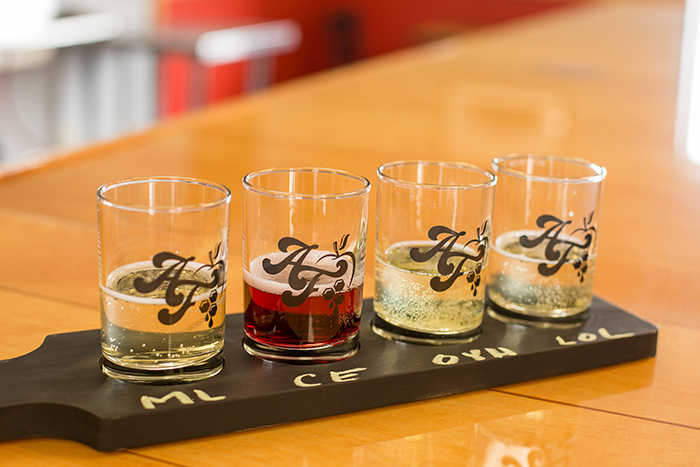 A limited menu is offered along with cider or mead. They offer an educational tour on Saturdays that describes both the cider- and mead-making processes. Order a pint or try several with a flight.

Visit the tasting room to try a flight of the nine ciders they have on tap. Small snacks are available, but you are welcome to bring along your own food. North Country ciders can also be found on tap and in stores at a number of locations in New Hampshire and neighboring states. See the website for a map of locations.

Most of the apples grown at Poverty Lane are destined to be made into their signature dry ciders. The bottles are available in New Hampshire Liquor & Wine Outlets and other stores, but you can also visit on growler days for samples and growler fills. During the fall months, when the orchard is open most days, growler days occur every day but Thursday. For all other months, they happen every other Thursday from 12-6 p.m. in the cider room. Visit their website or on Facebook for exact dates and hours.
See www.nhmagazine.com/beer for more local cider (plus other locally made beverages).

Find even more local cider (plus beer) with this map.