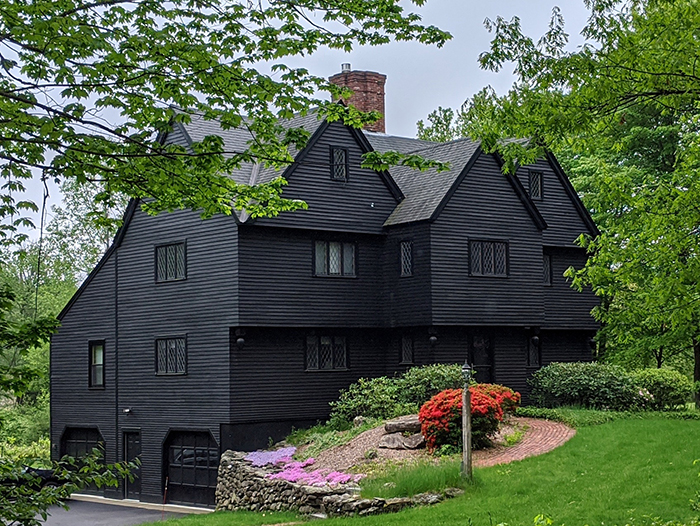 We’re only in our fifth week of this column, and readers have already introduced me to an entire slate of weird New Hampshire wonders that I’ve never heard of in all my travels across this ragged triangle of a state. I’m talking witch graves, inception bridges, violent epitaphs, religious boulders. Keep ’em coming. I’ll visit them, and then I’ll share them here with everyone as we map out what really makes this state unique.

It’s the most iconic building in Salem, Massachusetts, mainly because it’s the only physical structure left that is directly connected to the Salem witch trials in the city. Also because it’s black and pointy and ominous looking. They call it, of course, The Witch House.

[Editor’s Note: Uh, J.W., this is a New Hampshire publication.]

It was the home of Jonathan Corwin, one of the moustache-twirling judges of the trials, who was tagged in after Judge Nathaniel Saltonstall resigned in disgust after the execution of the first victim, Bridget Bishop. Corwin bought the house in 1675 and was living there 17 years later when he helped insert innocent necks into nooses.

[Editor’s Note: Seriously, this needs to be about a New Hampshire site.]

But why am I talking about a Massachusetts house in a New Hampshire magazine? Because we have a replica of the Witch House here in the Granite State.

You can find it in Hollis, at 197 Wheeler Rd. The house is a private one, not technically an attraction, but it is certainly eye-catching. Built in 1978, it came to my attention in 2017 when it went on the market for $650,000. Nobody bought it at that time, but I certainly came within a witch’s broom bristle of starting a GoFundMe so that I could call it home. Although its front exterior is faithful to the original, the house is larger than its Salem model and it has all the modern amenities, including an eight-person hot tub. That’s where Judge Corwin would have unwound after a tiring day of listening to children talk to invisible servants of Satan.

Strangely, it’s not the only replica Witch House in the country. There’s also one in Sandwich, Massachusetts, and another in Huntsville, Alabama. But, you know, I don’t talk about non-New Hampshire sites here.