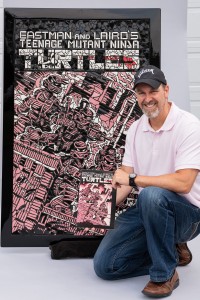 Matthew DiMasi, holding a copy of the first “Teenage Mutant Ninja Turtles” comic, appears with his latest mosaic based on its famous cover. Photo by Morgan Karanasios

It was 36 years ago that a couple of young guys in Dover decided to create a comic book that was so ridiculous that no one would ever consider publishing it. Indeed, they had to borrow money from an uncle to generate the first run of 3,000 issues of “Teenage Mutant Ninja Turtles No. 1,” and somewhat to their surprise, they all sold out and two more printings took place. Anyone who bought one of that first batch should start digging through the attic — they now sell for more than $30,000 each. Dunbarton radiologist and comic collector Matthew DiMasi had been handmaking mosaic renderings of his favorite comic covers for six years, selling them for high-figures to fans, when the “TMNT” cover caught his eye. The low-res look of that two-color cover lent itself perfectly to his medium, so he got busy. Now his rendition appears on yet another 3,000 run of a special printing of the comic book in honor of the 36th anniversary of the original. Meanwhile, DiMasi has been tapped by Marvel to create a mosaic “variant” cover of their rebooted “Spider-Man No. 1” for its 30th anniversary.