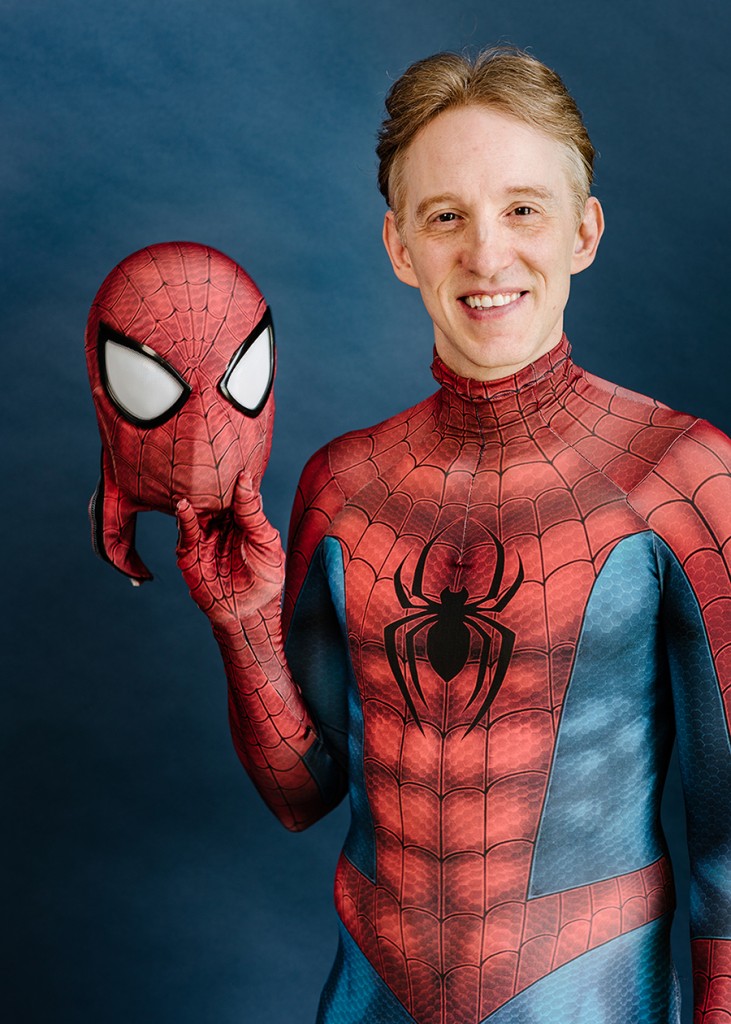 The Cosplay Hero Initiative (formerly Cosplayers for a Cause) is a group of local fans who like to dress up as their favorite comic book characters and liven up events where they are invited to appear. They describe themselves thusly: “We are a group of cosplayers dedicated to making the community a better place. We have decided to use our hobby as a way to provide happiness and assistance to those in need.”

CB: I was involved early on, back when they were still Cosplayers for a Cause. The whole organization has been around about five years, and I’ve been there pretty much the whole time. There are admins who run things, but I just enjoy playing characters for charities.

CB: I’m an actor who does voice-over work and some on camera stuff. I live in Amherst. I’m represented by NEMG.

CB: I’m a comic book fan since reading as a teenager, and Spider-Man was always one of my favorites. Also, I’m lucky to have the physique. I’ve seen a lot of others who tried it who just don’t have the build. When I was young I was always a nerd. I was a nerd in the ’80s when it wasn’t cool to be a nerd. I was playing Dungeons & Dragons and I still am. I play Magic: The Gathering, and read a bunch of science fiction and fantasy. I’m into the large majority of nerdy tropes. So the fact that Peter Parker [Spider-Man’s alter ego] was a nerd was something I could relate to.

RB: Any challenges to being Spider-Man?

CB: Yeah, getting into the suit, first of all. I heard someone describe it as doing a strange interpretive dance. It is extremely tight and it’s tailored to my body exactly. If you know what you’re doing — and it’s terrible if you don’t — when you wear Spandex, and you’re a guy, you have to wear the proper undergarments. If you don’t, you can see certain parts of the anatomy through the Spandex. A lot of people don’t know that and it’s terrible to look at when it happens. I’ve spent hundreds of dollars on dance belts – what dancers wear to preserve their dignity when wearing tights. It‘s very uncomfortable, especially if I’m doing six hours at a children’s event.

RB: Six hours? That is about the limit?

CB: People who do “Star Wars” characters with all the armor, they can do a couple of hours before they need a break. As Spider-Man I can do five or six hours and then I have to get out of the costume. Regarding challenges, sometimes you get kids who are punks.

CB: Kids telling me I’m too fat to be Spider-Man or pulling on my costume, saying “Are you real, is this real?” This is a thousand-dollar costume. I’ve had to tell kids to stop pulling on it. I try to say please, even though I’m angry. Sometimes there are parents right there.

CB: Yes, I’ve always loved kids, always loved comic books. Dressing up as Spider-Man lets me do a little bit of acting, lets me pretend to be a superhero and makes all these kids very happy. That’s why I do it.

RB: There are so many versions of Spider-Man now. How did you come up with your look?

CB: Yeah there’s a variety to choose from, not only from the comics but the different movie lines. Since I grew up with the comics I decided to go with the classic. I don’t really like the movie styles that much. Ditko, McFarland, all the comic artists had different takes on it but they are largely the same. The biggest difference is they change how large the eyes are. My first costume has much bigger eyes and I didn’t think they looked so good in real life so I got basically the same eyes that were in the “Amazing Spider Man 2” [the movie]. So I use the classic comic book costume with the eyes from the “Amazing Spider Man 2.”

RB: Have you played other characters?

CB: The first one I developed was The Flash from DC Comics. I actually got onto the cover of the Concord Monitor in a photo when I was at a convention, but they didn’t say I was The Flash, they said I was Flash Gordon. Spider-Man has been pretty much my go-to for five years.

RB: How has the improved status of nerds affected you?

CB: First of all, I’m very excited about that, since I was a nerd and was picked on at school incessantly. Now being a nerd is hugely mainstream and there may be other factors but I believe it is largely because of the Marvel Cinematic Universe. Over time the Marvel movies become more and more popular and people started to go to the conventions. Now you get all these celebrities who come out of the woodwork and say, “Oh yeah, I love comics.”  Even people who are not typical nerds, like Joe Manganiello, who is this big, muscular, handsome guy is all into Dungeons and Dragons, but I really think it started with the movies. That was the catalyst. I can’t be happier because all this stuff is more popular now than it ever has been. It’s popular to be a nerd.

ChristopherBuckner.com has bunch of information on where to find Chris and on nerdish topics of interest. Check out the Cosplay Hero Initiative at their Facebook page.