The written word and silver screen

Topics from the books about Mt. Washington range from children's literature to expert hiking guides

“Cat in the Clouds” 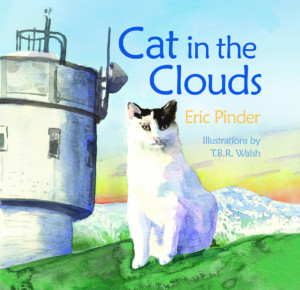 Eric Pinder, who worked at the Mount Washington Observatory, chronicled the journey of the feline mascot who preceded Marty. Follow stray cat, Nin, as he drifts from home to home until he meets a meteorologist named Mark. Nin then begins his greatest journey up Mt. Washington where he learns that the best friends can be found anywhere, even high above the clouds.

“Not Without Peril: 150 Years of Misadventure on the Presidential Range” by Nicholas S. Howe profiles people who found trouble on New Hampshire’s Presidential Range, from the 19th century through the present day. The result is a compelling story about our changing relationship with the mountains we love and the risks they pose.

In “The Mount Washington Cog Railway,” local historian Bruce Heald ties the history of the Cog Railway’s construction with the grand romance of the goldenage of rail as they converge at the top of Mt. Washington. 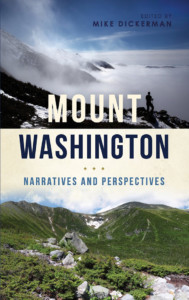 Twenty previously written pieces cover every aspect of the mountain’s storied past in this unique volume of work, edited by Mike Dickerman. Follow the history of the nation’s first mountain-climbing train and witness Mt. Washington’s tales of human tragedies.

Writer Henry David Thoreau visited the Mt. Washington during the pre-Civil War White Mountains tourism boom. Drawn as other artists and writers were by the transcendent landscape, he climbed the mountain in 1839. Though by then there were other ways up, he preferred to hike, and seemingly didn’t agree with turning the summit into a tourist attraction complete with hotels, writing years later, “I think that the top of Mt. Washington should not be private property; it should be left unappropriated for modesty and reverence’s sake, or if only to suggest that earth has higher uses than we put her to.” It just goes to show arguments over balancing tourism with preserving natural spaces are nothing new.

Life at the Top

In “Life at the Top: Weather, Wisdom & High Cuisine from the Mount Washington Observatory,” former observer Eric Pinder describes the joys and terrors of living in the clouds and explains Mt. Washington’s geology and weather. The book concludes with a one-of-a-kind cookbook, “Recipes from the Rockpile.”

In 1846, Lucy Crawford published “History of the White Mountains.” Crawford was the wife of Ethan Crawford who, along with his father Abel, built the first footpath to the summit of Mount Washington. Her book was the first to be published about the region.

Randi Minetor describes the circumstances behind the tragic tales of those who have lost their lives on the mountain. With “Death on Mount Washington,” learn from the mistakes that others have made from the comfort of your own home, and remember to respect Mt. Washington on your next trip. 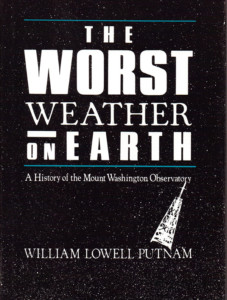 In “The Worst Weather on Earth” by William Lowell Putnam, read a history of the state’s famous weather observatory atop Mt. Washington.

In 1859, Thomas Starr King published “The White Hills: Their Legends, Landscape and Poetry.” Part hiking guide, part White Mountains marketing book, it was one of the first books to speak at length about the many natural wonders of the area. After his trip to the region in 1850, he wrote to a friend, “Mt. Washington and the gullies, the Old Man of the Mountains, and Echo Lake, the Flume! O Randolph, shall we ever have another such walk as that? I fear not this side of Jordan. There must be grand mountain scenery in Heaven … In my musings it seems as if North Conway might be entrance to Paradise.” 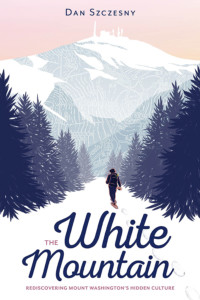 In “The White Mountain,” journalist Dan Szczesny explores the history and mystique of Mt. Washington. Read about how this rugged landscape has reflected back a timeless history of our obsession and passion for exploration and discovery. From Hobblebush Books, $25. Learn more at danszczesny.com or hobblebush.com.

“The White Mountain Guide” is AMC’s comprehensive guide to hiking trails in the White Mountain National Forest. Hikers have relied on this book for over two centuries. With expert advice, trail coverage, trip planning, safety information and even a checklist of New England’s 4,000-footers, this guidebook is the perfect companion for planning a hike. 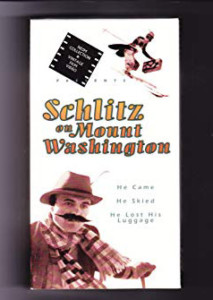 Mount Washington on the Silver Screen

Our mountainous geological lodestar has had only a few starring roles in cinema, and in the most illustrious example, it serves essentially as a “stunt double” for a somewhat more famous peak. Peter Crane, who curates the Memorial Library on the mountain, says storm scenes from the IMax documentary “Everest” were filmed on Mt. Washington. “My impression is that, after that terrible spring on Everest, the filmmakers got back and realized that, to tell their story, they needed a few visuals that they did not capture when they were in Nepal.” At the slightly more ridiculous end of the movie spectrum is “Schlitz on Mount Washington.” Lowell Thomas narrates this 22-minute film about a White Mountains tourist who ignores warnings about bad weather, pushes himself up the mountain, and soon finds himself lost in the White Mountain snow. The black-and-white film from 1935 has a certain cult status at Dartmouth College, where it’s shown to new students at the college’s Moosilauke Ravine Lodge complete with “The Rocky Horror Picture Show”-esque callbacks hollered out by members of the lodge “croo.”