How to Use Less Plastic in Your Everyday Life 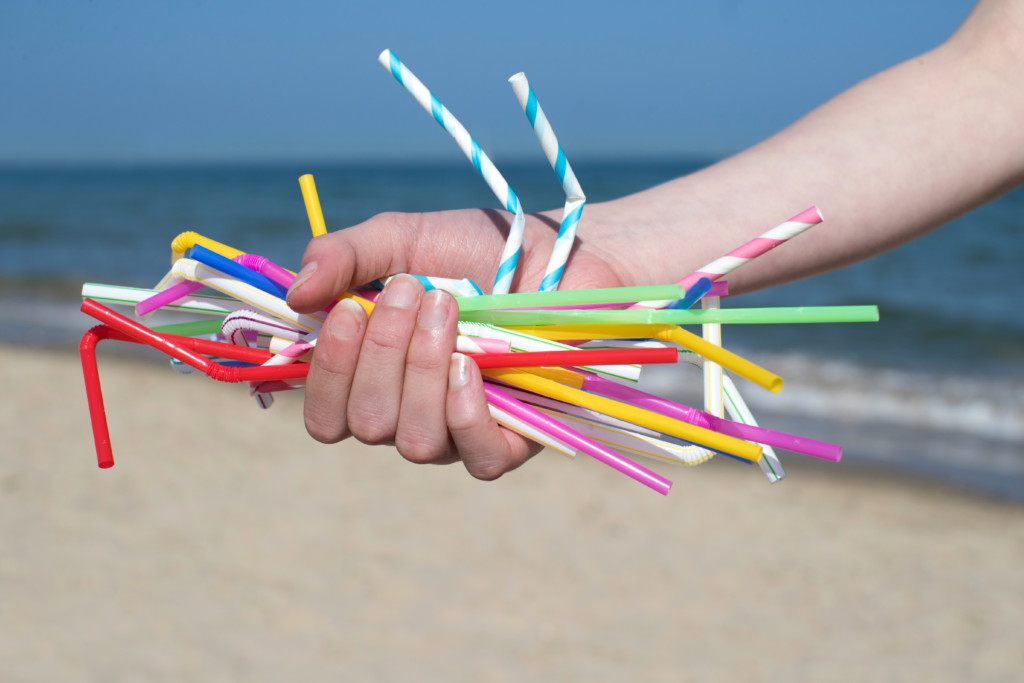 In August 2015, marine biologist Christine Figgener filmed her team removing a plastic straw from a turtle’s nose. It’s been four years, and the viral video still resonates with people around the world, partly inspiring a larger movement to eliminate plastic straws from our day-to-day lives. There has been a wave of corporate plastic straw bans and increased public awareness of the impact that single-use plastics (like straws) can have on the environment.

While choosing paper or reusable metal helps cut down on the 500 million plastic straws we use a day, plastic pollution is bigger than opting not to use a straw with your morning iced coffee. The goal is to use the plastic straw discussion as a first step to start tackling the plastic pollution problem in a sustainable way. We spoke with Dr. Gabriela Bradt, fisheries state specialist at the UNH Cooperative Extension and N.H. Sea Grant, and asked her about the environmental impact of using plastics, curbing plastic habits, and tips on where to begin when creating a plastic-free home. Her first suggestion — do your research and be more plastic conscious.

Education
If you walk down Hampton Beach in the summer, you might find plastic cups, rope, bottle caps or plastic bags. More alarming than the amount of debris on our beaches is the lack of education surrounding the impact of plastics on our environment.

“We are dealing with a massive plastic addiction in our society,” says Bradt, which is fueled by the desire for convenience and a throwaway mentality.

Though general public opinion is anti- straw and -plastic bag, Bradt says there’s still pushback. “When you say, ‘no more plastic bags or straws,’ people respond with ‘don’t tell me what to do’ instead of thinking about the global reason as to why we are banning them in the first place,” she says.

4Ocean
4ocean.com
Each product purchased removes trash from the ocean and coastlines one pound at a time.

Save the Seals River Cruise in Rye, September 28
seacoastsciencecenter.org

Still, this is a step in the right direction. But, says Bradt, it’s one relatively tiny step of many. The real culprits are in plain sight right in your own home, as that plastic you chuck in your recycling bin might not end up where you think.

A big part of curbing plastic habits and getting out of “convenience mode” is understanding plastic pollution. “Once your trash can is emptied, it’s out of sight, out of mind,” says Bradt. “You aren’t necessarily aware that it could likely be making its way into the environment or the ocean.” And that’s the real problem, she says.

“One of the biggest environmental challenges that we are facing is marine plastic debris,” says Bradt. “Plastic degrades, but it isn’t biodegradable. Most plastics are photodegradable, which means it breaks up into smaller and smaller pieces when exposed to sunlight instead of decomposing completely.”

Plastic debris that is less than five millimeters long is called “microplastic.” Microplastics are now being recognized as a major threat to wildlife and human health.

“Both are bad because, at that size, they are accessible to all marine life — everything from a tiny crustacean to blue whales will come along and eat them,” she explains. This creates plastic build-up in their stomachs, which can lead to emaciation or death.

When plastics break down, they also leach out damaging chemicals that can affect not only wildlife, but humans as well.

“Plastics are made to be strong and durable, so when they break down, chemicals like PCBs, BPA and PFOAs leach out into the environment and ocean,” says Bradt.

These chemicals have been shown to mess with human hormones and interfere with the delicate systems that keep our bodies in homeostasis.

“People don’t realize that it isn’t just plastic straws that are affecting our environment, it is plastic as a whole,” says Bradt. “The negative impacts are everywhere, from our oceans to wildlife to the food that we eat and even the air that we breathe. Once we understand that, we can focus on starting with cutting the flow of single-use plastics and demanding the use of other alternatives.”

Start Small
It can be overwhelming when you take a step back and look at the amount of plastic that you use, but it doesn’t have to be.

“It’s too hard to change everything at once,” says Bradt. “Make your end goal to be as plastic-free as possible, and then take baby steps to work up to that goal.” Bradt recommends tackling the hardest part first: your kitchen. “Most of our food comes in plastic because it is the cheapest for packaging, buying and storage,” notes Bradt.

“Skip buying prepackaged food and opt for buying in bulk. If you like almonds, go to a dispenser and fill up an old glass sauce jar for the week.” Look around your kitchen and see what plastics you can switch out for jars that you can save and reuse.

Another tip? Skip the plastic bags. A single plastic bag can take up to 1,000 years to degrade, so buy the reusable bags and leave them in your car. Instead of buying packaged fruit, buy your items piecemeal when you can, and utilize local farmers markets.

“I always tell people in New England to eat with the seasons,” says Bradt. Plus, there’s the added bonus of supporting local farmers and businesses, she adds.

When you’re done with your food items, don’t forget to compost. “By minimizing your waste in general, you end up using less garbage bags and have less trash to take out every week,” says Bradt.

Think Outside the Box — Literally
Once you get through your kitchen, start thinking beyond replacing the plastic box of lettuce in your fridge.

“Most kids’ products, like plates, cups, lunchboxes and silverware, are made of plastic,” says Bradt. “I like to make my own snacks in Mason jars instead of individual snacks in plastic wrapping, and I will also make my own silverware kits for the week from our silverware at home and we have many metal water bottles for them.” When you are wrapping up lunches or dinner, use beeswax or soy wrapping strips instead of plastic wrap.

When it comes to other household products, Bradt suggests you buy boxes instead of bottles. Products like laundry detergent come in cardboard, which is more easily recycled than plastic. Do your best to also go with refills instead of buying new products, and look for ways to fill up the old bottle again. You can also use bar soaps instead of pump soaps, bamboo toothbrushes instead of plastic and reusable razors instead of disposables.

When it comes to using less plastic and reducing your plastic footprint, Bradt says it’s important to remember that your efforts don’t end with cutting out plastic straws from your daily routine. It’s about trading convenience for sustainability, and putting some thought behind what you are buying and consuming.

Bradt also has ways to reduce plastic while you’re on the go. Make yourself a kit that you can leave in your car that has a reusable coffee mug, water bottle, silverware, metal straw, and reusable bag — that way, if you need to use a drive-through, you can ask them to fill your containers instead of using their products.

Choosing reusable bags instead of plastic might seem like a small change in the grand scheme of our plastic epidemic, but you can’t make a change without starting somewhere.