Playing With Your Food

Critics of the food scene tend to be a somber bunch, looking for poor pairings, spotty spoons and other culinary crimes. Meanwhile, average diners just want to throw their appetites a party. Here's where you can have your fun and eat it too. 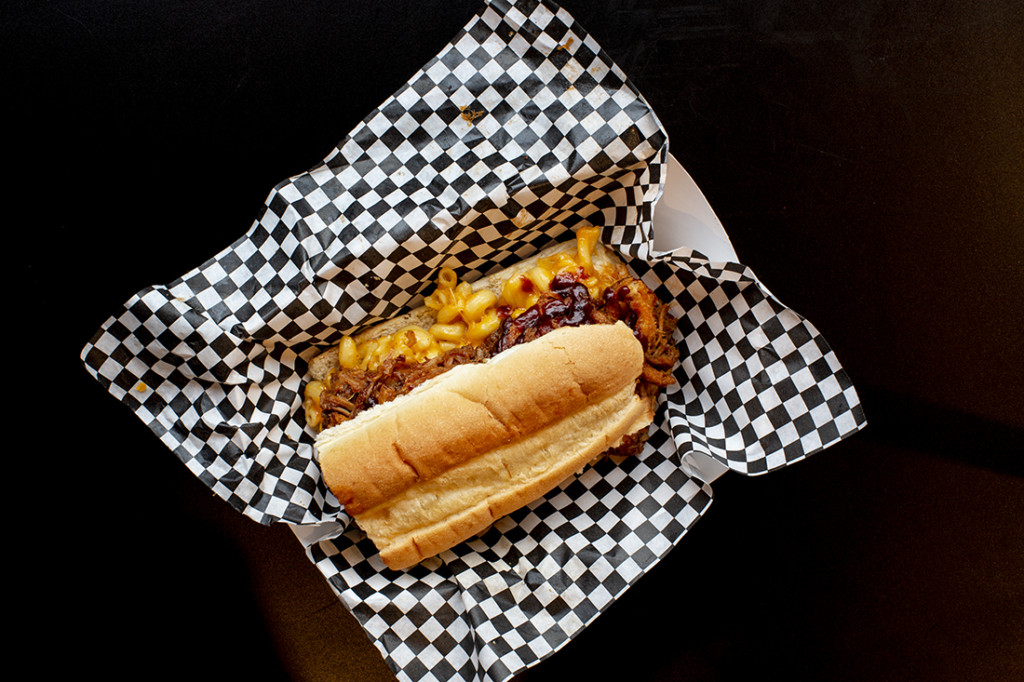 When your carb craving is so big you need carbs on carbs, head to the Sandwich Master, where owner Earl Marshall will whip up a sandwich complete with mac and cheese (among many other options). Photo by Lori Pedrick

Enduring as this dictum may be, it’s a little misleading. As long as he tossed in some water now and then, man theoretically could live on a bread-only diet. Pound back a slice of sourdough every few hours, and you’re probably going to generate enough energy to keep from keeling over — which, technically speaking, is the only reason why we humans snarf down meals every day of our lives.

But where’s the fun in that?

Our daily bread becomes a whole lot more interesting when we push beyond what’s required and ask, “What if?” or “Why not?” And, in the Granite State, there’s no shortage of restaurateurs who put those questions at the center of their menus. Within our borders lie diners that measure poutine by the pound, takeout joints that roll sushi rice into two-handed street food, and eateries that transform the simple sandwich into a Frankenstein’s monster of ingredients and cuisines.

New Hampshire’s most adventurous dishes sometimes trade in the over-the-top, but fun food need not be extreme to be satisfying. The five restaurants featured here represent the state’s most enjoyable eating because they surprise us, delight us, and present us with food that’s far more than a means to an end. Man could live by bread alone. But why would you want to? 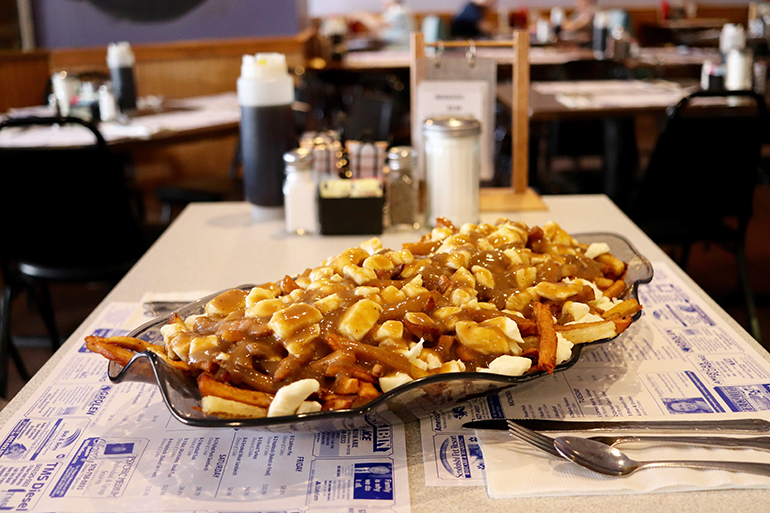 Can you handle the poutine challenge at Manchester’s Chez Vachon? Photo by Emily Hedit

As we begin, allow us to offer a brief PSA.

Moderation is great. It’s good for you. And, should you be inclined toward control, there are plenty of places in New Hampshire where you can eat experimentally and inventively without caving in to the temptations of excess.

But sometimes, you just want to eat as much of something as you possibly can.

Manchester institution Chez Vachon gives hardy eaters just that chance. The eatery’s entire menu hinges on the cuisine of our French Canadian neighbors to the north, but their Grand Poutine Challenge takes Quebec’s most famous dish to all-American new heights. The artery-clogging challenge invites visitors to down two and a half pounds of French fries, a pound of cheese curds, and six ladlefuls of gravy in 60 minutes. Those who succeed earn a spot on the restaurant’s wall of conquerors; those who fail, a spot among the forfeiters. We’ll give you one guess which side of the wall is more crowded.

Though many restaurants have created extreme-eating challenges in this post-”Man v. Food” era, Chez Vachon’s earns a mention for its unique New Hampshire-ness. With more than three decades serving the Manchester community — and a spate of visiting politicians that, most recently, included Democratic hopeful Cory Booker — the diner is as much a part of the city as the Merrimack River.

Their signature dish is too. As much as 40% of Manchester’s population has been estimated through the years to have Quebecois ancestry, making five pounds of poutine the local ethnography buff’s eating challenge of choice. 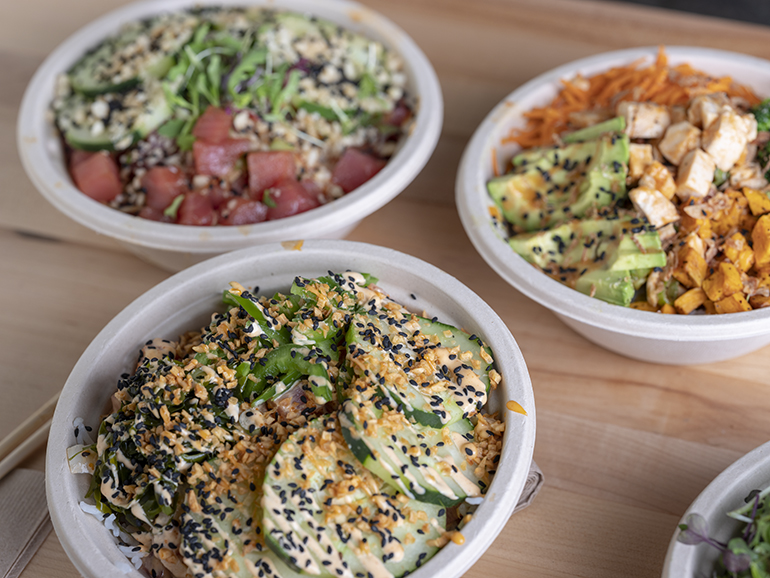 Go nuts while keeping it healthy by building your own poké. Photo by Jared Charney

Fun food may seem synonymous with diet-busting indulgences, but healthy food (yes, really!) can be fun too. A growing chain of restaurants on the Seacoast proves it.

Ohana Kitchen first opened its doors in Portsmouth in December 2017, and last year, they added a second location in Exeter. A Newburyport outpost joined the family in October, bringing the gospel of good clean fun across state lines.

Though their core menu item — Hawaiian-style poké — is exceptional enough in New Hampshire by virtue of rarity alone, the Ohana restaurants have distinguished themselves by not just introducing Granite Staters to the dish but letting them have fun with it.

The eateries’ “no limits” menu encourages diners to build their own meal. Onto a base of either traditional poké bowl or Instagram-ready sushi burrito, customers can add their choice of protein and mix-ins from a list 40+ items strong, creating dishes as unique as the clientele. Ahi tuna and tofu with edamame and microgreens? You’ve got it. Local chicken with broccoli and sweet potato? That works too.

With a cuisine that brings the tropics to New England and a DIY mentality that lets you go wild without going off the wagon, Ohana shows that fun is fit for any diet. 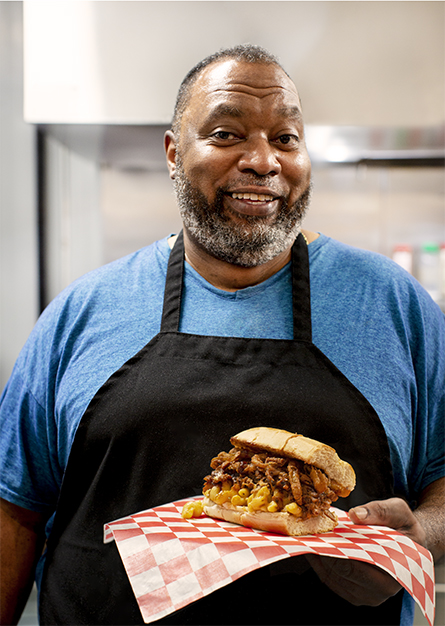 Ahh, sandwiches. From PB&J to ham and cheese, these humble handhelds have gotten more than a few of us through bouts of must-eat-anything hunger pangs. But that kind of survival eating is nowhere to be found at Rindge’s Sandwich Master.

The eatery’s “Sandwiches Gone Mad” menu has attracted attention from venues as prominent as USA Today over the years, and, in looking over the offerings, it’s easy to see why. From “The Dumpster” to the “Grilled Cheese Crazy,” the 31-item menu features nearly every wacky sandwich accoutrement you can think of.

Three deep-fried appetizers shoved onto a bun. Buns replaced with whole grilled cheese sandwiches. Noodly carbs stuffed into bready ones. Fast-food chains may get the credit for ideas like a fried-chicken bun, but, with 16 years in business, the Master’s been doing crazy sandwiches longer — and, in his opinion, better, too.

“A lot of people try to imitate us,” says owner (and titular maestro) Earl Marshall. “But they don’t put in the extra effort that we do.”

Even fried fillings like mozzarella sticks are made in-house at Sandwich Master, putting the restaurant a cut above competitors who use towering size as an excuse to skimp on quality. The self-taught chef suspects that his customers keep coming back — often from out of town or out of state — because they know that his creations marry the wild with the delicious.

In that way, the gone-mad sandwiches aren’t so dissimilar from Pickity Place, the dining institution in nearby Mason that offers visitors another of our favorite fun-food options (see below). The proximity of these two eateries, Marshall says, makes this corner of the state something of a culinary Kissimmee.

“It’s like going to Orlando,” he says. “You have Universal Studios and you have Walt Disney. People want to see both.”

Just maybe not on the same day. 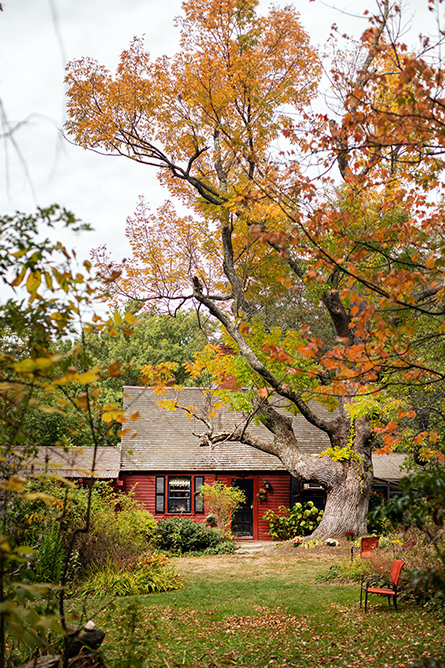 It really does feel like you’ve stepped into a storybook when arriving at Pickity Place. Visiting the grounds, gift shop and greenhouse are all a part of the magic. Photo by Jenn Bakos

Longtime readers of this magazine may be familiar with the origins of Mason’s Pickity Place, but for those who aren’t, gather ’round: It’s time for a story.

Once upon a time in 1786, settlers of a young nation called America built a small, red cottage atop a hill in southern New Hampshire. As centuries came and went and modernity encroached, the cabin retained its charm — and, in 1948, it entered literary history as the inspiration for the cabin seen in a famous printing of the fairy tale “Little Red Riding Hood.” Some three decades after that, the house became home to a restaurant.

Who wouldn’t want to eat in a setting like that?

By virtue of location and mystique, Pickity Place would have some appeal even if they served up cold pizza day and night. But fortunately for us all, they don’t.

Pickity specializes in, essentially, a homegrown alternative to a British high tea. At three (and only three) seatings per day, the restaurant offers a five-course luncheon accompanied by various teas and peppered with herbs and edible flowers grown in the on-site gardens. Menus change once a month and can be swapped for theme-appropriate “grandmother’s baskets” for visitors under 12.

In a world with no shortage of ways to eat mindlessly for the pure sake of fueling a day’s work, the best meals force us out of our routines. To have fun with food is to embrace it — to savor each bite that you’re given and to revel in an experience that goes beyond dining to foster connection, to our communities and to those we dine with. To find that in our corner of the globe, look no further than a little red cabin at the top of an enchanting little hill. 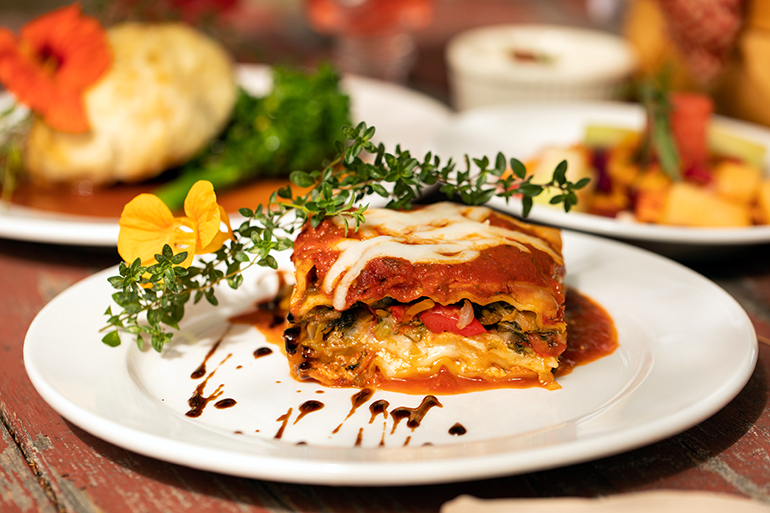 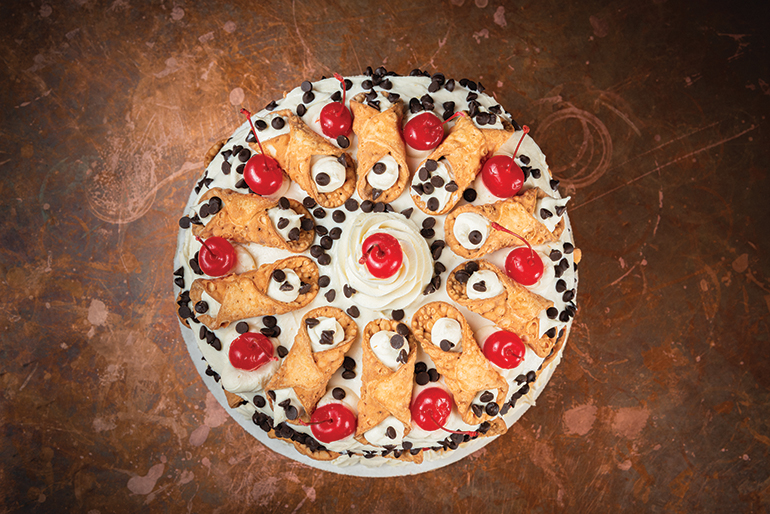 “It’s not your average cake,” says Vito Marcello of his namesake restaurant’s most famous dessert.

In feasting your eyes on Marcello’s cannoli cake, it’s clear that “not average” is an understatement.

The $85 concoction begins its life as a standard vanilla cake, but the toppings — golf-ball-sized swirls of frosting made from cannoli cream, rows of pastries dotting the top and the sides — blast this menu favorite into the sugar stratosphere.

Vito Marcello’s has earned a following over the years, the chef-owner says, not just because they serve a popular cuisine at a high level, but because they’re unafraid to experiment with dishes that a diner may not have seen at her favorite Italian restaurant back in Boston or New York. 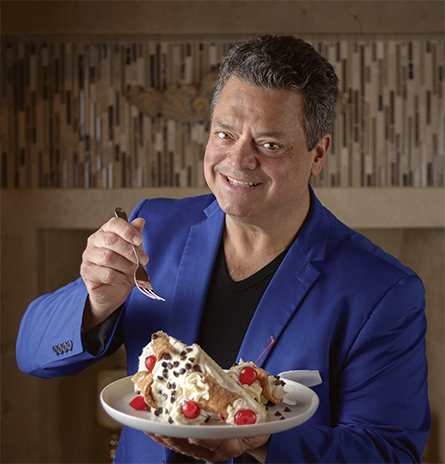 “I want the wow factor,” he says. And the cannoli cake is perhaps the biggest wow of them all.Marcello readily admits that the creation isn’t the kind of authentic Italian eating that dominates his menu, but for a dish like this, authenticity comes in other ways. This cake is authentic to the two simple rules that Marcello’s second-generation Italian-American father taught him in the kitchen.

“First, don’t serve anything that you wouldn’t eat yourself,” the chef recalls. “And second, if you can’t do it right, don’t do it at all.”

The self-proclaimed cannoli lover says the cake meets both of those guidelines — and, along the way, it earns a fair share of oohs and aahs too.

If that’s not having fun with your food, we don’t know what is.