Directions the Yankee way — with landmarks 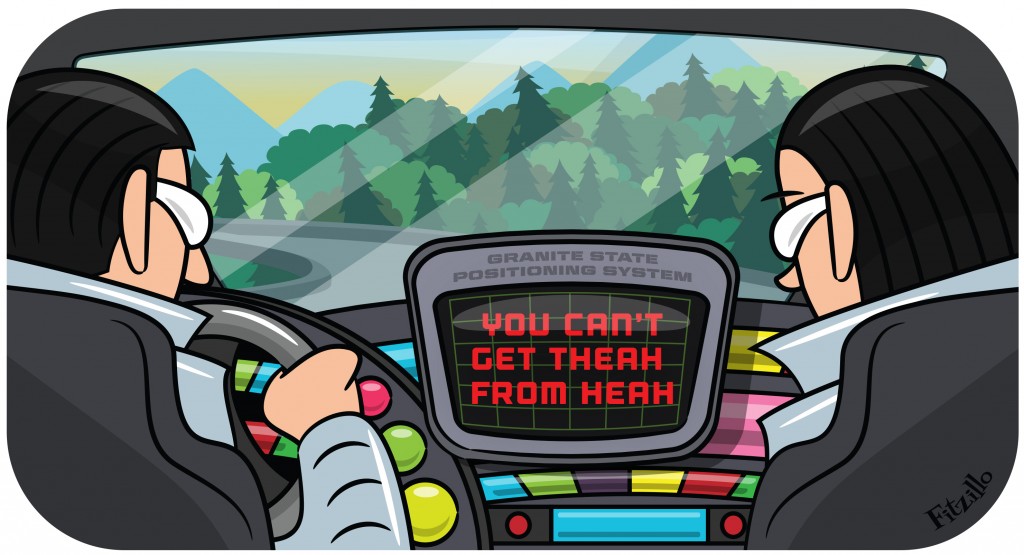 Growing up in Michigan meant never having to say you’re sorry for being late because nobody ever is. Since the mitten became a state in 1837, not one person has ever gotten lost. Roads in the Wolverine state follow the four cardinal directions and intersect at 90-degree angles. Detroit’s major east-west roads are numerically named: 8 mile road, 9 mile road and so on. Boring? Yes. Easy to navigate? Uh, yeah.

Then I moved to New England in 1984 and without the benefit of digital direction devices (no one in Michigan even owns a GPS), I was on my own. Oh, and many street signs here had either been stolen or were so weathered I never knew if I was in Bedford or Exeter while driving Route 101. Ten years ago, a new Pennsylvania-transplant friend mistakenly ended up in the North Country on what he thought was the Terry Francona Notch Highway.

We all know, for example, that exit 4 off I-93 is the ramp that will get you to the Londonderry Market Basket. That could change. New Hampshire Department of Transportation says the state’s sequential exit numbering could be replaced by a mile marker-based system. If the idea passes, exit 4 would instead be known as exit 12 based on its mileage from the Massachusetts/New Hampshire state line in Salem.

The announcement was brought up in November, and judging by initial response, you’d think that the state was closing our revered New Hampshire Liquor and Wine Outlets on Sundays.

One of the most charming things about our state is that when you ask for directions, a helpful stranger will point you to the town’s pizza shop by saying, “Go about a mile, just past the house with the John Deere tractor mailbox. Then take a sharp left until you see a white church. Then, reverse direction and you’ll find Brothers Pizza opposite Bucky’s Collision shop.” Ayuh.

If the proposal passes, and you want to get to North Woodstock from the interstate system, you’ll be directed to get off I-93 exit mile marker 97, currently known as exit 31. Live free and sigh. Or swear.

Here’s my suggestion. Forget mile-based exit numbering. Nobody wants that. Can’t we return to landmark-based orientation? So, if North Woodstock is your destination, the new exit sign might read, “Rocky’s Dairy Products Depot, formerly exit 31.” Everybody knows Rocky’s.

Even tollbooth identification can benefit. Out-of-towners will be pleased to learn that the Hooksett tolls will be identified as the “Former receptacle of Fun Spot tokens.” And now that Merrimack residents are no longer held hostage by paying a cover charge just to enter and leave their town, the remaining obsolete booths will be painted with Disney characters since Merrimack is finally the new happiest place on earth.

The opportunities to showcase nearby tourist attractions will add dollars to local economies. Impress your out-of-town guests with a visit to Portsmouth from I-95 via the “Mount Market Street salt pile” exit. If the state declines to implement the plan, the loss of federal highway funding could mean more unfilled potholes. But let’s look at the glass half-full. With bumpier roads come increased auto sales in New Hampshire.