How a tasty treat became a Hanukkah tradition 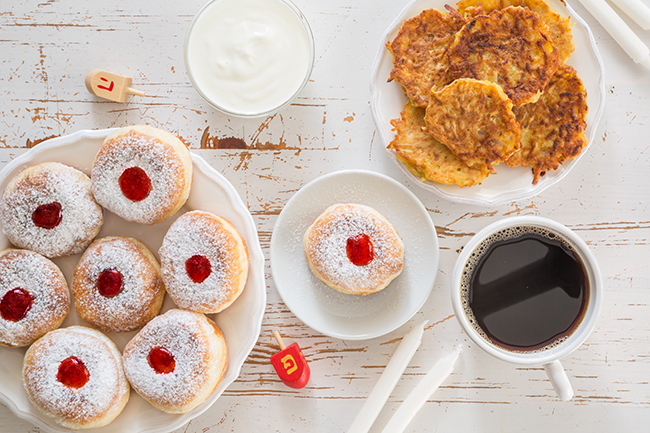 As far as holiday foods go, one of the best might be sufganiyot — or jelly doughnuts — eaten at Hanukkah celebrations. Beyond the fact that the puffy, gooey, sugar-sprinkled, deep-fried treats are ridiculously delicious, there’s a symbolic reason for why these are a Hanukkah staple. Along with latkes (fried potato pancakes), there’s the connection to oil, which commemorates the miracle of one night of oil lasting for eight.

But there’s a historical reason as well. In the 1500s, a German cookbook credited with the first jelly doughnut recipe was translated to Polish, and slave-produced sugar from the Caribbean became more widely available. No longer was sugar such an expensive commodity, and sweet pastries in general became more common. By the early 1600s, jelly doughnuts, called pączki (ponchiks in Yiddish), were popular in Poland for both Christmas and Hanukkah. Through the 19th and 20th centuries, the recipe traveled with Polish Jews when they emigrated to places such as Israel, which is where the name changed to sufganiyot from a “spongy dough” mentioned in the Talmud.

It wasn’t until the 1920s that sufganiyot became specifically and irrevocably tied to Hanukkah. The Israeli Labor Federation declared them the official food in an effort to create more jobs. The thinking went that latkes were easy to make at home, but the more complicated stuffed doughnuts required baking professionals. Perhaps there was a sudden boom of bakeries and delivery services, but the other result was that sufganiyot became forever intertwined with the Festival of Lights.

For the intrepid holiday homecook, try this sufganiyot recipe.

Directions
Proof the yeast by mixing together the yeast, 2 tablespoons of the sugar and the milk. Wait 5 minutes until it bubbles.

Sift the flour and mix it with the remaining sugar, salt, cinnamon, egg yolks and the yeast mixture.

Knead the dough until it forms a ball. Add the butter. Knead some more, until the butter is absorbed. Cover with a towel and let it rise overnight in the refrigerator.

Roll out the dough to a thickness of 1/8 of an inch.

Cut out the dough into 24 rounds with a juice glass, or any object that’s about 2 inches in diameter. Take 1/2 teaspoon of preserves and place in center of 12 rounds. Top with the other 12. Press down at edges, sealing with egg whites. Crimping with the thumb and second finger is best. Let rise for about 30 minutes.

Heat 2 inches of oil to about 375 degrees. Drop the doughnuts into the hot oil, about five at a time. Turn to brown on both sides. Drain on paper towels.

Roll the doughnuts in powdered sugar.