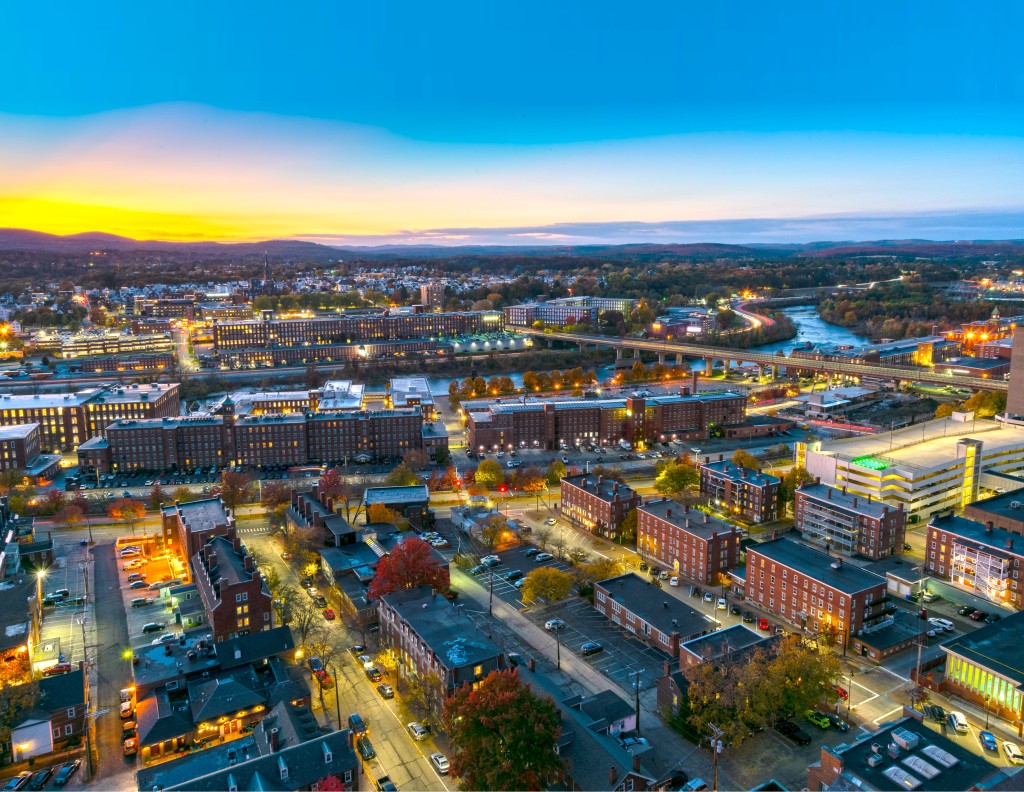 Manchester, the state’s largest city, has seen all the highs and lows of an urban center. During the 1970s and ’80s, as I was collecting my high school diploma from Manchester Central, the Queen City was experiencing the odd spasms of growing pains, with the massive textile mills along the Merrimack River falling into greater disrepair, and the mall sprawl stretching south toward Derry. It was difficult for me, an unabashed fan of the city’s economic anchor of Elm Street, to watch while businesses along this main thoroughfare withered.

Today, almost a half century later, Manchester’s downtown is again turning heads. Much of that has to do with an infusion of creative energy and good old-fashioned capital. Carol Robidoux, editor and publisher of Manchester Ink Link, says it’s nothing short of a cultural renaissance. 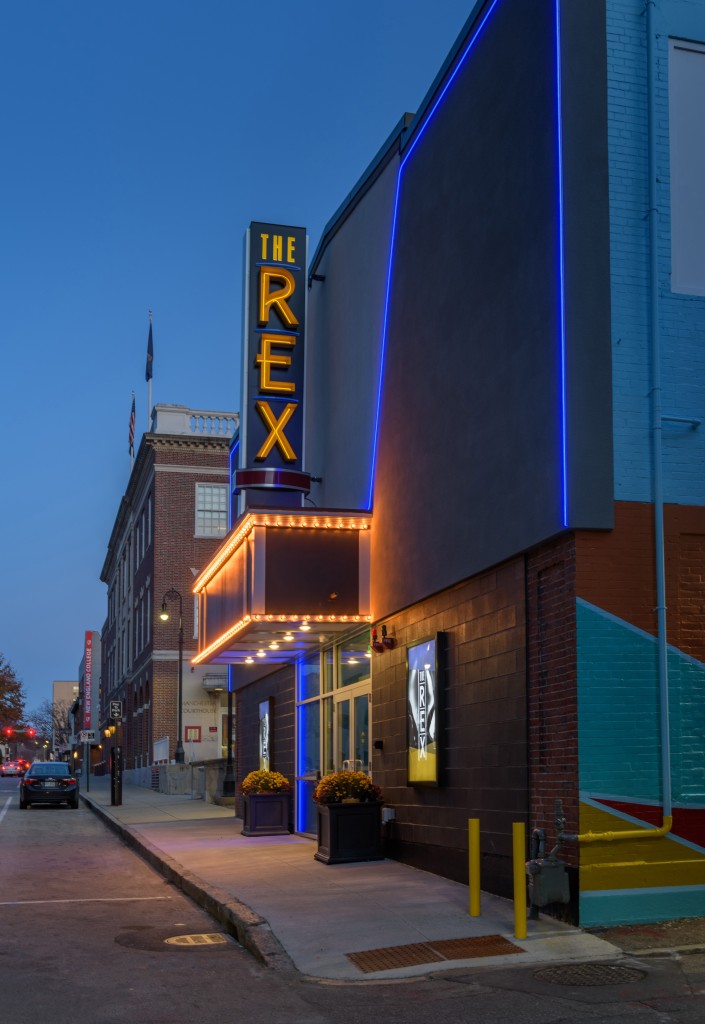 “Coming out of Covid, I’m seeing a ripple of new businesses opening their doors with a focus on social connection — The Goat, Angel City Music Hall, Diz’s Café, Industry East, Boards & Brews,” says Robidoux, who moved to the city in 2001. “The Shaskeen has always been that kind of place where the back of the house provides a mix of entertainment options. The Factory is bringing a distillery and an amphitheater to the south end of Elm Street, and is focused on creating a community around the arts.”

Robidoux also points to The Bookery, XO, To Share, HopKnot, and Stark Brewing, which have been “hosting some cool community spaces for everything from author talks and SEE Science Center’s monthly Science on Tap to Saint Anselm’s Center for Ethics in Society philosophical discussions,” says Robidoux.

“Even the Currier Museum has renewed its mission to connect with community in unexpected ways, striving to be truly accessible, including after-hours events, community festivals, and a ‘back door’ music venue,” she adds. “And speaking of museums, the Millyard Museum is seeing an uptick in membership that’s trending younger, attracting a generation interested in connecting the dots of history.”

Elizabeth “Liz” Hitchcock, a partner with her husband in the Orbit Group and a driving force behind The Bookery and Pinwheel Properties, including Factory and 848 Elm Street, says there’s a real synergy in the Queen City currently, uniting the arts and businesses. She sees the growth of retail businesses and housing downtown as “the linchpin to continuing growth in Manchester,” she says.

“Selfishly,” adds Hitchcock, “I also love the work that the arts organizations have been doing in Manchester as well, between the neighborhood block party at the Currier to The Rex at the Palace Theatres and the work that Bookery Manchester is doing. We know that arts is always the touchstone for growth in communities, and we have creatives in spades in Manchester.”

Stephen Thiel, Southern New Hampshire University’s assistant vice president of community impact, says there’s “a lot of entrepreneurial spirit flowing through the city, which can be seen in new businesses like The Terracotta Room, new bars like Industry East, and new restaurants like Diz’s Café.” Those businesses, he says, not only provide an entertaining day or night out on the town but can also inspire others to become small-business owners.

“It’s easy to get excited by the work of Manchester Proud [a citywide movement working in close partnership with school district leadership and the Board of School Committee] helping to share the great work happening in our public schools or by nonprofits opening new facilities like Friends of Aine [a bereavement support group] or Girls at Work [an empowerment program],” Thiel says. “Each of these developments speak to a focus on collaboration that’s permeating through the city that was supercharged during the pandemic.”

Enthusiasm for change and growth can be found at all levels, Thiel says. “Businesses are stepping up to support schools, residents and local leaders are improving mobility through groups such as Manchester Moves,”  he says, referring to the volunteer trail organization working to connect the city to the rest of the state via trails and greenways. “And city and federal officials are working to bring needed infrastructure investments to this region,” he says. “It’s heartening to see this collaboration continue.”

Like the mills along the Merrimack River, that type of collaboration has deep roots in Manchester.

“The beauty of Manchester is it’s a small-town big city — people want to feel connected, they want more social spaces, more walkability and mobility options, they want local shopping options, and, yes, a train to Boston,” says Robidoux. “The people who are changing the face of the city come from all corners of art and industry and education and civil service. We are fortunate to have so many ambitious, intelligent and caring citizens. That’s what will continue to lift us up.” 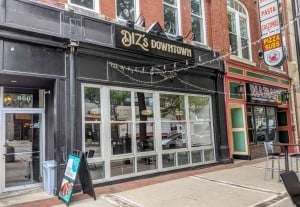 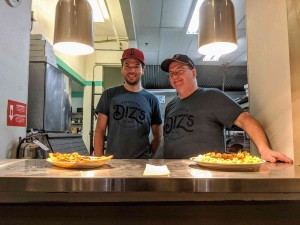 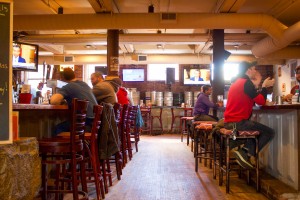 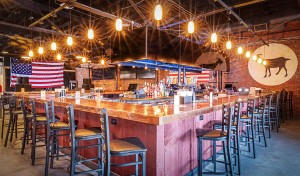 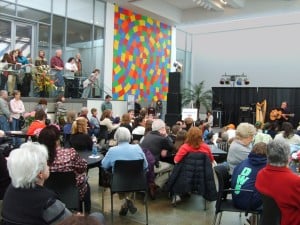 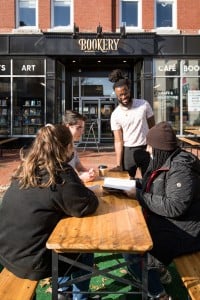