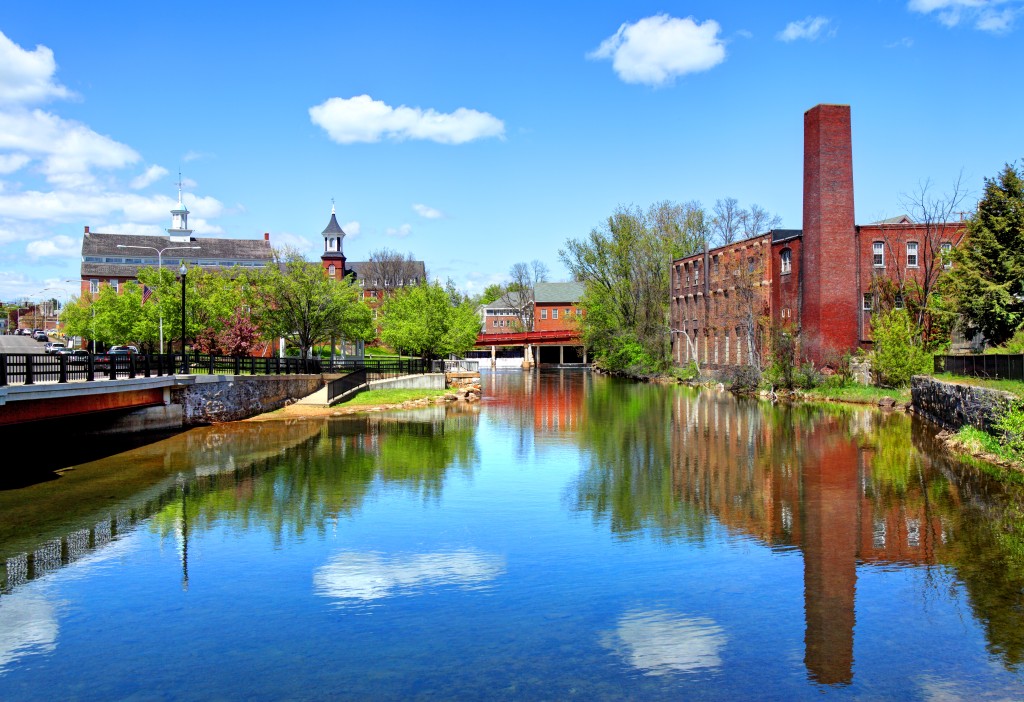 To the north, the college town of Plymouth has rallied around The Flying Monkey Movie House & Performance Center and Common Man Inn & Spa, which has spawned a number of outstanding spin-off spots, such as the intimate Six Burner Bistro situated in an 1850s-era farmhouse on Main Street (run by former Common Man staffers, including chef Sam Smyth). But if you’re traveling north on Interstate 93, you owe it to yourself to stop by the emerging lakeside city of Laconia. 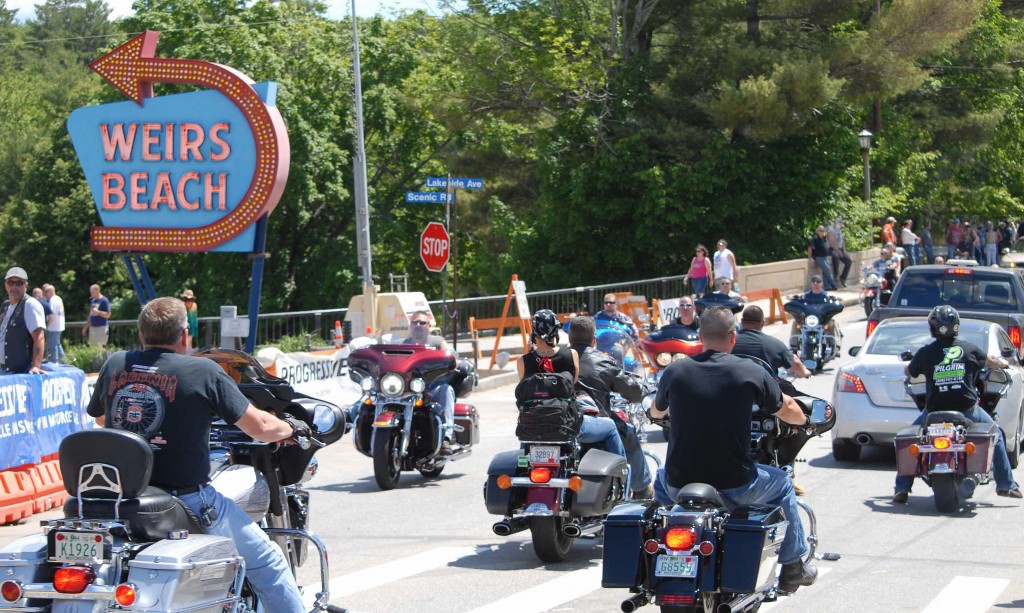 The famous Laconia Motorcycle Week will celebrate 99 years of riding legacy from June 11-19, 2022.

Perhaps known best for its famed Motorcycle Week every June (which dates back to the original Loudon Classic motorcycle race in 1916) and Weirs Beach on Lake Winnipesaukee, Laconia is developing an admirable year-round reputation in the arts and entertainment realm. One great example is the 761-seat Colonial Theatre.

First opened in 1914 (two decades after the city was officially founded in 1893), the theater was designed by George I. Griffin for stage productions, and owned by an Italian immigrant, Benjamin Piscopo. In the early 1930s, the theater transitioned to motion pictures, and by 1983, it had been divvied up into five separate movie screens. It closed in 2002, after 87 years, but in 2015 city officials partnered with the Belknap Economic Development Council to purchase and renovate the Colonial. Restoration work began a year later, and the theater reopened in 2021.

“I was on the committee that was helping plan the Colonial renovation project,” says Bryan Halperin, who works for the historic Belknap Mill in downtown Laconia running Powerhouse Theatre Collaborative, the resident theater company of both the Mill and the Colonial Theatre. “Excitement over that project almost immediately started attracting new businesses to the downtown area.”

Halperin notes that the Colonial’s renovation coincided with several residential projects (the city grew by 1,000 residents between 2010 and 2020), and the downtown now features a greater variety of businesses — Wayfarer Coffee, Burrito Me, Defiant Records & Craft Beer, Hector’s Fine Food & Spirits, and the Chaos and Kindness Experience (aka the CAKE) — and fewer vacant storefronts. 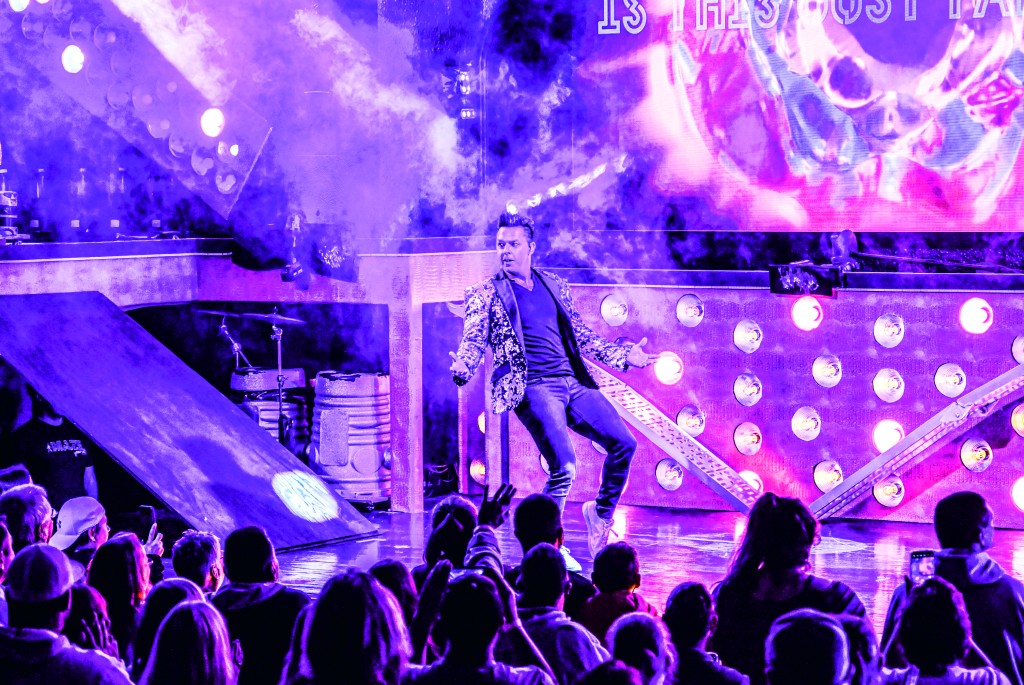 Recycled Percussion brings their Las Vegas-style show to Laconia at the CAKE Theatre in Veterans Square.

“As far as performing arts venues, the city has the Colonial Theatre, CAKE, The Lakeport Opera House and Granite State Music Hall, all in Laconia,” says Peter Lally, whose Spectacle Live firm handles bookings for the Colonial Theatre (in addition to the new Nashua Center for the Arts). “A year ago, it had just Granite State Music Hall. Three new live entertainment venues opening in the same year is amazing.”

The CAKE Theatre on Veterans Square is the performance venue for Recycled Percussion (band member Justin Spencer says the ensemble has invested more than $1 million into the property) as well as the Chaos and Kindness Experience, which is described as “an innovative brand and global movement” that, according to its website, believes “in the power of using our platform to inspire people to live a life of intention and passion, while giving back and spreading positivity.”

Still, it hasn’t been all wine and roses in Laconia. A popular live music hall, Pitman’s Freight Room, shuttered a year ago and was sold as a result of the pandemic. Former owner Dick Mitchell, now retired and living in Maine, says he loved the venue and the local vibe in Laconia, adding that it saddens him to see so many musicians looking for local gigs.

Despite the loss of Pitman’s, Halperin insists he’s upbeat about the lakeside city, believing that “arts can be the driving force to let people know that Laconia is a city on the rise,” he says.

“I think there will be continued investment in fixing up the buildings that need some TLC and more cool new businesses coming in,” Halperin continues. “We need a bookstore, we need more restaurants that are open for dinner — right now many are only breakfast and lunch places. The city needs to solve the ongoing parking garage problems once and for all, but after that’s solved, the city should continue to attract people downtown.”

Likewise, Lally says he’s witnessed “a pace of development [in Laconia since 2020] that I’ve never seen before in any of the communities in which we operate.”

He adds that, during that relatively short time, “three new restaurants have opened within 100 feet of the theater, the coffee shop across the street has doubled its footprint, new condos have been built above the theater, a community partnership has come together to create an amazing resident theater company that now calls the Colonial Theatre home, and two other performance centers have opened in Laconia,” he says.

“A list like that typically takes five to seven years, and I’ve seen it all spring up in less than two,” says Lally. “Word is traveling fast about the exciting happenings in downtown Laconia.”