Why I Hate Plato

You lead an interesting life.”

The comment caught me by surprise. It came from the lady riding with me from Concord to our destination in Claremont. She was in the process of becoming an interesting part of a life that I had thought otherwise rather bland.

My life, of course.

A lawyer, she had come to New Hampshire from her home in the South and was on the staff of the Franklin Pierce Law Center in Concord, which later became the University of New Hampshire School of Law. Her background was in intellectual property law, a field for which the school was a recognized leader. We didn’t talk about that much, since patents and copyrights did not fall within my sphere of interests. It was not what came to mind when I invited her to go with me to a concert by “Buddy Holly and The Cricketers.”

“Well, now, you’ve asked me to something that I am interested in,” she said, which left me a little bit deflated. After all, I had taken her to “An Evening With Thomas Jefferson” at the Dana Center at Saint Anselm College. I had taken her on a couple of hikes and to a political gala featuring half a dozen or more presidential candidates in Manchester. But she told me the music of Buddy Holly was something her late father had enjoyed. So she grew up hearing the music of that era. The words and music were familiar to her.

“How did you know about this concert?” she asked me. I told her I had seen it listed somewhere in some newspaper. That was when she told me I led an interesting life.

Then, looking back over the years, I silently reflected on some of the events I, at least, had found interesting. As a kid I had developed a lifelong passion for baseball and had been to games at New York’s Yankee Stadium, Ebbets Field and the Polo Grounds, as well as Boston’s Fenway Park. High school was pretty dull, but somewhere in my youth I had acquired an appetite for adventure that led to my enlistment in the Marine Corps. I survived Parris Island and went to Vietnam. I never did come face to face with the dreaded Viet Cong, but I did meet some interesting people. All sorts of athletes and entertainers came to visit us under the auspices of the USO. I served string beans to Nancy Sinatra when she showed up in fatigues in our mess hall one day, prior to singing for us that evening, dressed in her famous boots “made for walkin’”and micro-mini dress.

One evening I walked into the enlisted men’s club and found baseball stars Joe Torre and Harmon Killebrew there. I knew of those men and their accomplishments on the diamond and was delighted to meet and chat with them. Killebrew seemed surprised when I mentioned the first year he led the league in home runs.

“Yeah,” he said his eyes widening at hearing in a pub in Vietnam about rockets he’d launched in ballparks half a world away. But there we were. Me and the Killer. Talkin’ baseball.

Years later, as a reporter, I would find Ted Williams at a spring training field in Florida. He perfunctorily answered a couple of my questions as we stood behind a batting cage watching young hitters take batting practice. Then he turned and caught a glimpse of my sunburned face.

“Well, you better do something about that nose of yours, I’ll tell you that right now!” he thundered in that booming voice reputed to flush flamingoes from their nests. “Jeez, ya look lousy!” Well, no doubt I did, but don’t think for a minute that I was intimated by his gruff demeanor, just because he was the great Ted Williams, a genuine Hall of Fame legend and the last man to hit .400 for an entire season. No, I stood my ground and said: “Yes, sir.”

I saw the Bob Hope show in Da Nang, then caught up with the legendary comedian as he stood next to the airplane that would take him and his fellow entertainers to their next stop. I thanked him for the show and for his devotion to America’s armed forces. The lift those entertainers gave us was incalculable.

In New Hampshire, I got to interview a number of current and former presidential candidates, including Eugene McCarthy, one of the heroes of the turbulent 1968 campaign. And it was on a mild June night in 1968 that I stood with a few other autograph seekers in the parking lot outside Dodger Stadium in LA, chatting with Dodgers’ pitcher Don Drysdale when we all heard the news that Bobby Kennedy had been shot at a hotel in downtown Los Angeles, where he had been celebrating his victory in that day’s California primary.

I celebrated my return to civilian life by hitchhiking home from the West Coast, making stops along the way to see historic sites like the Alamo in Texas and Fort Sumter in South Carolina. I traveled with a group of hippies through Arizona and New Mexico and met an elderly rancher in West Texas, who demonstrated his ability, with one ear-piercing rebel yell, to summon a herd of cattle that promptly surrounded us in his pickup truck. “There!” he said triumphantly “Can you do that with your cattle?” Not a chance, I thought, as I tried to imagine all those beasts roaming about in my little backyard in South Meriden, Connecticut.

Then there was the very genteel lady at the Statehouse in Montgomery, Alabama who, having proudly pointed out the “first White House of the Confederacy,” next turned my attention to a building less favored. “That church over there,” she informed me, “is where Martin Luther King got all his bright ideas!” 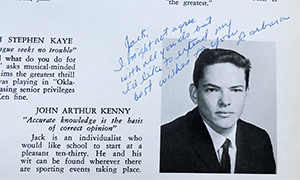 About the Author: John (now Jack) Kenny appears above in his 1964 yearbook from Pratt High School in Meriden, Connecticut. His interesting life eventually led him to become a longtime columnist for the NH Union Leader and to write for this magazine.

I saw Johnny Cash perform at Bushnell Hall in Hartford when the “Man in Black” was at the very height of his fame. I made a couple of trips to Rome and managed to hike all the 4,000-footers in New Hampshire’s White Mountain National Forest. It’s nothing to brag about and surely many others have led more exciting and eventful lives. But I guess my pretty young friend was right.

In my own peculiar way, I had been leading an interesting life. And it was getting more interesting as we danced that evening to the music of “Buddy Holly and The Cricketers.” But, soon after, she went back to her native Southland to pursue her career there.

We have kept in touch over the years in a friendship that remains purely Platonic.

No wonder I hate Plato!