Brilliant ideas to build up a fifth season 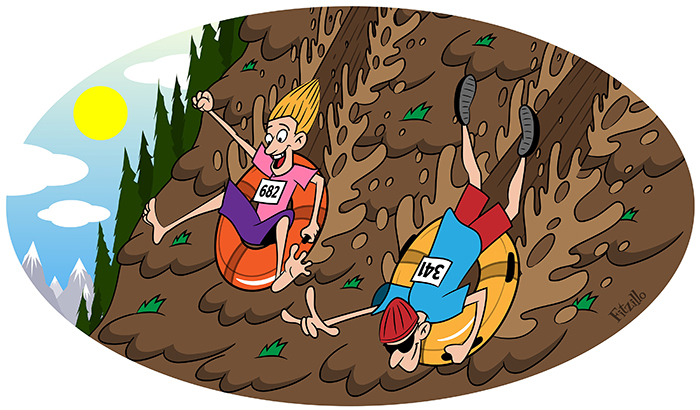 Some time ago, I wrote about my idea to turn mud season into a tourist draw for our town like foliage season. So far, we’ve had limited success. That’s government talk for absolute failure.

The first problem is knowing when mud season will happen. Around here in the spring, the weather can’t decide what it’s doing. Snow? Sleet? Rain? Freezing rain with a dash of hail? You can’t plan anything until the weather calms down and starts taking its medication around May 1.

Our local pundits (the guys at the counter of the Bluebell Diner, who don’t have much to do beside punditting) try to predict mud season based on weather forecasts, historical averages and their increasingly faulty memories. As prognostication goes, this is right up there with studying chicken entrails (which we would try, if Homer Andrews weren’t so stingy with his birds).

We do have a Mud Watch report on our local radio station (WHAT) so people from away can plan their visits during “peak mud,” but the station’s signal only reaches to the outskirts of town even on a windy day, so that doesn’t help much.

The weather has also ruined some events, like the mud sculpture contest (inspired by those sand sculpture contests at the beach). Bert Woodbury’s highly detailed sculpture of a ’57 Farmall tractor would have won if it hadn’t started to rain. Turns out, the sculpture actually was Bert’s ’57 Farmall, to which he just added a little more in mud.

Then there was the mud pie contest. About that, the less said, the better.

Still, a few other organizations around the state have jumped on the mudwagon:

The ski season never ends at Mount Fillmore in picturesque Mittibittiwittisquam, New Hampshire. “Toward the end of March, we haul out the mud skis, mud boards and mudboggans,” says manager Irene Muckmore, who promises 6 to 12 inches of finely groomed mud on all trails, including the notorious black diamond “Washboard Alley.” Après slush, stop by the lodge to warm up with a cup of Café Muddachino, a hearty brew Irene stumbled on when she bought those cheap paper filters from the Odd Lots store.

Shiver your timbers at the site where Captain Josiah Henderson accidentally scuttled his ship in the mud of Portsmouth Harbor back in 1763 because he was busy knitting a tea cozy at the time. Dispatched by his embarrassed crew, Henderson’s ghost can sometimes be seen at low tide crying out, “Knit one! Purl two!”

Historic Waverly Mansion in Willardville, New Hampshire, built in 1912 by eccentric millionaire Willard Waverly, was constructed entirely of mud bricks along the banks of the Connecticut River, into which it threatens to slide every spring. The National Historic Register has designated the mansion “A Really Strange Place.”

The life work of curator Walter Thurlow, this museum promises minutes of fun for the whole family, with features like: Mud Through the Ages (including actual mud from Mesopotamia), Mud Goes to Hollywood (classic film clips featuring mud) and Walter’s whimsical “Dirty Pictures” (PG-13). If the mud season idea doesn’t pan out, I’ve got another idea I’m working on: gluten-free, non-GMO, low-fat, vegan
maple syrup. I know, that’s basically all maple syrup. But folks around here are depending on me, and if this doesn’t work out, my name will be … well, you know.