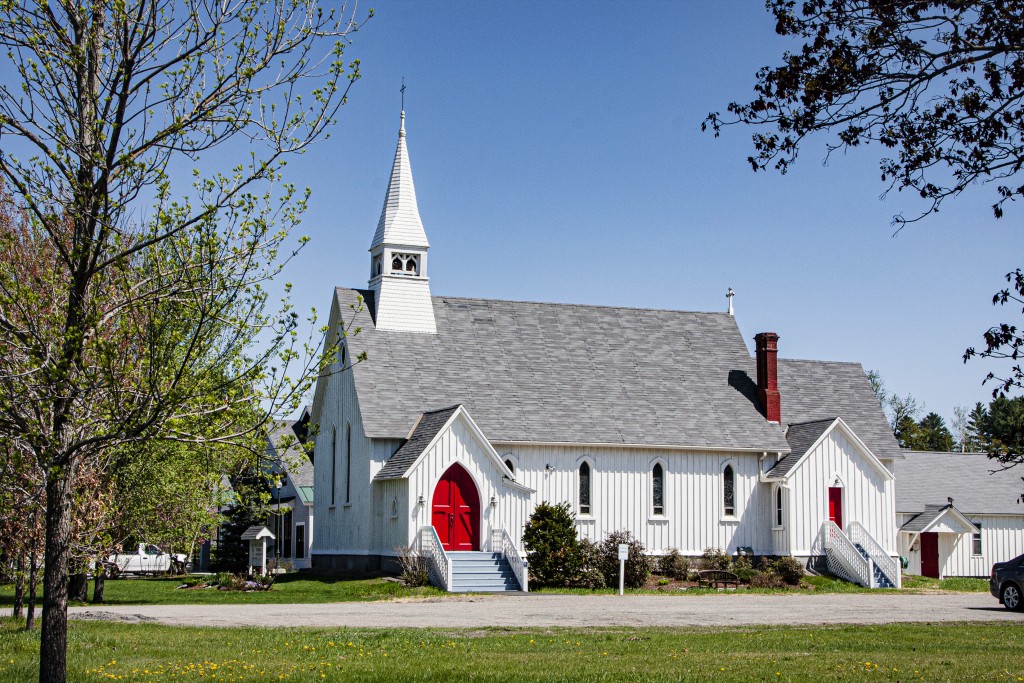 We entered Lancaster on Route 3 over a shoulder of Mt. Prospect, where we stopped to visit the summer estate of John Wingate Weeks, now Weeks State Park. Sitting at the summit of the 2,037-foot mountain, the estate overlooks a 360-degree panorama of Lancaster, the Presidential Range and the Upper Valley of the Connecticut River.

Much of that landscape is part of the vast White Mountain National Forest, which — along with the entire National Forest system — was created as a result of the untiring efforts of Weeks himself. His home, carriage house and round stone tower combine to form a beautifully preserved example of an early 20th-century summer estate, and exhibits inside tell more about his conservation work.

Five miles of trails weave through the park, one of which circles the base of Mt. Prospect and connects to the 12-mile Lancaster portion of the New Hampshire Heritage Trail. The trail continues into town, with markers noting some historic sites, including the 1862 Mechanic Street Covered Bridge over the Israel River. A second, Mt. Orne Covered Bridge, crosses the Connecticut River from Lancaster to Lunenburg, Vermont. That double-span bridge was built in 1911 to replace the one destroyed in 1908 by a logjam created by timber from the northern forests carried on the rushing waters of the spring melt-off.

The smaller Israel River runs through the center of Lancaster, beneath the stone and brick walls of Copper Pig Brewery, known for its Little Piggy Porter, Kilkenny Irish Red and Ice Jam Lager, as well as seasonal brews. The “pig-centric” menu includes brown-ale-braised pulled pork sliders and tacos of locally sourced pork marinated in Kilkenny Red. We noted that the pretzels and breads are from the Polish Princess Bakery, just up Main Street.

Sharing the former mill building is the William Rugh Gallery, which represents painter Ed Widmayer, art photographer Fletcher Manley, engraver Kathleen Cantin and furniture craftsmen Peter Guest and Dana Southworth, along with other artists and crafts people. Across Middle Street, a former bank is now the home of Simon the Tanner, which carries quality boots, shoes and clothing for the outdoors. 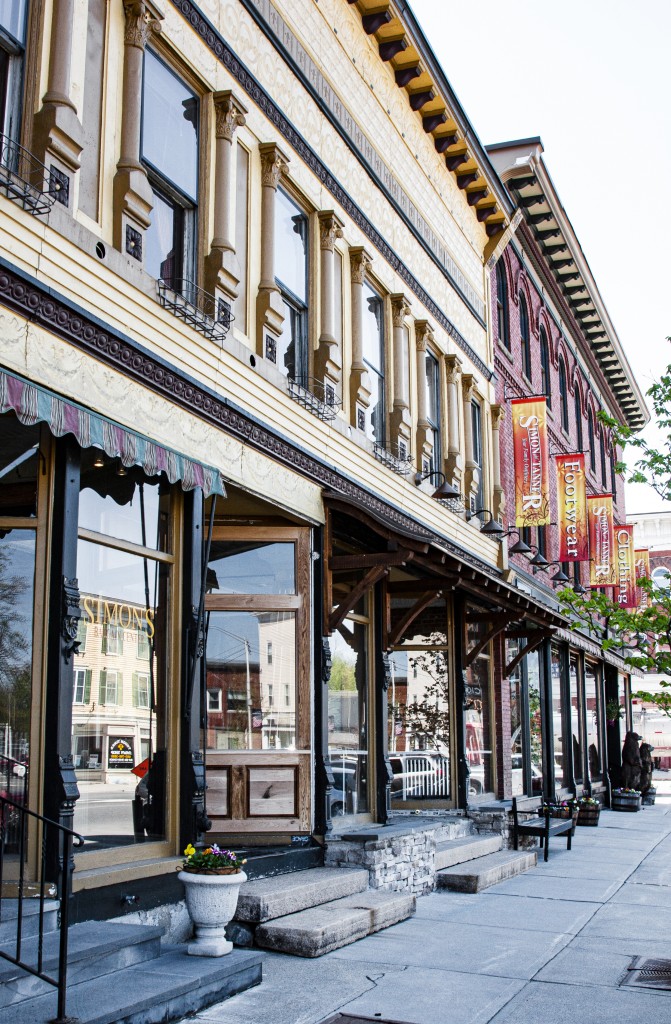 Stores along Main Street in Lancaster. Photos by Stillman Rogers.

Farther along the brick mercantile building that forms one side of Main Street is the Polish Princess Bakery, which began in 2008 in the kitchen of Magdalena Randall. It has grown to an inviting bakery/café featuring buttery Polish and European pastries and a selection of French breads, hearty ryes and sourdoughs made from natural unbleached flours and freshly ground flours milled locally from organic grains. Pastries include fruit kolache, Polish poppyseed rolls and Lithuanian honey cake, along with scones, lemon tarts and sticky buns.

Browsing in Israel River Trading Post, we found an impressive collection of antiques, curiosities and vintage treasures. That reminded us of another trove of antiques and vintage goods that we had discovered several years ago on our way to the Lancaster Fair. Potato Barn Antiques is not just an antiques shop. It’s more like a collection of shops, with entire rooms devoted to single themes, such as antique tools or lighting fixtures from all eras. There are sections devoted to quilts and textiles, books, art, advertising and paper collectibles, Christmas and other holidays. An entire sub-shop called Lady’s Slipper Vintage is filled with ladies’ clothing, hats, costume jewelry and accessories dating from the 1860s through the 1960s. It’s like a museum where you can take home the exhibits.

Dedicated antiques shoppers will find more at the flea markets held by the Lancaster Historical Society on alternate Sundays beginning in late May. These are at the society’s Wilder-Holton House Museum, which occupies the oldest house in Coös County, and the first two-story house built in this part of New Hampshire. For its first decade, until a meetinghouse was built, the house was the scene of both town meetings and church services. The 1780 farmhouse has the further distinction of being one of the few places in the state that are believed to have been a station on the Underground Railroad. Because harboring fugitive slaves was illegal even in the north, there is little documentation of safe houses, but as the owner was an active abolitionist it is relatively certain that this was one. 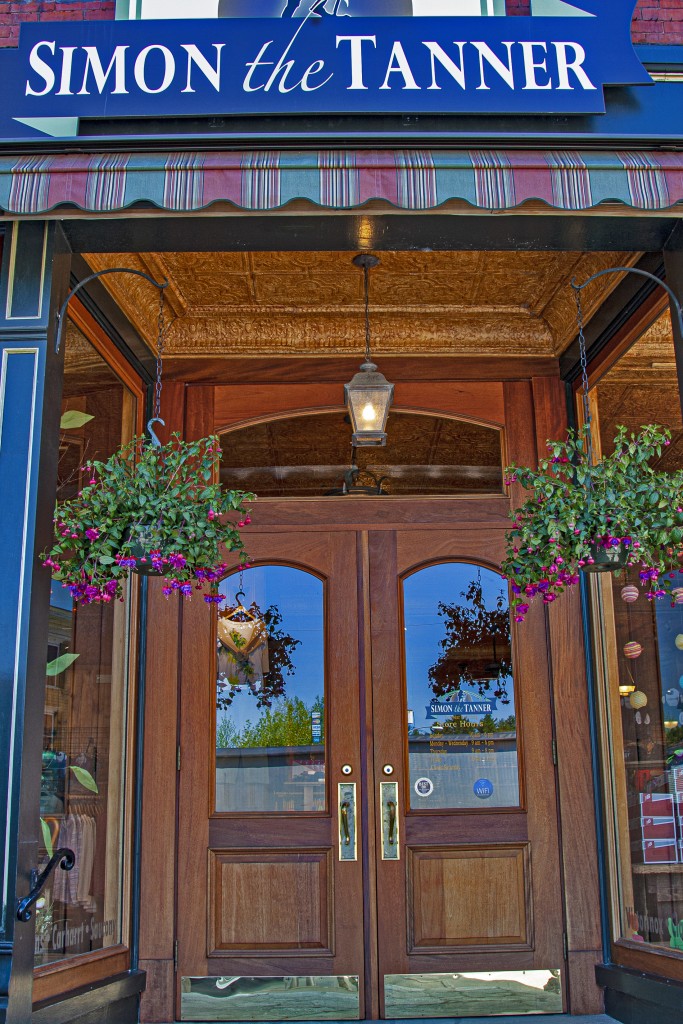 Like the two covered bridges, the house is on the National Register of Historic Places. Displays inside include antique tools, furniture, decorative items and utensils, including a hand-cranked vacuum cleaner. It’s not all ancient history — the kitchen is fitted out in tools and décor of the 1940s and ’50s.

Another of the older homes in Lancaster is the Stone House, easy to spot on Main Street for its granite walls and elegant pillared façade. It was built about 1840 from blocks taken from one giant boulder, a glacial erratic that stood near Lancaster’s border with Northumberland.

Our final quest in Lancaster was New Hampshire’s last working commercial sawmill operated solely by waterpower, and to find it we left the downtown on Middle Street and Grange Road. The Garland Mill has been in continuous operation since 1856, driven by water from Garland Brook. Power transmission through shafting, pulleys and belts uses original technology dating from the Civil War era. One of the last operating examples of its kind in New England, the family-owned Garland Mill is listed on the National Register of Historic Places.

Timber frame construction is the specialty today, and in an open shed near the mill, we found mortised joints in progress. More than just a historical curiosity, Garland Mill’s use of old technologies has made them a net energy producer. When the system is not used for milling, it generates power that’s sent to the grid and on an annual basis the mill produces more electricity than it uses.