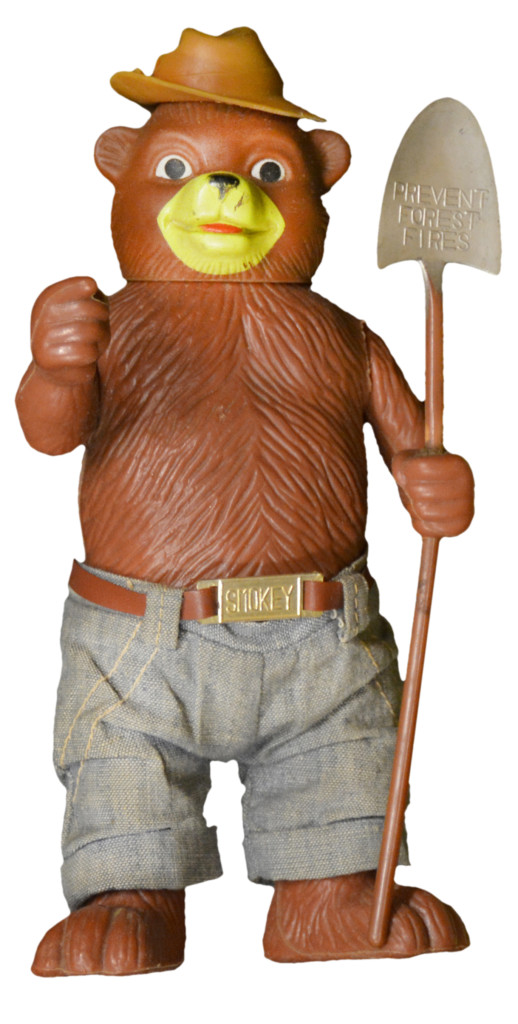 Anyone who’s ever been to summer camp or roasted marshmallows over an open fire is sure to know the wildfire fighting bear who’s been “prowlin’ and a-growlin’ and a-sniffin’ the air.” Smokey Bear has been on patrol for 75 years this August, and New Hampshire — which has its own special ties with Smokey — is making a big deal out of the milestone.

Smokey got his start as a print advertising campaign designed by the War Ad Council in 1943 — right on the heels of the 1942 Walt Disney film “Bambi,” which famously depicted the dangers of forest fires. Disney allowed the use of Bambi for one year for forest fire awareness campaigns; the Ad Council created Smokey as a follow-up.

If you remember Smokey as a live bear, that came later when an injured, orphaned black bear cub was found clinging to a burned tree after a wildfire in New Mexico in 1950. He was rescued and rehabilitated, and quickly named after his illustrated predecessor. The real live Smokey spent his days at the National Zoo in Washington, DC, serving as an ambassador for wildfire safety until his retirement in 1975. The national Junior Forest Ranger Program generated so much mail to Smokey that the USPS issued him his own zip code, 20252.

For generations, Smokey has visited schools and summer camps, community events and hospitals. You may have fond memories of your own time meeting Smokey. But spending time as Smokey means more than putting on the costume; there is a strict list of behaviors that Smokey does and does not do — and they were laid out by New Hampshire’s Jim Ricard at the first National Smokey Bear Workshop in January 1970. It’s a long list, and includes “Be sincere, kind, rugged but not rough,” “Never walk rapidly toward small children” and “Never take the job of appearing as ‘Smokey’ lightly.”

New Hampshire and Smokey go hand-in-hand. Ours is one of the most forested states in the country — 83% is categorized as forest — and the pulp and paper industry has been a major factor in our economy for 150 years. Today, the timber industry continues to supply good jobs, recreation in our forests brings visitors year-round, and healthy forests contribute to cleaner air and water.

Because of this, helping prevent — and control — wildfires is important. New Hampshire actually has two fire seasons: in the spring, when sunlight dries out the forest floor and grasses that have been covered in snow, and again in the fall, when trees shed their leaves and become fresh fuel. 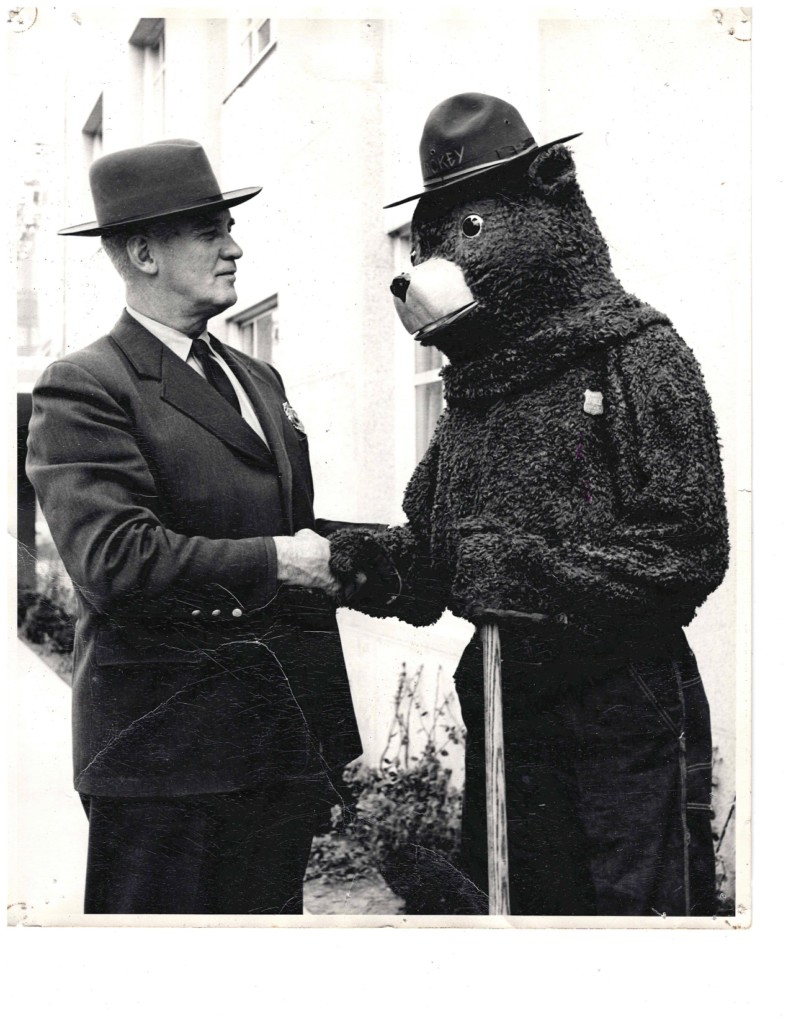 Jim Ricard, who wrote the rules of behavior for the costumed Smokey in 1970, gets to meet the subject of his guidelines.

Smokey Bear is still important today because 90% of all wildfires are caused by human involvement or carelessness, and his famous line, “Remember: Only you can prevent wildfires,” makes clear the need for people to remain vigilant. On average, New Hampshire experiences 250 wildfires each year, resulting in 250 acres burned. That may not seem like a lot, but it’s because our wildfire fighting professionals know how to contain fires quickly and efficiently. They know that even the smallest fire can spread, and that wildfires can destroy homes, businesses and human life.

There are 15 state-owned and -operated fire towers that are used for wildfire detection during periods of high fire danger; some even pre-date Smokey. They’re open to the public when they are staffed and they offer amazing views of the surrounding landscape. You can drive to some of the towers and others require a vigorous hike, but each has its own charms. The NH Division of Forests and Lands operates a Fire Tower Quest program that maps out each fire tower and provides directions for visiting. If you make the trek to five towers, you receive a certificate and a cool patch that acknowledges your accomplishment — and bragging rights, of course.

This summer and fall, Smokey Bear will be visiting fire towers and public libraries as well as other venues. On August 15, he’ll be having a big party at Franconia Notch State Park, with music, fire trucks, birthday cake and tethered rides in the official Smokey Bear hot air balloon. And Smokey is asking all those who care about our forests to post a picture of themselves with him, with some homemade Smokey artwork or with a carving of him — lots of fire stations in the state have them — along with the hashtag #NHLovesSmokey to social media.