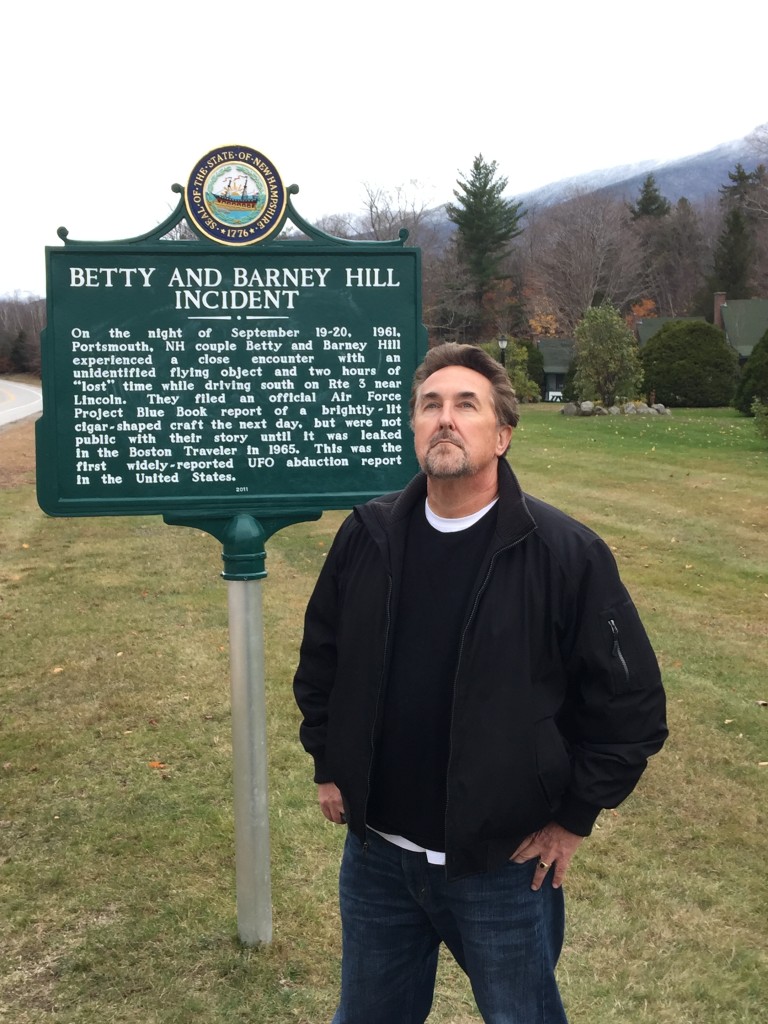 Photo by Jared Zabel
CURRENT TEXT (with inaccurate portion in: red): Betty and Barney Hill Incident: On the night of September 19–20, 1961, Portsmouth, NH couple Betty and Barney Hill experienced a close encounter with an unidentified flying object and two hours of “lost” time while driving south on Rte. 3 near Lincoln. They filed an official Air Force Project Blue Book report of a brightly-lit cigar-shaped craft the next day, but were not public with their story until it was leaked in the Boston Traveler in 1965. This was the first widely-reported UFO abduction report in the United States.

Bryce Zabel is a stickler when it comes to the story of Betty and Barney Hill. After all, the investigative reporter and Hollywood producer created an episode of his Emmy-winning NBC-TV series, “Dark Skies,” about it, and he has the book “Captured! The Betty and Barney Hill UFO Experience,” by Betty’s Hill’s niece Kathleen Marden, under contract. But Zabel says the 92 words forged in metal for New Hampshire Historical Marker #0224, regarding the Hills, contained two key misrpresentations of the facts of the case.

“The idea that Betty and Barney Hill ‘were not public with their story’ is inaccurate,” wrote Zabel. “While not actively seeking publicity, the Hills did tell their story to numerous individuals — friends, family and co-workers — plus, they filed two official reports.”

More importantly, Zabel noted, “The Boston Traveler did not ‘leak’ the story of Betty and Barney Hill, the newspaper ‘reported’ it. Leak is an incorrect, pejorative way to describe journalism. Award-winning investigative reporter John Luttrell broke the story in a legitimate, responsible and ethical manner.”

Zabel added, “I think that THE local story is the one about John Luttrell and the Boston Traveler and their pursuit of the story wherever it took him across New Hampshire. … For years, history has really held that “The Interrupted Journey” by John Fuller was the ultimate investigative piece, something I’ve made a big deal about this year as being definitively not true. … it was Luttrell who broke the story through guts and patience and good journalism. Fuller not only stood on Luttrell’s shoulders, he also fudged key facts (i.e., leaving out the anal probe, substituting a car jack when Barney actually had a gun), which is not exactly what journalists are supposed to do. Luttrell has been vilified for years by people who simply do not understand how journalism works.”

Zabel reached out to the New Hampshire Department of Historical Resources to request corrections and found them cooperative, hoping that the new sign might be ready for the 60th anniversary of the Hills’ alledged abduction (last year). A more recent call to the department indicates that, with supply-chain issues affecting the foundry they use, it might take another five years to finally set this story straight.