Alien adventures in the Granite State 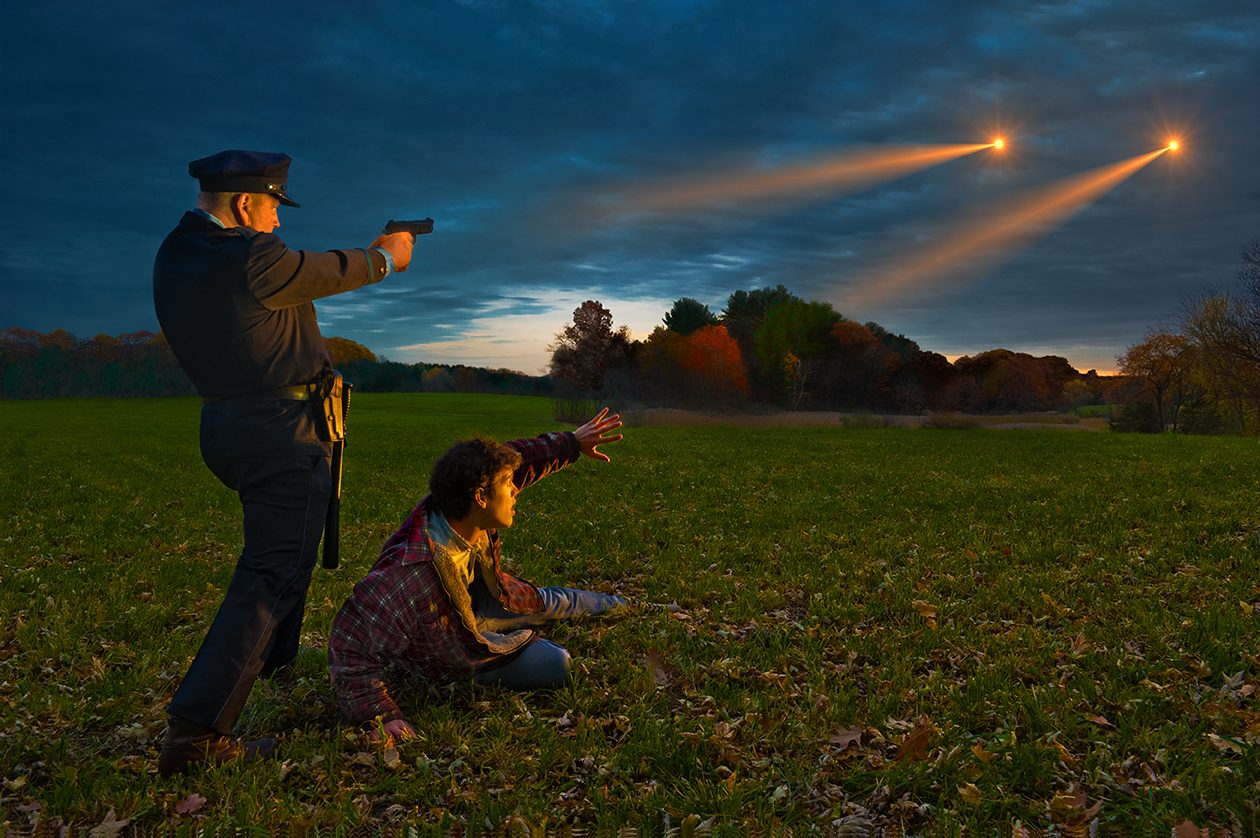 This photo is a fictionalized recreation of one of the most famous UFO incidents in New Hampshire his-tory, assembled by photographer David Mendelsohn for a story that appeared in New Hampshire Magazine, September 2015.

Ever since Ezekiel saw a fiery, celestial wheel-in-a-wheel in the skies of ancient Chaldea, people have been sharing their tales of instrusions into our Earthly airspace, but few such tales echo in the vaults of history. New Hampshire is the setting for two that do, and these two still shape the way we look at — and look for — UFOs. This year, “disclosure” efforts are underway in Congress and the Department of Defense, and it’s been 75 years since the world was told that a flying saucer had crashed in Roswell, New Mexico — a  report that was quickly denied and covered up. With sightings seemingly on the increase, this month seems like a good time to review our own pieces of the great UFO puzzle.

The hooded headlights of the 1957 Chevy Bel Air sliced into the night over Route 3 near Lancaster. Eerily quiet on this clear, temperate evening, not another car was in sight. Brilliant stars silvered the sky, fighting the light of the gibbous moon. Four miles south of Lancaster, the female passenger watched what looked like a falling star strangely moving upward. Over the next hour, its light grew, moving in closer until it appeared as a silent rotating craft lighted on one side. Erratically but swiftly, it approached and backed off their vehicle. Rounding a bend in the road near Indian Head south of Franconia Notch, the driver slammed on the brakes in the middle of the road as the light from the hovering silent airborne craft shrouded their car from about 80 to 100 feet overhead, then set down within 100 feet of him. Through the binoculars, the driver could see figures … not human.

Engulfed in the blackness of the late summer New Hampshire night, a teenage Navy recruit walked down the quiet country highway. Suddenly, a huge bright object loomed above him. Throwing himself on the ground to avoid being hit, blood draining from his face, he huddled against a stone wall. Intense bright lights pulsated around an apparent ring on “the thing” above him. Silently wobbling and floating in the sky, approaching at close range in his direction, it eventually backed off far enough to give the terrified teen the chance to run to a nearby house where he fruitlessly screamed and banged on the door. Finally, a car driven by a middle-aged couple came along and took the hysterical Norman Muscarello to the Exeter Police Department.

Muscarello’s experience was confirmed and shared by several others, including police officers. It became a famous book, “The Incident at Exeter,” by Saturday Review columnist John. G. Fuller.

The Betty and Barney Hill UFO Experience and the Incident at Exeter are the top two alien adventures in the state. Each is high on the global credible-UFO list, in spite of initially being disclaimed by the government. The Hills’ experience is considered the fourth and most extreme kind of UFO encounter, an abduction of the witness or other direct contact. The third kind of encounter is ground contact with close observation of animate beings associated with the UFO. The second, observation of a UFO in close proximity with physical vestiges. And the first, testimony with a witness stating up-close contact within 500 feet. 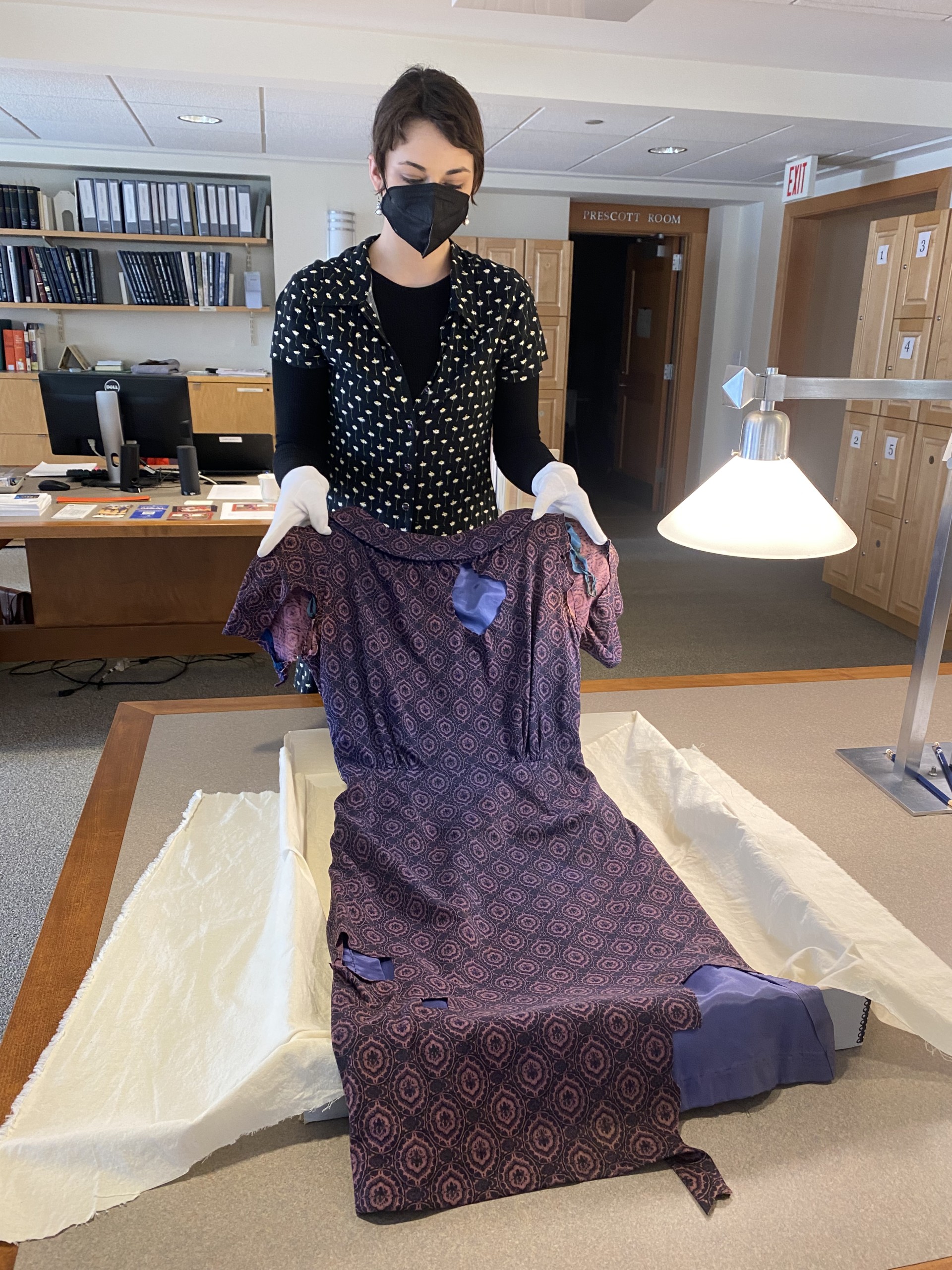 In a plain gray rectangular box, unassumingly resting on its laurels along with pages and pages of ephemera and hypnosis transcripts from the Betty and Barney Hill alien abduction, the acetate sheath indigo blue dress worn by Betty on that infamous night is the most popular and commonly requested inventory from the UNH archives. With extensive staining and tearing damage to lining, hem and zipper — allegedly caused by extraterrestrials — the garment also shows swaths cut by scientists who discovered an “anomalous biological substance.” She remembered that the aliens had struggled with the central zipper at the back of the dress that was also powdered with a pink substance. Seeing the condition of the garment after the abduction, Hill says she originally threw the dress in a trash receptacle then hung it on the clothesline where the pink powder separated from the material.

According to Susan Howe, New Hampshire MUFON (Mutual UFO Network) state director and also on the CAG (Case Assistance Group) and CAG team, the Hills were the first abductees (now called “experiencers”) by aliens (now called “entities”) in New Hampshire. She added that the first recorded UFO sighting in the state allegedly took place on Mount Washington in the mid-1800s. And it didn’t end there.

Howe notes, “Out of 674 reported cases in the state scientifically researched by MUFON between 2006 and 2022, investigators classified 109 as unknown. Within the unknown cases 30 were triangle/boomerang/chevron-shaped objects, 12 were cigar/tic-tac bullet/cylinder-shaped, 12 were disc-shaped, one was sphere-shaped, five were fireballs, nine looked like stars, and 12 were listed under other/unknown-shaped. Four involved entities.”

Interestingly, the highest number of unknowns by county was in Rockingham County, where the Incident at Exeter occurred. The active database at MUFON reports 24 sightings from 2006 to the present from that county. Grafton County, where the Hills were abducted, reported 11 unknowns. Within a 12-month period from March 2021 to March 2022, MUFON determined four cases to be Unknown Aerial Vehicles, two in Belknap County and two in Grafton County. MUFON also notes that their active database begins in 1986 but that cases go back much further. Howe adds that there is a glacial circle, a bowl-shaped area, northeast of Castle in the Clouds and around Keene and Hanover, that seems to be popular with UFOs. Mostly triangle-shaped aircraft are reported there. The craft that accosted the Hills was a flat, circular disc, perhaps 60 to 80 feet in diameter with a double row of rectangular windows extending across its rim.

The Hills were on their way home from Colebrook to Portsmouth when they noticed something in the sky was following them, ultimately stopping. Barney approached it, looking through binoculars, .32 pistol in hand, when the saucer displayed red lights and tilted toward him. He saw strange humanoid creatures through  rectangular windows. Fearing capture, he ran back to the car, warning Betty. By the time they were speeding down the road, the vessel was overhead and they felt a penetrating electric vibration along with a cadent buzzing sound from the trunk. They later remembered a second series of buzzing 35 miles down the highway, where they found themselves on a dirt road blocked by a huge, fiery orb. By the time they reached their home, they had lost two hours of the night.

Revealed under hypnosis, their incredible saga told of being forcibly taken aboard the ship by barrel-chested, short, humanoid, black-eyed figures. The Hills were both physically violated in examinations. Betty’s favorite blue dress was torn. Barney’s shoes were scuffed and the strap on his binoculars broken. The beings performed what seemed to be an amniocentesis test on her. The aliens were confused about the function of a zipper and that Barney’s teeth came out but Betty’s did not. They took samples of hair and fingernails. The Hills’ watches stopped.

After the abduction, more issues came to light. Barney had a concentric circle of warts form where the aliens had placed a cupping device. Marks on the trunk of their car made a compass spin. Betty’s dress was soiled with a mysterious substance that could not be identified. Even their healthy dachshund, Delsey, had physical repercussions. Under hypnosis, Betty recreated a “star map” from the wall of the spaceship. Some of her celestial marks were of stars not discovered until later years.

Much of their abduction story could not be refuted.

And the same is true of the Incident at Exeter, which happened four years later.

From eyewitnesses on Rochester Hill looking toward the seacoast to the reports from residents in the Hampton, Exeter and Kensington area, testimonies declared as fact added up until there was convincing evidence of a visit from a classic UFO.

On that calm, clear night in September, reports flew in to the local police departments and Pease Air Force Base from those who had seen something otherworldly in the sky and near the ground.

By the time Norman Muscarello burst into the Exeter Police Department to report his attack, the dispatcher had already fielded a number of similar reports. The dispatcher radioed police officer Eugene Bertrand, who had already placated a woman with her own account of the UFO who had pulled over on Route 108. He took Muscarello back to the scene where the officer saw what he described as “this huge, dark object as big as a barn over there, with red flashing lights on it” that was moving in dead silence toward them. Holstering his service weapon, thinking it unwise to shoot, he called police officer David Hunt for backup. The three men witnessed an object about 100 feet away and about 100 feet in altitude as it swayed with pulsating red lights flashing in rapid sequence in a left-to-right cycle.

Betty and Barney Hill’s abduction and the Incident at Exeter have defined the terms of the alien experience ever since. These events on two September nights in New Hampshire remain among the best-documented and best-publicized in UFO history.

In the UNH archives, a pale, indigo-blue, tattered and stained dress speaks to the time when extraterrestrials allegedly abducted two Portsmouth residents.

In Exeter each September, the Exeter Kiwanis Club sponsors a UFO Festival that reminds visitors of a time on a September night, 57 years ago, when aliens visited our seacoast.