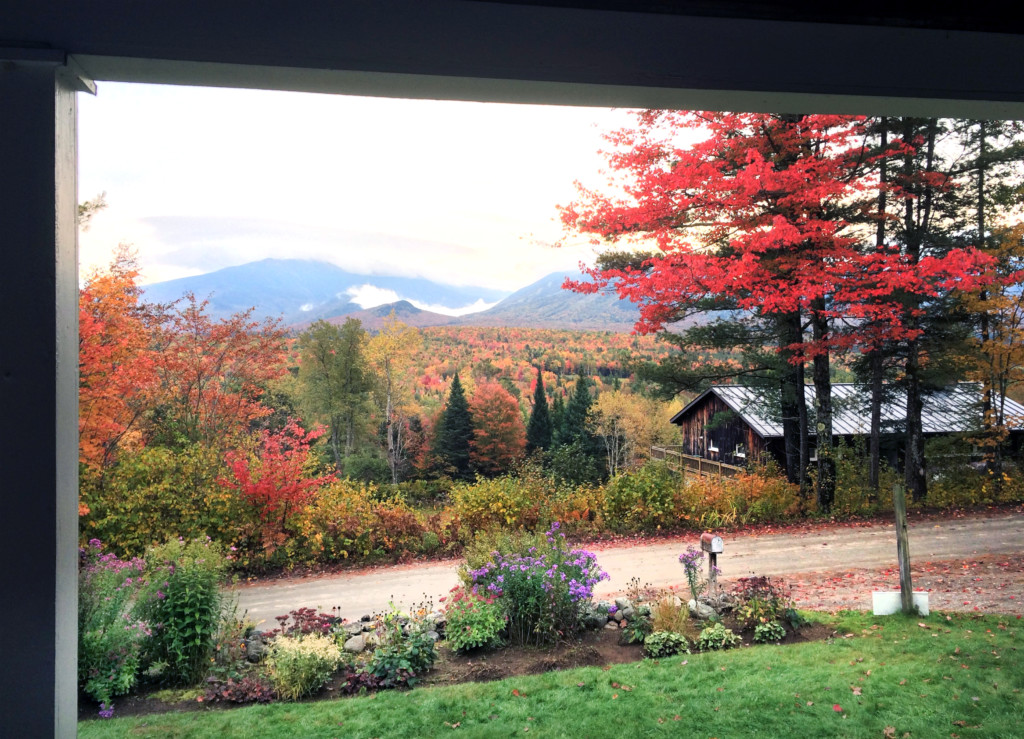 The view from the porch of The Frost Place. Photo by Meghan McCarthy McPhaul

When I say The Frost Place saved my life, it’s mostly in a figurative sense. I went to work there, at the small 19th-century Franconia farmhouse-turned-museum-and-poetry-center, a few months after becoming a mother.

Having twins had thrown much of my life into flux. I’d gone from working as a reporter at a local daily newspaper to an entirely different type of toil. I’d shifted from a professional with a somewhat flexible schedule and considerable free time to a woman who appreciated 15-minute catnaps, a few spare seconds to take a shower, and Saturday night dates with my husband, which consisted of sitting on the couch with Chinese take-out and any decent movie on TV.

I adored my babies — still do, even as they near teenagedom — but I needed a reason to get out of the house. By myself. I needed something useful to do besides change diapers and feed babies.

Although I live less than a mile up the road from The Frost Place, I’d only ever visited the former home of Robert Frost, that great American treasure, to interview a couple of resident poets for newspaper stories. I also interviewed Jim Schley, when he became the new director of The Frost Place in 2006. Jim and I developed an easy rapport, and a year later, he hired me to work as a part-time docent and the museum manager.

It was a perfect match for that time in my life.

On the summer and early fall afternoons I headed down the hill to The Frost Place, I always felt frantic as I rushed out the door, leaving two infants with one grandmother or the other. But once I arrived, calm took over. I went through the routine of unlocking the large barn door and sliding it open, turning on the lights, walking through the house to ensure all was ready for visitors — adjusting the hang of a curtain here, a sepia photograph of Frost’s young family there, admiring the poet’s slanted writing in letters kept under display case glass.

Learn More
Visit The Frost Place at 158 Ridge Rd., Franconia, and learn more about Robert Frost and his life in New Hampshire with this feature story.

Many days, it was quiet in the museum, which encompasses the small barn where Frost kept chickens and a cow (supposedly trained to be milked an noon and midnight, rather than dawn and dusk, to better suit the poet’s schedule); the farmhouse where his young family lived for five years a century ago; and a short path through the woods where several of Frost’s poems are engraved on wooden signs.

On those quiet days, I was free to wander through the rooms where the Frost family once lived. Or along the poetry path, letting the words of poems and the sounds of the woods sink in. Or simply to sit at the small desk in the barn with a book of poems and my own thoughts. Often, I wrote in my journal; a recent glimpse at those years-old entries reminded me that even away from the babies, they were always on my mind.

During busier days, I enjoyed talking with visitors. Some came to The Frost Place on a sort of pilgrimage — here to see the place where Frost perhaps penned a favorite poem in full view of the mountains of the Franconia Range. Others remembered him mainly from his recitiation of “The Gift Outright” at John F. Kennedy’s inauguration, when Frost was quite an old man, far removed from his Franconia days. A few simply saw the unassuming “Frost Place” sign pointing from one backroad to another and came along to check the place out. 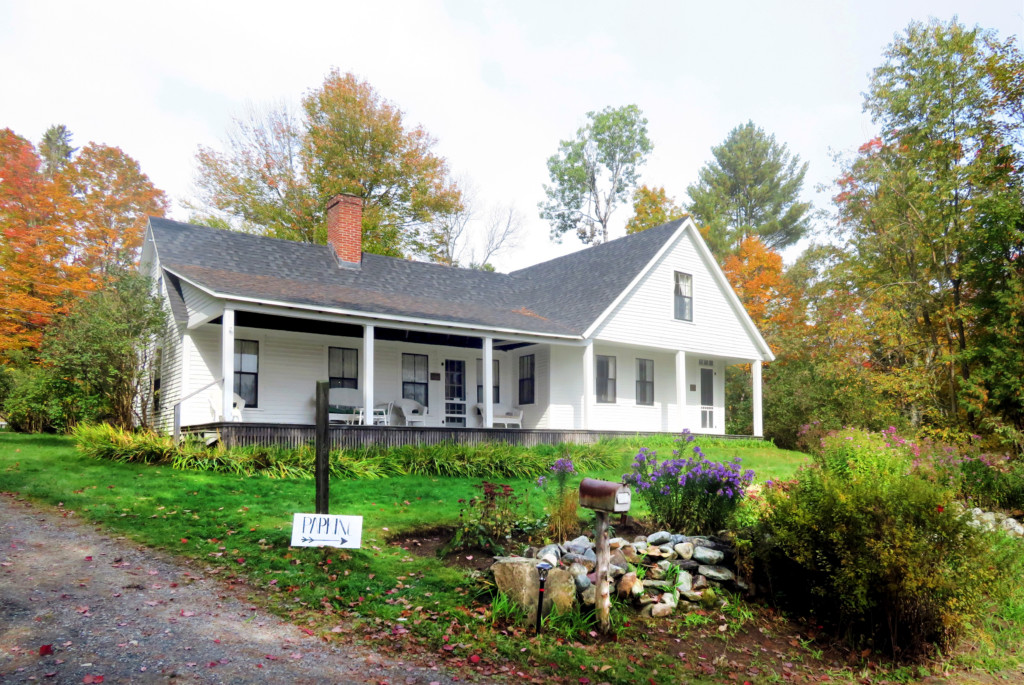 Robert Frost and his family lived in Franconia for five years. Today, you can visit the home, barn and poetry trails at The Frost Place. Photo by Meghan McCarthy McPhaul

Frost was known for his long walks through the countryside — whether here in Franconia, or in Vermont, or England — during which he would do what he called “botanizing,” picking out trees and flowers and birdsong from the landscape. There is a small, wild meadow between the barn and the poetry trail at The Frost Place, and I would often borrow a field guide from the small museum shop and work at identifying some unfamiliar flower or bug or tree.

The meadow included myriad stalks of milkweed, and as the summer carried from the bright days of June toward languid August afternoons, I started spotting yellow-white-and-black-striped monarch caterpillars there. Eventually, some of those caterpillars hung their chrysalises from milkweed stems or the clapboards of the old house. A monarch chrysalis is like a jewel — at first jade green with gold specks in a neat ring around the top, then darkening to sheer black and orange as the butterfly prepares to emerge.

Watching that gradual transformation over days and weeks was a gift of equipoise and expectation.

Another gift was the poetry reading Jim organized one summer afternoon, when he somehow coerced three of New England’s greatest contemporary poets to come together here — in the small barn where Frost once milked a cow and gathered hens’ eggs — to read their own poetry.

Galway Kinnell came from his home in Vermont, Maxine Kumin traveled north from Warner, and Donald Hall arrived from Wilmot. All three were in their 80s then. Hall was finishing his one-year term as US poet laureate. Kinnell and Kumin were Pulitzer Prize winners.

I don’t remember what poems the poets read that afternoon, but I remember the feeling of the day. How the barn filled with people and we set up more folding chairs outside, on the uneven lawn that sloped down toward the road. How the poets’ voices filled the quiet space with something akin to music. How I was surrounded by people who chose to spend their afternoon listening to spoken words in artful arrangement.

Later, after the crowd had dispersed and the poets gone, I traveled back up the dirt road toward home and motherhood and “Goodnight Moon” — a different kind of poetry.