Some trespasses require no forgiveness 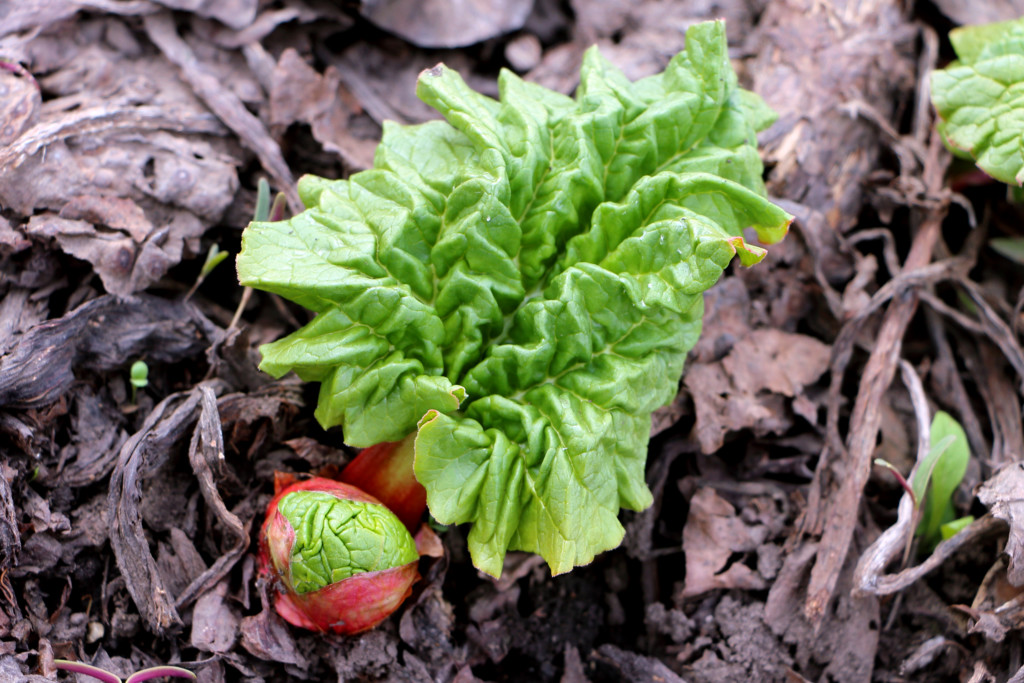 It was a cold day in early April and almost dark when I set out to rescue the rhubarb.

I was trespassing, with my shovel and bushel basket, on what had been, until just a few months before, my family farm. My brother Will, 65 years old, in debt, in pain and discouraged, had sold the land that had sustained our family on Dover Point since the 1630s. Will, our sister Lucy and I were to be the last of 11 generations to work the soil that was the Tuttle Farm, the oldest continuing family farm in America.

Heartbroken as I was, still I was glad that the buyer was another farmer, one who could bring new energy and ambition (not to mention new capital) into cultivating the land, and who would revitalize the famous farmstand my parents had opened in 1956.

It was deep winter when the new owner took possession. The Oven Field was covered with snow. So were the Gilman Field, the 300 Field and the lower pasture near where the barn used to be. In that lower pasture was the rhubarb, 10 rows of it, lying dormant under its snowy winter blanket. For at least a century, those same rhubarb roots had, year after year, survived the New Hampshire winters and pushed their new spring shoots up through the frosty April soil, unfurling wrinkled green leaves as their tender red stalks grew longer and thicker. By mid-May, decade after decade, there had been a reliable crop of rhubarb for the generations of my family to pull, trim, wipe with a rag, and sell to our eager customers.

About every five years or so, when the rhubarb patch got too weedy and the stalks too thin from competition, the underground crowns would have to be dug up, divided, and moved to a new field. This would be done in the early spring, just as the season’s new growth was emerging.

First, the new field would be plowed and harrowed smooth, then lines drawn in the soft soil to keep the rows straight. The big gnarly crowns, with their long roots and just-awakened buds, were split into pieces with a spade, then each piece dropped into a hole and covered with soil. Then the aisles between the new rows would be mulched with straw, and the original line would continue, in a different place, more bountifully than before.

Rhubarb is such a wonderfully early crop, arriving on the heels of a long New Hampshire winter. When I was growing up in the 1950s and ’60s, there wasn’t much fresh food to be found out of season, and what there was was of poor quality (said my father) and too expensive. After months of canned and frozen food, it was a treat for me to run across the pasture, where there might still be a few lingering patches of snow in the shady spots, and then down the farm road to see if the rhubarb was up. If it was, I could pull a short red stalk and bite the tender end, puckering up with delight from the tart springtime freshness of it. When the rhubarb was big enough to sell, we’d open the farmstand for the season.

The stalks of our rhubarb were such an unusually bright, deep red that when they were cooked, the resulting sauce (slightly sweetened and still warm, delicious on vanilla ice cream) was a bright, almost neon, pink. Customers and other farmers would often ask what the variety was, but none of us could say.

There was no one still living who knew the answer. Who had planted those first crowns so long ago? My brother Will didn’t know, nor did my father, or my grandfather. It could have been my great-great-granduncle William, the white-bearded Quaker I knew only from a few ancient photographs in the farmhouse where my grandparents had lived.

It would be a good guess; Uncle William, who had died in 1911, well into his 80s, was the one who had, just after the Civil War, built the first greenhouse on the farm. He had sold boxes of petunia plants for passersby to take home and transplant into their gardens. He had grown and sold the first tomatoes (they were then widely thought to be poisonous, but he disagreed). It was Uncle William who had taught his favorite grand-nephew, my grandfather Penn Tuttle, the history of our family on that piece of fertile land between two tidal rivers on the New Hampshire seacoast. 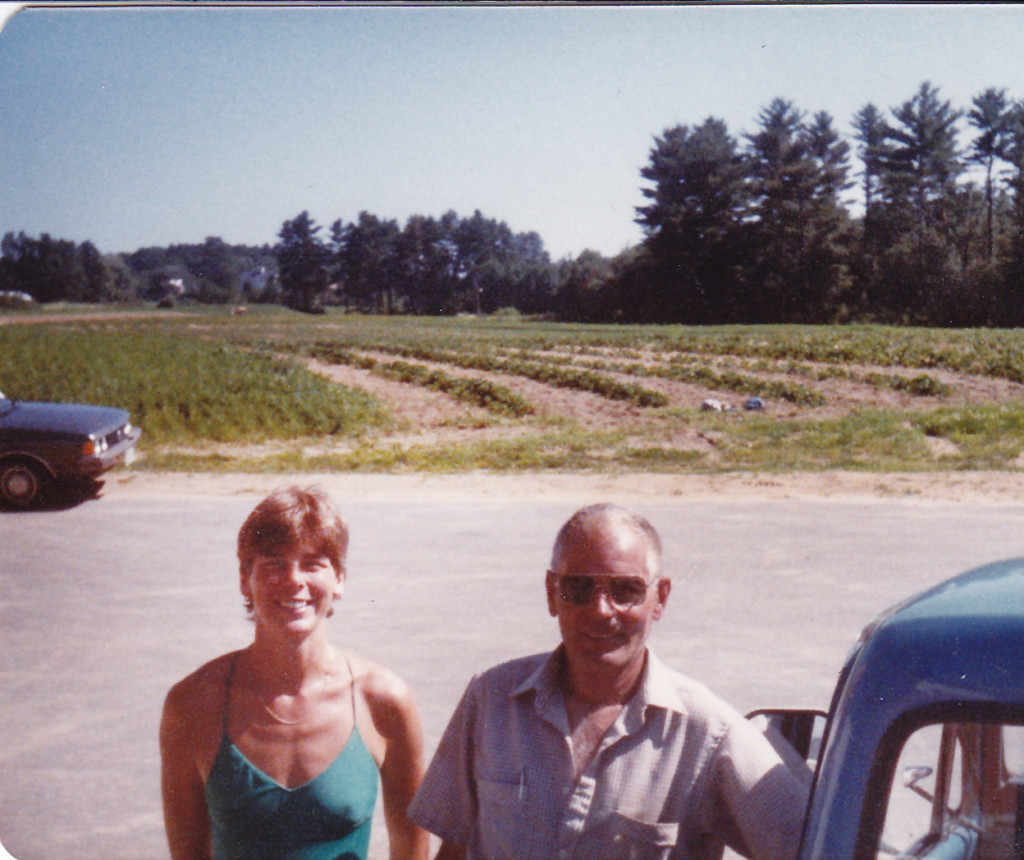 The author, Rebecca Tuttle, poses with her dad for a photo in front of the fields near Tuttle’s Red Barn circa 1980.

We were direct descendants of John Tuttle, who had sailed from England in 1635 with a King’s land grant for 20 acres in the settlement of what would become Dover, New Hampshire. The succeeding generations of Tuttles, for well over three centuries, had continued to live on and cultivate that land, gradually adding acreage to the original grant. They survived wars and diseases, massacres, failed crops and hurricanes. No doubt they also experienced love and joy and pride in their work and in their sons and daughters and grandchildren. Over the centuries they built a log cabin, and then a four-square Colonial house. They put up a barn to shelter their livestock and store their hay.

They were founding members of a Quaker meeting house and a one-room school. They cut ice from a nearby pond, and built an ice-house in which to store it. They built a sawmill and made their own bricks on the riverbank. And one of those Tuttles, one spring day long forgotten, planted a few crowns of rhubarb.

When my brother was giving the new owner a tour of the farm late that fall, he proudly showed him the rhubarb patch and related what he knew of its history. Soon the papers were signed, the check written, the agreement final. The farm, the famous farmstand, and the four-square Colonial house our ancestors had built now belonged to someone else.

On that cold April day some months after the farm had been sold, my brother called me with some bad news: the entire rhubarb field had been plowed and harrowed under. Worse, it had been sprayed with Roundup, the broad-spectrum herbicide that kills every living plant it touches. Whether it was a mistake by the new owner or deliberate, the news gutted me. Somehow it was easier for me to accept the loss of the farm than the loss of the rhubarb. Or maybe the loss of the rhubarb was something more tangible; something I could fathom. Something not so enormous and overwhelming. And maybe, unlike with the more monumental loss, there was something I could do about it.

Late that afternoon I pulled on my boots and warm coat and gloves. I grabbed a shovel and a basket and tentatively stepped onto what was now someone else’s land. When I got to where the rhubarb had been, I dug and dug, with no luck. The pieces I found were too small, too damaged, to save. I moved to the outer edges of the field, where I thought the tractor could have missed a plant or two. Just under the surface I found a few partial crowns, sliced by the harrow but evidently missed by the plow, with a few bruised roots still attached. There would be no way to know if they would live through their dousing with Roundup until I planted them somewhere else. I filled the basket with the few wounded survivors, wiping away tears with a muddy glove. I knew where I would take them.

With the closing of our farmstand a year before the land was sold, my sister and I had needed new jobs. The two of us went to Riverside Farm, just over the border in Maine. We asked the owner, our cousin Dave Tuttle, if he could use a couple of strong and willing farm girls, even if we were, like him, nearing retirement age. He said yes, and we began to take root there. Dave’s father and our grandfather had been brothers, both farmers. Dave had his own fond memories of the Dover Point farm and, like us, had mourned its loss.

When I explained to Dave what had happened to our rhubarb, he agreed immediately to try to help save it. He prepared a new spot for the torn and battered crowns and planted them in a separate row, alongside his own rhubarb. We were both skeptical; Roundup is strong stuff and we didn’t want to get our hopes up.

On a warm day in May, a few weeks after he had planted the crowns, Dave came into his greenhouse where I was busy transplanting tomato seedlings. “Come look at this!” he said with an excited grin. I climbed into his muddy pick-up and off we went across his fields to the rhubarb patch. And there they were: the first wrinkled green leaves just beginning to emerge from the soil.

During its long life on Dover Point, that original rhubarb had survived its own catastrophes: droughts and floods, botrytis, stem borers, spider mites and hungry deer. Not even Roundup and that merciless steel harrow could kill it. Not all of it.

One spring day a few years from now, it’ll be time to dig those Tuttle crowns at Riverside Farm and separate them yet again, increasing their number. A new generation. Cousin Dave’s grandkids and mine will know the story. The rhubarb is home.