We may not live in hobbit holes here in New Hampshire, but looking back from the Dark Kingdom of Los Angeles, our state is a great place to begin an adventure, and the perfect place to return to when the going gets rough.

It’s a tale as old as Tolkien: A curious youngster, partly feeling a duty but mostly dreaming of adventure, chooses to leave the peaceful, verdant New Hampshire and travel a road going ever on, over rock and under tree, across the land and to the heart of Mordor (also known as Los Angeles).

I am not the first Hobbit to have left the ’Shire, and the stories of legendary Hobbits before me have been guiding lights. “The Hobbit” is the first story I can remember knowing; I still have the battered copy my parents read to us over and over. As soon as I was strong enough to hold it, “The Lord of the Rings” expanded my love. How could a girl from green, bucolic New Hampshire not feel kinship with Hobbits? And like every Hobbit before me, my ’Shire roots have been what let me grow.

Whether it’s your gardener or a party of dwarves, good company is of utmost importance on a Hobbit’s journey. My inseparable partner across Middle (American) Earth was a small green car named Frodo, who even lost a front left hubcap along the way like his nine-fingered namesake. Sadly, also like his namesake, I found myself mourning the loss of a beloved Old Man in a Mountain soon after leaving home. Decades of family drives from Concord (where we lived) to Berlin (where we began) and back again made the Old Man a devastating anchor to lose. 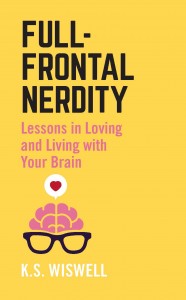 After leaving the ’Shire, K.S. (Kate) Wiswell went to Harvard to become a cryptographer and came out with a degree in English literature. Along the way, she studied physics, statistics, philosophy,
mythology and marching band. After three years in the corporate world, she joined the Second City comedy troupe because “improv is cheaper than therapy.” Her new book, “Full-Frontal Nerdity,” is $12.99 from Kaplan Publishing and is available everywhere books are sold.

Maintaining civility outside of the ’Shire is also a must, and civility starts with food: Prioritize it, savor it and share it with others. It has been my pleasure to introduce many Californians to the finer foods in life, from fluffernutters and whoopie pies to poutine, tourtière and a quality lobstah roll. You can bet my friends know who has the good maple syrup for second breakfast. In addition to meals, civility requires we always remember our manners, which is why I frequently hear the names of fellow ’Shire-folks— Sandler, Silverman, Meyers, O’Malley — the latter listed among the nicest people in Hollywood.

The ’Shire may be a relatively small place that is a bit out of the way, but it offers a Hobbit everything they need in the wild. Much like Bilbo’s love of wordplay gave him the exact right skills to survive riddling with Gollum, my random New Hampshire knowledge has fortified a nerdy reputation. Things like every Robert Frost poem, or literally anything about our 14th president, or the real name of Golden Pond and that national elections start in Dixville Notch. Not only do I know and love hockey, but thanks to teen years spent cheering for Tara Mounsey, I can also give you a history of our US Women’s Olympic Hockey Team (read more about Mounsey in the feature starting on page 52). And our Olympic ski teams — thank you, Bode Miller.

Really, though, the gift that drives ’Shire folk to succeed is the respect for creativity and innovation fostered by those who’ve gone before. From Archie to “Our Town” to Irving, our artists intrigue; from the Coach to the Cog to the Segway, our inventors impress; and from space flight to statesmen to sports, our heroes inspire. How could a Hobbit not be emboldened to strive with such great fellowship behind her? Should success come, the source is the simple, straightforward values of the ’Shire.

Their very nature as Hobbits is why Bilbo, Frodo and Sam remain uncorrupted by the One Ring, and why (I hope) I can say the same in the face of an often soul-crushing world. Our ’Shire values keep us grounded, and a big value is the belief that everyone and everything has value. Every experience brings something to learn; every person has something to teach. It is a belief I have tried to embody in my travels, and it has rewarded me with countless fascinating excursions down less-traveled roads.

The most influential teachers in my life have come from home, including my schoolteachers, because of what they taught me beyond the curriculum. At Rumford Elementary, Mrs. Blodgett taught me theatre can happen anywhere, including a coatroom. Mrs. Sutton introduced us to Krypto, and by equating math with fun changed me forever. Mr. McKoan pushed me to ride my first roller coaster, and in doing so taught me the exhilaration that can come from facing a fear. In high school, Mr. Morrison taught us that spelling matters — even in history class — but more importantly, demonstrated exuberance. Mrs. Hoadley exuded a spirit of playfulness and humor that has stuck with me for decades, and Mr. Kelly showed us all how to wear our geek passions with pride (especially if it’s the Marx Brothers). There were less enjoyable lessons as well, like adults could be childish, or cowardly or careless, and that everyone has times when they are simply wrong.

I am grateful to every teacher I had at Rumford, Rundlett, Concord High and beyond, and to the peers who taught me so much by surviving beside me. But perhaps the person who gave me the greatest lessons for living my best Hobbit life (besides my parents), whose impact has stayed longest and reached farthest, was Van McLeod, our longtime commissioner of cultural resources who died in 2016.

By no means am I the only person who might say this — there are unknown numbers of us better off for having known him — but in many ways, he was this Hobbit’s Gandalf.

As director of the Concord Children’s Theatre Company when I was growing up, Van prodded me out of the comfort of my imagination and into adventure. Not only did he give me the opportunity to actually be in a production of “The Hobbit” when I was 12, he taught us all the vital importance of humility and play. Those productions are where I first learned to improvise, a skill that has been invaluable beyond theatre, in teaching, writing, and existing. They are where I started to figure out how to share my imagination with the world. Later, as an intern at Van’s North Country Center for the Arts and in his Department of Cultural Resources, I learned how to hone that creativity in a professional way.

Eventually I set out from the ’Shire, but no matter where I went, Van was there with advice and encouragement in the most trying times. And whether I was looking for my next story idea, contemplating steps in my career or simply feeling out of sorts with the world, one refrain was constant: Bring it back to New Hampshire.

The road goes ever, ever on down from the door where it began. I don’t know when these feet that wandering have gone will turn at last to home … but I know that home will always be the ’Shire, and that, as Tolkien himself said, “as long as the Shire lies behind … I shall find wandering more bearable.” The gifts that have been given to me by the history, people and values of New Hampshire will be the foundation of my success. After all, what could be a stronger foundation than granite?