When in Lebanon, head to Muriel’s Donuts 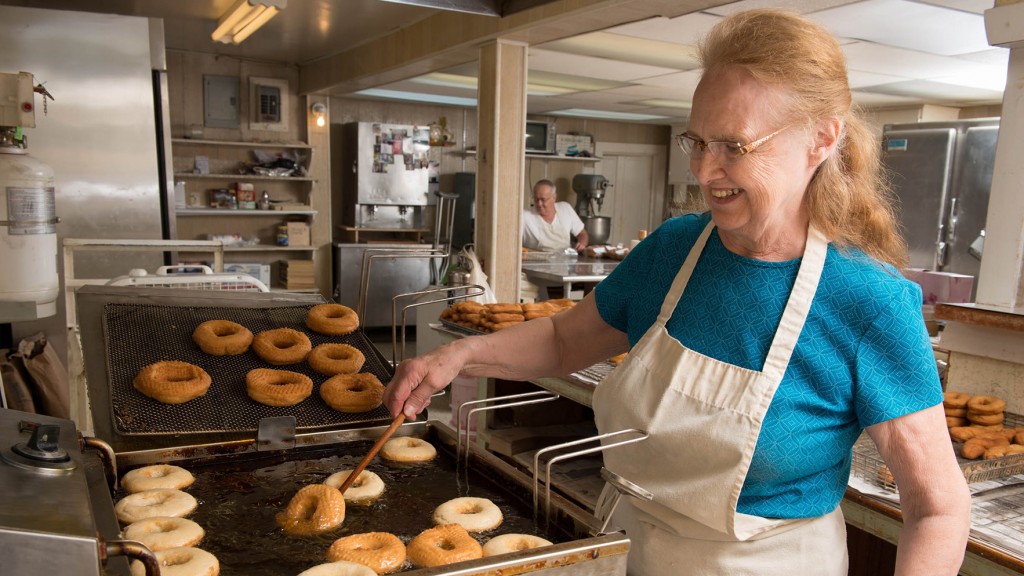 What is it about the New Englander’s connection with the donut? Could it be that the powerhouse food has enough carbohydrates to get a farmer through a harvest day or help a hiker reach a mountain peak?

Or perhaps this ultimate comfort food gives Yankees a feeling of fullness on an empty winter day. Or maybe the New Englander’s affinity is with the pastry’s shape, the torus, which is as cyclical and mystical as the change of seasons.

Whatever the reason, in our region, the donut constitutes its own food group. It makes sensible square meals a little rounder. It is a sweet break from a hardscrabble life. And it’s thrifty, too. For well under a dollar, frugal New Englanders can still hold this little piece of heaven in their bellies.

Nowadays, America may run on Dunkin’, but for decades, even centuries, dating back to when Dutch settlers purportedly introduced the treat to the US, New England had small corner donut shops where the only marketing was word-of-mouth advertising and a hand-painted sign above a window. At such places, neighbors congregated to catch up on each other; they also knew the very person who molded the donut into its sacred shape and baptized it in the vat of lard. At these establishments, customers would be able to justify their indulgences, knowing they’d at least made a healthy stroll to the shop, after all – but they wouldn’t even be thinking in such terms in those times of simpler pleasures.

Can’t make it to Muriel’s? Check out these other donut spots next time a craving hits.

Brother’s Donuts & Deli Shop is so popular it often sells out of its signature sweet treat. (426 Central St., Franklin)

For a twist on a favorite, check out Donut Love‘s potato donut. (Lafayette Rd., Portsmouth)

At White Mountain Cider Co., the cider donuts are made in-store. (Rte. 302, Glen)

Commercialization and gentrification have wiped out the old donut shops, replacing them with drive-thru windows and artsy coffee shops, but in one New Hampshire spot time apparently stands still.

If, for some reason, you find yourself wandering in Lebanon, beyond the village green, up past the Catholic church and on to West Street, you’ll pass a multi-family building with a curious blue-and-red sign propped up in the window: Muriel’s Donuts. You pause because it doesn’t resemble a business of any kind. But an undeniable aroma of sugar and grease issues a siren call from the bottom story, and you step inside.

Behind the service window stands Muriel, an aproned 74-year-old woman with a cloud of fading red hair. In the background is a butcher’s table with a rolling pin and scraps of dough. Muriel cheerfully asks how she can help you. Puzzled, you ask how long she’s been here: “Oh, about 40 years,” she replies.

Muriel and Francis Maville opened shop in 1967. Through the years, as they raised five sons, the couple woke early to make the donuts, selling to the customers who stopped by, boxing up their wares and making deliveries to shops, truck stops and grocery stores. Some of those places have come and gone over the years, but the customers themselves never leave. 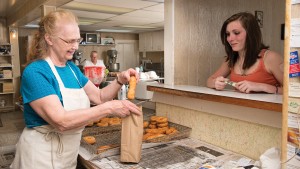 “If you’ve lived in Lebanon, you’ve had my donuts, and if you can still eat them, you do,” Muriel says. “The whole neighborhood smells ’em, so they come in.”

Spend a day at Muriel’s donut shop and you’ll see groups of schoolgirls gather their pennies for a snack, or an elderly gentleman waiting outside in the car while his wife returns with a brown bag full of warm sinkers.

“It’s just a variety of people,” Muriel says of her clientele. “A lot of the older people, they’ve lived on ’em, they bring their kids, and they’re my next generation who are now bringing in their kids. So I can see three generations of the customers here over the years.”

Once you taste Muriel’s donuts, you’ll understand their staying power. Whether you get the plain, the sugar, the cinnamon, the cruller or the jelly stick, you’ll delight in a crisp, almost crunchy exterior that gives way to a melt-in-your-mouth interior of sweetness and spice.

It’s a taste Lebanon residents can’t seem to live without. The Mavilles closed the shop briefly in 2007 when Francis began having health problems. “Boy, did I hear about it,” Muriel says. With Francis’ declining health, Muriel now runs the shop on her own. Although she doesn’t look as if she’ll slow down anytime soon, she realizes retirement is inevitable. But “true” donut lovers can rest easy: the Mavilles’ sons plan to keep the shop running to ensure that this New Hampshire city will always have something comforting and sweet to dip into life’s cup of bitter black coffee.