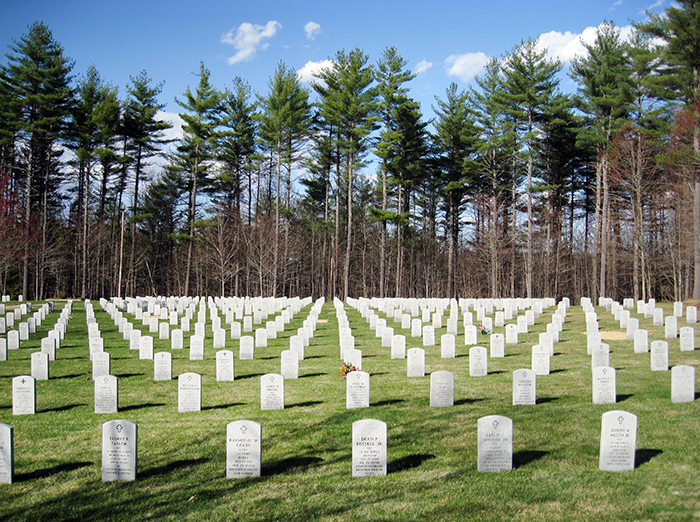 Since breaking ground in 1997, The NH State Veterans Cemetery in Boscawen has become the final resting place for thousands. photo by Marshall Hudson

At the New Hampshire State Veterans Cemetery in Boscawen, the headstones line up left to right and back and forth by rank and file with such precision that even on the diagonals they perfectly align. The neat and orderly effect is both calming and stunning at the same time. The tranquil setting situated on a wooded bluff overlooking the Merrimack River conveys a natural beauty that makes it an ideal dignified and special place for a veterans cemetery.

The idea of creating a memorial cemetery for New Hampshire veterans was conceived in the mid-1980s. At that time, there were 114 national cemeteries operated by the Veterans Administration, but due to space constraints, 55 of them were closed except for cremations or for the spouses of a veteran already interred within the cemetery. There were still some 179,000 gravesites available nationwide, but there were also an estimated 27 million veterans qualifying for burial in a national cemetery and, of those, nearly 8 million were over the age of 70. The foreseeable demand was huge, and the national cemeteries were running out of room. To address the looming shortage of gravesites, the Department of Veterans Affairs began an ambitious program of developing new cemeteries.

In 1993, the VA began providing grant money to the states to help finance the development of state-owned and operated veteran cemeteries. At that time, New Hampshire did not have a veterans cemetery, and the nearest national cemetery accepting New Hampshire veterans was located on Cape Cod. While other states in the Northeast did have veterans cemeteries, many had a state residency requirement that precluded New Hampshire residents from being interred there. With an estimated population of 146,000 veterans in New Hampshire, there was a clear need to develop a quality location to bury our deceased veterans with dignity and honor.

A search committee formed under Gov. Judd Gregg was tasked with finding a suitable site on which to develop a New Hampshire veterans cemetery. The committee began looking at existing state-owned lands in the hopes of finding an appropriate parcel without any acquisition costs. Criteria included a dignified, peaceful location within close proximity of major veteran populations, and it also needed to be near primary road networks. Lands evaluated included locations at Bear Brook State Park in Allenstown, Annett State Forest in Rindge, and Pease Air Force Base on the Seacoast.

Memorial Day and 100 Nights of Remembrance
Services are held at 11 a.m. on the traditional Memorial Day date of May 30
New Hampshire State Veterans Cemetery
110 Daniel Webster Hwy., Boscawen
This begins 100 Nights of Remembrance, when a bugler will sound taps every evening, rain or shine, at 7 p.m., through September 11. After the 100 consecutive nights have ended, taps are then sounded only once a week on Sunday afternoon at 1 p.m., rain, shine, or snow, until the opening ceremony again on the following Memorial Day.

In 1994, a parcel in Boscawen was identified, which was then held by the NH Division of Forest and Lands for use as a state forest. Gov. Stephen Merrill approved the transfer of 104 acres at the Merrimack River State Forest over to the NH Veterans Home. Merrill also signed a bill into law that established a State Veterans Cemetery and made an appropriation therefor. Donations and a mix and match of state and federal funds were earmarked for cemetery design and construction, and the transformation of rural woodlands into a cemetery was begun. The next few years were spent pursuing designs, permits, funding, site engineering, and executing the contracts necessary to launch construction of the first phase of the project.

Official groundbreaking ceremonies took place in May of 1997, and a few months later in September, the New Hampshire State Veterans Cemetery was officially dedicated at a ceremony presided over by Gov. Jeanne Shaheen. Two months later on November 18, 1997, WWI and WWII Navy veteran, Ernest Holm, was the first interment at the new cemetery.

As of January 1, 2019, there have been a total of 11,200 interments: 8,321 veterans and 2,879 non-veteran spouses. This includes 13 who made the ultimate sacrifice and were killed in action, and 37 who were once held as a prisoner of war. There are at least 205 interred veterans who served in multiple branches of the armed services, and 875 who served in multiple wars or conflicts.

An expansion project currently underway will add another 1,410 pre-placed crypts for future full-casket burials and create 1,862 designated locations for the burial of in-ground cremains. The project will also expand upon the existing road network and prepare an area that will provide for the placement of six additional columbaria at a future date. This expansion project is on target for completion in July of 2019. As need arises and at dates to be determined by demand, additional expansion in planned phases are prepared for with an overall master plan. With these future phases, the cemetery has enough acreage and design to accommodate veterans and their eligible dependents for many years to come.

Five full-time and two part-time grounds-crew personnel, augmented by volunteers, mow the grass, trim around the headstones, seed, rake, open and close graves, erect headstones, clean the chapel between services, plow snow, handle maintenance on the buildings, and do whatever else needs to be done. To show respect for the veteran being interred, grounds work is scheduled so that the personnel work on the opposite side of the cemetery whenever an interment service is taking place. When taps are sounded, they shut down lawnmowers, leaf blowers, and backhoes and stand with their hands over their hearts until the final note fades away. Two full-time administrators, an interment coordinator, and the cemetery director make up the rest of the staff that keeps the operation functioning smoothly as they routinely schedule four or more services a day, five days a week.

In late May, preparations for Memorial Day include staff and volunteers tackling the task of placing an American flag at every headstone. Volunteers are instructed how to utilize a unique measuring device that precisely establishes a uniform height and location for each flag. Memorial Day services this year will be organized and hosted by the NH American Legion and will be held on the traditional Memorial Day date of May 30, starting promptly at 11 a.m. Memorial Day is also the kickoff day for the start of “100 Nights of Remembrance,” when a bugler will sound taps every evening, rain or shine, at 7 p.m., through September 11. After the 100 consecutive nights have ended, taps are then sounded only once a week on Sunday afternoon at 1 p.m., rain, shine, or snow, until the opening ceremony again on the following Memorial Day. So that they are never forgotten, 100 Nights of Remembrance is dedicated to honoring and paying respect to those who have served our country in the armed services. The public is welcome to attend these solemn ceremonies.

If you visit the cemetery for the Memorial Day service or to observe any of the 100 Nights of Remembrance sundown taps ceremonies, be sure to take a few moments and wander the cemetery grounds. Observe the alignment of the rows of headstones, and take a few moments to acknowledge the service and sacrifice of the veterans buried beneath them.

Categories: Things to Do, What Do You Know