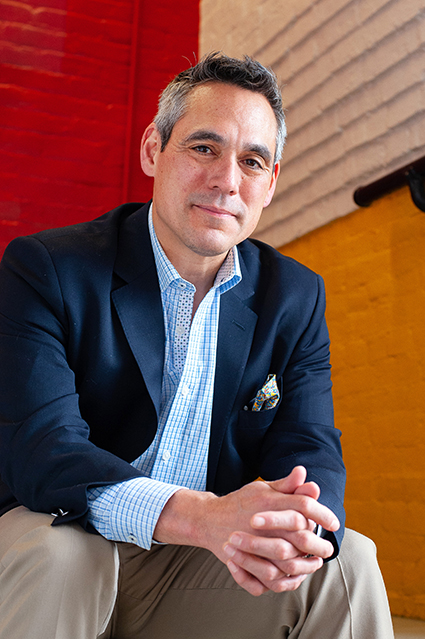 Well, the wheel has turned again, and here I am. It’s good to be back. I’ve missed you folks. Although I’ve popped in and out of the pages of New Hampshire Magazine as a contributor or source a few times in the intervening years, it’s been more than a decade since I occupied a desk at the McLean Communications offices in the Manchester Millyard.

The almost-numinous synchronicity about that is former publisher Sharron McCarthy, McLean’s beloved leader of more than 20 years, is one of the three people who interviewed me for that first job.

In December, she left McLean to become the CEO of Girls Inc. of New Hampshire.

It is from her former chair here at McLean, figuratively and literally, that I’m writing this column. I’m deeply grateful to her for believing in that callow 29-year-old newspaper editor/budding web developer, and for her mentorship and friendship as two decades sped by, underscored by unfathomably massive changes in digital technology that have reshaped not only the publishing business but all of human life.

A nerdy example of the scope that change: One of my initial challenges back in 1999 was to code the company’s websites, all flat HTML files at the time (if that means anything to anybody in the age of WordPress and Squarespace), and eventually redesign and migrate them into early content management systems. In some cases, it was my job to cajole, coax and explain to remaining skeptics why media companies ought to have websites at all.

Looking forward from the technologically quaint year of 1999:

Back in those early days, the internet was still green enough that perhaps a majority of businesses didn’t have websites, and we ran a gala awards event called the New Hampshire Internet Awards to honor those businesses that had made the leap and had the most standout designs. Imagine that.

Throughout the decades since, I’ve had the great fortune to labor at the nexus of technology and publishing for a number of excellent media companies, working with many talented people to figure out how traditional media fits inside this exponentially rapidly evolving landscape of devices, connectivity, social media, digital advertising, video and audio technology, and human culture.

But I’m not back at McLean as a technologist this time around, although I plan to bring that experience to bear on McLean’s digital initiatives and enlist the very talented team here in some strategic new digital hijinks. As publisher, I’m responsible for creating and supporting a space where the team can bring their amazing passion and creative prowess to bear on all of our products: print magazines and newspapers, which I still believe have an important future, custom publishing, live events like the Best of NH and BOBs, and, of course, growing digital products such as our email newsletters, websites and more.

Which leads me to something that hasn’t changed in the face of all of this technological upheaval. At the heart of this whole business is connection: connecting people to each other, to place and to story. That’s something McLean has always done brilliantly, largely because of the culture inside the company, which has been from my earliest memories of it back in 1999, one of support, respect, unbridled creativity, fun and an exuberant passion for excellence. In the early days, when the New Hampshire Magazine offices were below Main Street in Nashua, Sharron and New Hampshire Magazine Editor Rick Broussard (how he could hold forth with comic erudition and self-deprecating Southern charm as master of ceremonies at an office party is the stuff of legend) helped form a baseline template in my mind of what great, cool, creative magazine culture was. I’m deeply moved to have the opportunity to make my own contribution to that now.

Adding further to the appeal and potency of that culture, family-owned Yankee Publishing Inc. (Yankee Magazine, The Old Farmer’s Almanac and now Family Tree Magazine) bought McLean Communications seven years ago, bringing McLean under the umbrella of its own rich and storied heritage and worldwide brand recognition.

On my second day on the job this time around, I had the opportunity to attend New Hampshire HOME magazine’s Design Awards event. I was asked to thank our sponsors and make a few remarks to the room full of architects and designers. These felt as though they wrote themselves: “It feels truly fitting the Home Design Awards would be my first event back at McLean, because I have always associated this company with the highest standards of design. And because it feels so much like coming home.”