It’s a small food world after all

I moved to New Hampshire from the San Francisco Bay Area in my mid-20s in 1998. Having grown up in such an intense melting pot, I had a love for multiculturalism in food, festivals and friends. I grew up eating Bengali dishes in an epicenter for Indian activity, and chorizo and eggs served up by the best of Mexican mothers. Landing in the Merrymeeting side of Alton was a bit of culture shock for a dude who still used the word “hella.” The state had mostly white-washed facsimiles of almost-ethnic eateries limited to a few misappropriated cuisines. Thankfully, we live in a very different state these days.

In planning this article, I crowdsourced on social media and several spots got multiple shout-outs from my friends and friendly foes on Facebook, and it is those I will be sharing with you in this piece. All offer authentically non-American food and thoughtful beverages, all within easy reach, right here in New Hampshire. And have no fear; while I take a cuisine-centric approach to this edition of SIPS, I include suggestions for drinks that will enhance your experience in each spot. 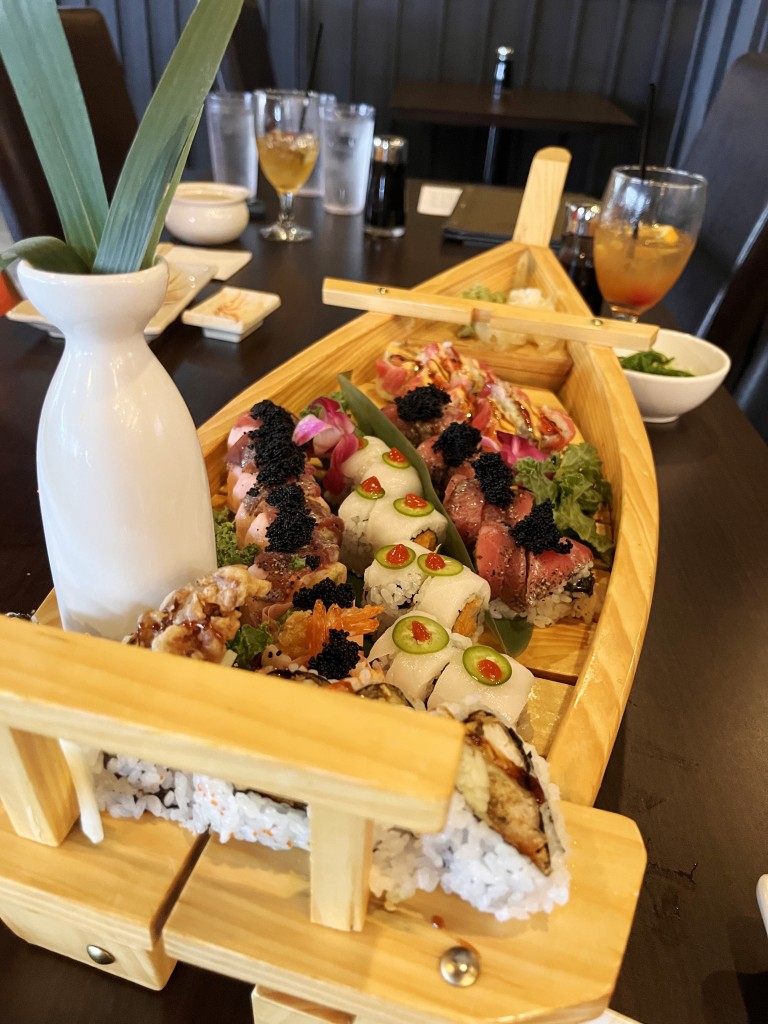 Dry-docked but not stranded at Kisaki on Elm Street

We started out at Kisaki on Elm Street in Manchester. I say we, because I always drag some poor fool along with me when I do restaurant reconnaissance — this time it was my man Fab 5 Freddie and my wife Charlene. Ordering too much sushi is sort of a tradition with this trio, but Fred had not yet tried Kisaki. I learned they were doing an extensive remodel when I showed up a few months ago to meet a business partner, only to find they were closed. Tears were shed that day, but fear not, we carried on. The new configuration was much more spacious, eliminating a U-shaped middle bar in favor of a long, thin bar along one wall. This created space for eight more tables, and the three of us were seated at one of them.

The décor is fairly minimalist, in keeping with custom but not barren. Warm tones interrupt the gray base in places, and splashes of color draw the eye here and there. The back bar featured clean shelves of orderly booze with mood-appropriate lighting for a Sunday afternoon, and there was some kind of sportsball muted on a TV mounted to the side. Conversation in the room was chill but not subdued, and on occasion we heard folks laughing with their friends over some unheard joke.

Kisaki is a frequent stop for my wife and I after weekend morning activities, like eating and drinking elsewhere, and we usually get Singapore Slings. If you don’t know this cocktail, it originated in the Long Bar at the Raffles Hotel in Singapore in the early 1900s. It includes gin, Benedictine, Cherry Heering, pineapple, lime, bitters and club soda, and it is a gin drink for folks that don’t like gin drinks (or do). But today, we opted for Mai Tais and Hurricanes. I am somewhat of a Trader Vic purist when it comes to the Mai Tai, and despite this one being served with fruit, it was really close to the original blueprint. The key ingredient is orgeat, or almond syrup, which they included. Amaretto works in a pinch, but not perfectly.

For openers, we had a seaweed salad, fried pork gyoza and steamed shrimp shumai. Gyoza is like a dumpling with a thinner wrapper and finer-chopped contents, and shumai is an even thinner-skinned dumpling, which is often served steamed to preserve the delicate texture. These are appetizers I have had hundreds of times in dozens of places, and these were perfect. The gyoza had a toothsome crispness on one side, giving a nice textural variety and acting like grip-tape for my mid-level chopstick skills. The shrimp shumai were tender and cleanly oceanic, with a sweet finish. And then we saw the sushi boat sailing in.

I guess when you order six rolls, they are somehow obligated to put it on a boat, for the sake of space if not pro forma. So a ship was on the horizon. She was yar, of white pine with a honey glaze and brass hardware. She had no means of visible propulsion, if one ignored the waiter who was hiding behind the foliage and florets of fishy love bespangling her deck, and she moved with the grace of a watercolor Koi. She came to port upon my table, and I realized with a sigh that I would not have to eat again until at least the following day.

I have never had bad sushi here, let alone mediocre sushi or even good sushi — every time I have eaten here, it has been stellar. This time was no exception. We did the obligatory (for me, anyway) spider roll of flash-fried soft shell crab in rice and seaweed — you either love it or hate it, and it is on my favorites list. Sakura roll followed that, which is a roll of tempura shrimp and black pepper tuna. The contrast of the crisp and savory tempura contrasting with the pepper punch and buttery mouthfeel of the tuna is a beautiful study in balanced contrasts, and strikes me as quintessentially Japanese. The Snow White roll is unlike anything I have had elsewhere. It features rice with white tuna, topped with wafer-thin slices of spicy scallop and jalapeño and a dollop of sriracha. This combination SINGS, and it begs for a sip of Mai Tai and another bite. As for the Black Dragon roll, I have sworn an oath of silence to a secret order of sushi chefs, and I can say no more. Other than yum.

Kisaki is conveniently located just across the street from SNHU Arena on Elm Street in Manchester, and I highly recommend it for all your pre- and post-gaming. 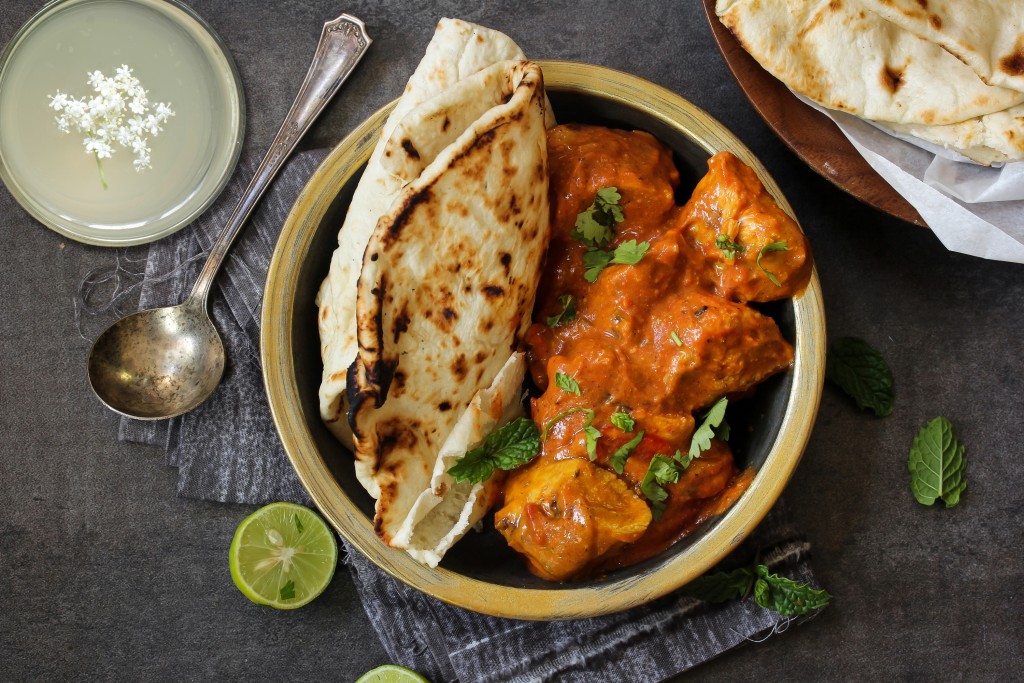 Destination India opened their doors in downtown Derry in February of 2022. The void left by Amore restaurant, which recently moved out after years of neighborhood support and love, was hard to fill. These folks came highly recommended to me and I was not disappointed. We arrived around 5:30 p.m. on a Tuesday just as the place was starting to fill up. Google reviews had been very positive about their beverage program, which is unusual for an Indian joint, so I was looking forward to deliciousness all around. As is usual in family-run establishments, just about everybody stopped by at some point to ensure our satisfaction, and we felt truly welcomed. My wife opted for the cucumber gimlet, old-school and simple. I opted to try “The Destination,” despite the fact that I am a “Journey” fan, and it blended gin, Cointreau, St. Germain Elderflower liqueur and lemon in a super-sippable up drink. Several of these may have been harmed in the writing of this article.

With an unspoken understanding that this dinner would also serve as several lunches, we proceeded to order too much food. If you are detecting a trend, gentle reader, then you are among the wise. I was making proper English-style curries when I was in my teens, and branched off into exploration of more traditional subcontinent cooking in my 20s, so I am a bit of a snob when it comes to Indian food. I ate well for three days.

We opened up with breads, both Paratha, which is a whole wheat layered and flakey flatbread. One was plain, “Laccha,” and one was stuffed with seasoned potatoes, “Aloo.” Two chutneys were served alongside, a thin cilantro sauce and a thick tamarind chutney, sour and sweet. I could spend a whole evening just eating Indian bread, and I just might, but this was just the starter. For appetizers, we ordered Chicken 65, heavily marinated chicken pieces deep-fried in a cornflour batter, and spinach pakora and onion bhaji, two types of fritters, all served with the aforementioned chutneys. The chicken was deeply infused with the flavor from the marinade, and had a nice heat punch on the tail end. The fritters were crispy and spice forward without being hot, and were a nice contrast to the chicken.

Perhaps we ordered another round.

Entrées showed up for sharing, and somehow we still had room. The Kashmiri lamb was fork-tender, in a rich sauce that had generous amounts of cardamom and a mild heat. The perfectly cooked aromatic rice made a great base for the layers of complex flavors that unfolded across this dish. Chicken chettinad is a dish I had never had before, coming from the Chettinad area of Tamil Nadu southern India. The chicken is marinated in yogurt with turmeric, red chilis, coconut (don’t tell my wife, she hates coconut but loved this dish), coriander, cumin, onions, garlic and black pepper, and is traditionally cooked in gingelly oil, made from raw sesame seeds. Once again, the layering of flavors was masterful, in a way that I feel is not an Indian monopoly but is definitely indicative of Indian influence. I will absolutely be back to Destination India. 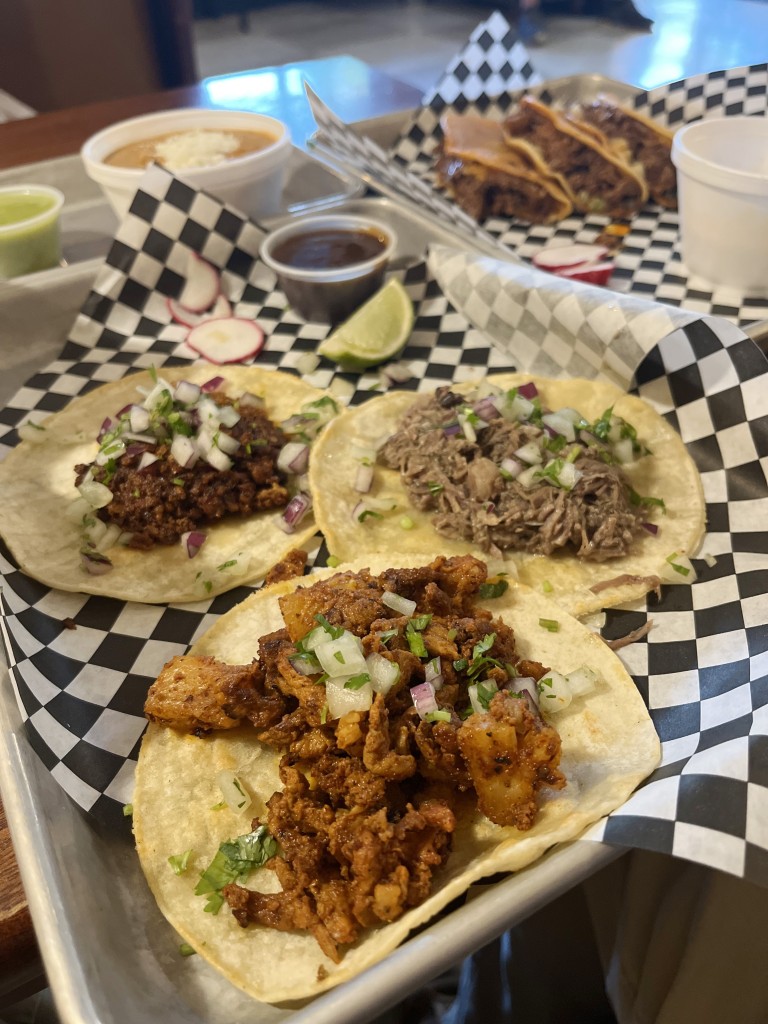 Los Reyes Street Tacos & More in Derry was recommended several times. When I says “several times,” I mean by people who respect my first-person attempt at being one who possesses Street Taco Knowledge, or “STK” for people who weren’t around 12 seconds ago when I made the term up. I knew many street taco trucks back in the day, and I set the bar pretty high. Los Reyes is subsequently my favorite street taco spot in the state. As a fast-casual location, you place your order and sit at a table until your order comes up. This no muss/no fuss/no hassle approach has become increasingly popular with the dine-in and pick-up crowd. They opened their doors in April of 2022, and they are clearly hitting their stride.

We were greeted with a friendly “Welcome, have you been here before?” It was a graceful set-up for an introduction to “fast-casual” dining, of which Los Reyes is a shining example. In lieu of the almost obligatory pastoral farming paintings, the walls were decorated with vivid photographs of Mexican street food being served in its natural environment. One of the owner’s children was dancing to the quiet music playing in the background. A substantial order of three tacos — one barbacoa (slow-cooked, often in a covered pit) beef, chorizo and al pastor. Al pastor is a structurally reminiscent of gyros or shawarma, in that it is often made as a spit-grilled layered “spinning top” of meat influenced by Lebanese settlers in the Puebla region of Mexico. I love to eat al pastor, I love to cook al pastor, and most of all I love to encounter al pastor in unexpected places. The subtle interplay of heat and smoke and sweet was exactly what I think of when I think of al pastor.

I insisted on grilled chicken chimichangas because I love fried ANYTHING, and because “grilled chx chimis” don’t leave anywhere to hide, flavor-wise. They are either great or not. These had hearty grilled flavor, nice crispness without being dried out, and were served with a savory queso dipping sauce. But the star of the show was Chino’s Birria Tacos. This is an old Reyes family recipe going back generations, where slow-stewed beef is served with red onions and cilantro in corn tortillas with a side of house-made consommé. It is messy, delicious, and no visit to Los Reyes would be complete without it. I had a Dos Equis amber to quench my thirst, and finished a Devil’s Backbone canned margarita for my designated driver. I was smiling the entire time. By the time we left, there was a line out the door.

New Hampshire has really come a long way in the 25 years since I landed here. Get out there and eat something new!