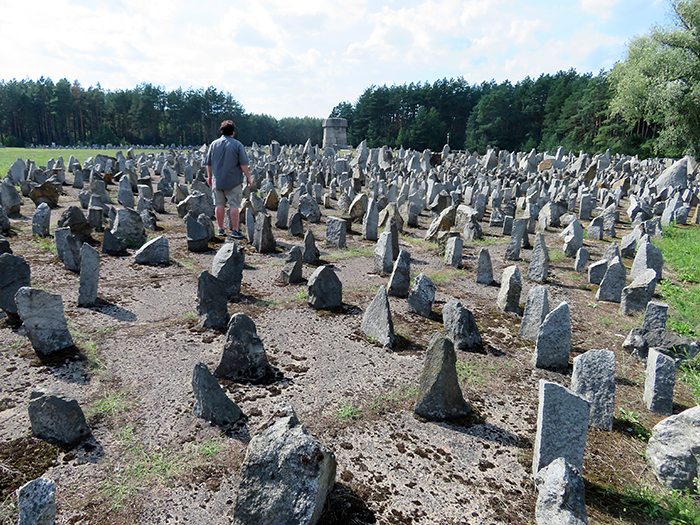 Writer Darren Garnick recently paid his respects at the Treblinka extermination camp memorial, the site where more than 800,000 Jewish people were murdered by the Nazis. Each rock represents a Jewish community that was wiped out during the Holocaust. Photo by Peter Koziell

Bialystok, an industrial city of 300,000 near the Belarusian and Lithuanian borders, is pretty much the “Cleveland of Poland.” If you click on “Things to Do in Poland” on tripadvisor.com, the city is barely mentioned at all. If you’re a foreigner in Bialystok, you’re either on your way to somewhere else or you have business or family connections.

I unexpectedly spent much of my recent summer vacation in one of Bialystok’s most unvacationlike spots — the city’s last surviving Jewish cemetery. Before World War II, 50 percent of the city’s population was Jewish. Today, that figure is zero percent. Walking in the city where one set of my Jewish great-grandparents lived and miraculously left in the early 1900s, produced two looping narratives in my head: “Thank God, they got the hell out of here” and “Thank God, I am an American.” 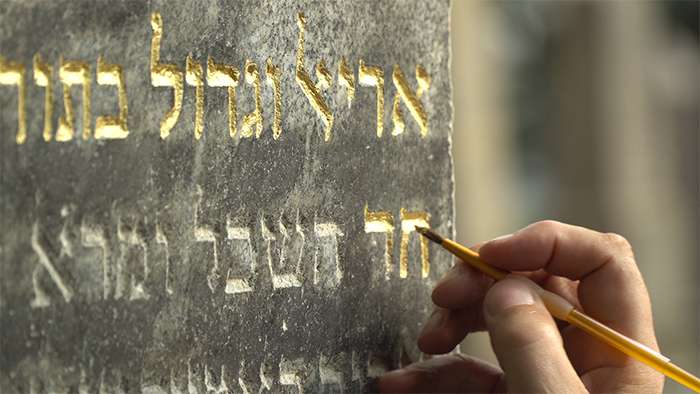 Volunteers from the United States, Germany, Poland and Israel are repainting the Hebrew letters on headstones neglected for decades in a Bialystok Jewish cemetery ransacked by the Nazis. Photo by Peter Koziell

This script kept echoing in my brain even as I was enjoying parts of my Poland trip, which included a week in Bialystok and three days in the capital, Warsaw. The country produces the most delicious soft-serve ice cream I’ve ever tasted, “lody,” which has the consistency of fudge. I was smitten by the Warsaw Pinball Museum — Poland’s answer to Laconia’s FunSpot — and by street accordion players who could seamlessly transition from Deep Purple’s “Smoke on the Water” to Katy Perry’s “Firework.” Those fun experiences, however, were brief (and welcome) opportunities to press the pause button — inevitably, my mind kept rewinding to 1939-1945. But back to the cemetery.

I first visited the Bagnowka Jewish Cemetery in 1998, when my wife Stacy and I backpacked around Eastern Europe. It wasn’t on our itinerary, but a tour guide took us there knowing my interest in exploring my family roots. I had braced myself to see smashed gravestones from the Nazi era — and there were sadly plenty of those — but was surprised to be greeted by humming chainsaws. Government workers were cutting down a forest. Trees were uprooting headstones and even growing right through them. Seeing the broken Hebrew letters at my feet made me feel like I was in a science fiction movie discovering an ancient and forgotten civilization. 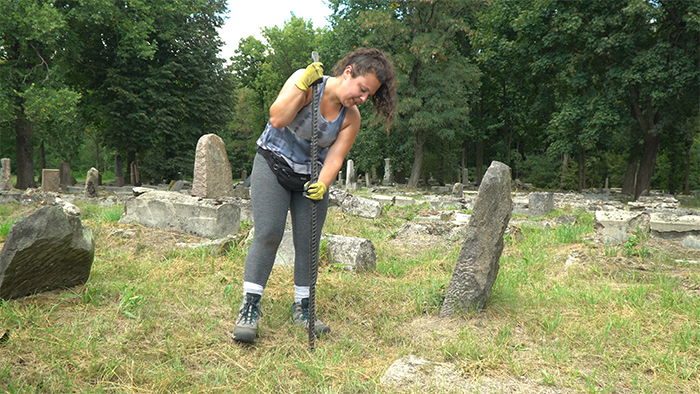 My travel book from 20 years ago still sits on my shelf. “Poland: The Rough Guide” included a few gloomy sentences about this place: “Perhaps the saddest reminder of the city’s onetime Jewish population is the Jewish Cemetery on the northeast edge of the city. … With Catholic cemeteries on both sides, an Orthodox church under construction at the back, and children playing along the walls, the large and badly neglected cemetery looks and feels a beleaguered place. The few surviving gravestones are scattered around in the undergrowth, some of them still legible, but if things carry on this way there may not be any left in the not-too-distant future.”

This past summer, I was asked to return to Bagnowka as a volunteer, using my journalism skills to capture the story of two remarkable grassroots charities — the US-based Bialystok Cemetery Restoration Project and the Germany-based Aktion Sühnezeichen Friedensdienste (Action Reconciliation Service for Peace). I was graciously joined on this trip by my longtime friend and documentary filmmaking partner, Peter Koziell, who coincidentally has both Polish and New Hampshire (Newport) roots.

Peter and I interviewed selfless volunteers from across America, Germany, Poland and Israel coming together to “right a wrong.” The charities’ leaders say they know they cannot undo the history of the Holocaust, and that Bialystok is just a dot on a map of thousands of destroyed and neglected Jewish cemeteries across Europe, but they can at least try to do something. That “something” includes piecing together and cementing broken stones, matching them to gravesites, standing fallen stones upright, and cleaning and painting stones to restore their dignity. One third of the original cemetery lawn is still covered by overgrown forest. 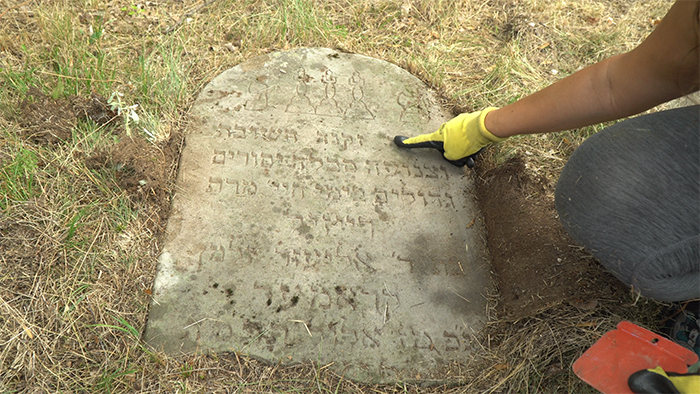 After scrubbing away the soil and overgrowth, Ali Flagler displays a hidden Jewish gravestone seeing the light of day for the first time in 70 years. Photo by Peter Koziell

One of the volunteers we met was recent UNH grad Alexandra “Ali” Flagler, who methodically poked open fields of grass with a metal stick. Whenever she heard a thud, she dug five or six inches down and usually unearthed an intact gravestone. Brushing the dirt away with her gloves exposed the deceased’s name to sunlight for the first time in more than 70 years. Seeing those Hebrew letters emerge from the debris was an extremely powerful moment for me, making me visualize the Holocaust in ways I did not feel even when visiting locations of some of the worst atrocities (such as the Treblinka extermination camp, where 800,000 people, including most of Bialystok’s Jewish population, were murdered).

The United Nations has designated January 27, the anniversary of the Allied liberation of the Auschwitz-Birkenau death camp, as International Holocaust Remembrance Day.

On January 24, Keene State College’s Cohen Center for Holocaust & Genocide Studies will host a lecture “A Play About Moses at the Puppet Theater?: Re-imagining Jewish Self-Identity in Pre-War Nazi Germany” by Professor Dana Smith. The talk begins at 7 p.m. in the Norman Walker Hall of the Alumni Center at 229 Main St. More information

I am not a particularly religious or spiritual person, but I imagined those Hebrew letters levitating out of the ground with futuristic sound effects. It was a scene I experienced multiple times with the same emotional impact. These volunteers are uncovering an invisible cemetery within the cemetery. Every additional Hebrew name that hits the sunlight is reclaiming his or her place in the world. Every stone that is repaired is honoring a soul who lived his or her entire life often decades before the Nazi invasion of Poland — having no idea that they would one day be retroactively hated for being born and marked for permanent erasure.

It’s not just dramatic symbolism either. During the week I was at Bagnowka, two different families exploring their Polish-Jewish roots found a relative’s gravestone there. Both were stones that the Bialystok Cemetery Restoration Project had previously unearthed and returned to their rightful spots.

Again, I am not a spiritual person, but if there is such a thing as “doing God’s work,” this is it.