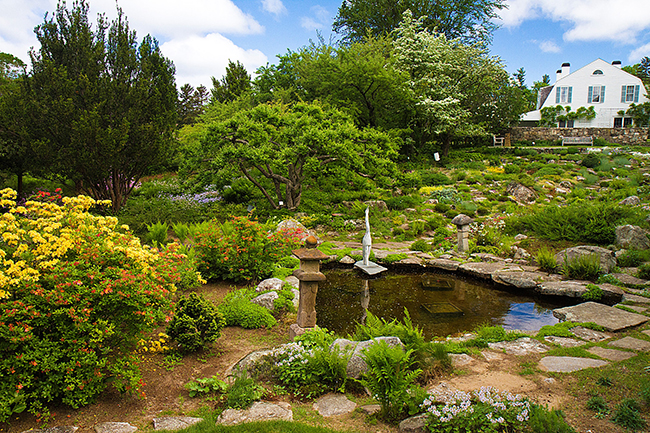 The Fells is a lovely spot for a stroll.

Like many other prosperous men of the late 1800s, John Hay chose a quiet spot in New Hampshire to build his summer house, a place to escape the city’s summer heat in the days before air conditioning. The southern shore of Lake Sunapee also gave Hay respite from a busy world of politics and diplomacy, in which he had spent his life. His first job was as personal secretary to President Abraham Lincoln, and from there he held a variety of diplomatic posts before becoming Assistant Secretary of State and later US Secretary of State.

In 1889, Hay and his wife, Clara Louise Stone, commissioned architect George F. Hammond to design The Fells, a summer cottage overlooking the lake on abandoned farmland that the Hays had acquired. The Colonial Revival style with a gambrel roof was typical of summer cottages of the time. Touring the house, we were struck by its livability — we could picture ourselves choosing a book in the library and sinking into one of the comfortable chairs to read.

The views from the large windows overlooked a different landscape when John and Clara Hay lived there. Although she planted hydrangeas and roses, the scene — like many New Hampshire pastures — was scattered with glacial debris. It was their son Clarence and his wife Alice Appleton Hay who tackled the stones and tamed the field into one of the state’s loveliest gardens. They remodeled the cottage, and as they created the formal and woodland gardens, they also returned The Fells to a working farm.

Their extensive travels in Europe, coupled with Clarence’s study of landscape architecture at Harvard, assured that these were no amateur attempts. Along the length of the house facing the lake, 100 feet of stone wall supports a perennial border where iris, hollyhocks, delphinium and phlox, supplemented by annuals, bloom in a succession of flowers into October.

The Rose Terrace combines roses with wisteria and annuals for a heady blend of fragrances in the warm June sun. In contrast, the Old Garden is a shady atmospheric set of garden rooms inside a high stone wall. Behind the Old Garden are woodland paths bordered by wildflowers, and the charming Fairy Village, a bosky spot where visitors are invited to construct tiny ephemeral fairy houses from materials they find in the woods. 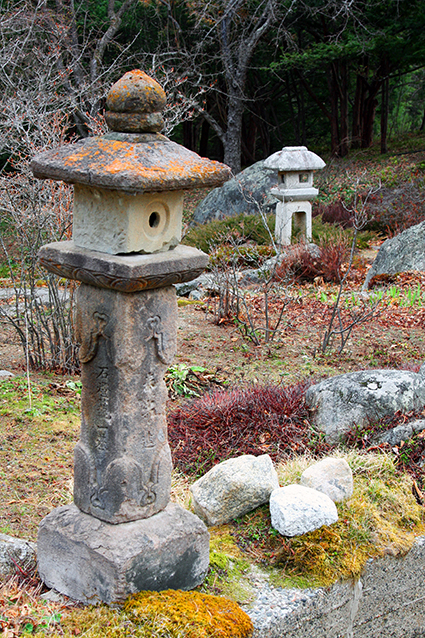 The Japanese Garden at The Fells

In an open spot, 20 varieties of heather form the Heather Bed, and we found the venerable Roosevelt Maple, planted by President Theodore Roosevelt, under whom John Hay served as Secretary of State.

Five different trails wind through the property, which is protected as a wildlife refuge, rambling across easy terrain through the forest and along the shore of Lake Sunapee. But our favorite of all the gardens and woodlands is the Rock Garden that tumbles down the hillside beside the house. A stream hops from pool to pool through a landscape of lichen-covered granite and hardy rock-loving plants into a lily pool with Japanese iris. At the edges of the garden, azaleas bloom in June, and at its top are more showy summer flowers. Some of the plants here are so hardy that they remain from the originals planted by Clarence in 1929.

It was these gardens that took us to Newbury in June, when they are at their height. But The Fells is not Newbury’s only attraction. Lake Sunapee makes up 6 percent of the town’s territory and much of that shoreline is Mount Sunapee State Park, with its sandy beach and boat launch. Rising from the shore and up the mountain are the campground, hiking trails and other recreation facilities. We know Mount Sunapee best when it’s covered in snow and home to some of the best-groomed ski trails in the Northeast. But June is the time to explore some of the places in Newbury that aren’t open in the winter.

One such place is the little Bell Cove Historic Caboose Museum on Route 103, at the site of the station on the B&M Railroad line that connected Concord to Claremont until the 1950s. The little red caboose contains rail memorabilia, including lanterns and signal lights, as well as station furnishings, brochures and timetables, and it is open during summer and fall weekends.

The railroad played an important role here, especially in pre-automobile days, when it brought the Hays and other families to Lake Sunapee in the summer, and made it possible for them to “commute” to work in the cities. But getting the trains here took quite an engineering feat for 1871, when builders had to blast through a solid rock hilltop to get to Newbury. Even with the combination of nitroglycerin explosives and a newly invented steam drill, it took a year to excavate what’s known as the Newbury Cut. The old line has become a rail trail from Newbury to Bradford, but the dramatic cut is close to the lake; you can reach it from the end of Newbury Heights Road, off Route 103.

Not far from the trail, at the intersection of Routes 103 and 103A, is Center Meeting House, especially interesting for its interior. The box pews are oddly arranged to face the entry door (you didn’t sneak in late without being noticed). The beautifully crafted wooden pulpit stands at the front of the church on four columns and is reached by a double staircase. This is the only known example of the reverse arrangement in a Federal-style meeting house, and one of the few built in pure Federal style that survive intact.

By 1880, the town couldn’t support the church and it had fallen into a pretty sad state. It was John Hay who saved it in 1892, paying for its repairs. Summer people began attending, arriving by special lake steamer on Sunday mornings. By 2005, a century after Hay’s death, the church had again deteriorated, its roof timbers sagging, the belfry badly degraded and the foundation settling. As each problem was addressed others were discovered, and the restoration continued for several years.

Finally, at the end of 2009, with the building squared and level, the windows restored and the tower back in place, the bell rang for the first time in years.