Just in time for your stay-at-home New Year’s Eve, a NH food and drink guru offers a fun and easy guide to home bartending 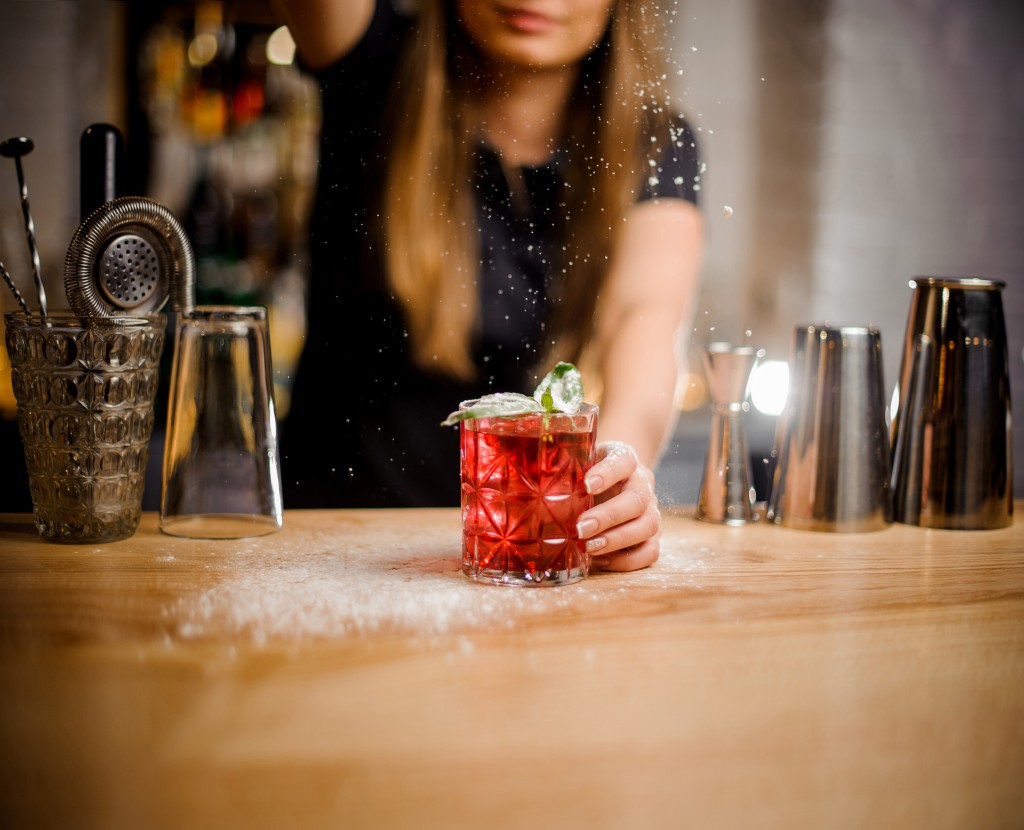 Cocktails at a high-end bar are a bit like New Year’s Eve fireworks: spectacular and pleasing, but best handled by someone with the proper tools and knowhow. Here in New Hampshire, though, we know how to stage fine fireworks displays in our own backyards (even if we aren’t 100% clear on the laws involved). But making your own cocktails? Somewhere after the Cuba Libre or the good ol’ G&T, we lose confidence.

One Granite State cuisine expert wants to make do-it-yourself cocktail mixing as fearless an endeavor as running down to Seabrook to load up on bottle rockets and Roman candles.

“I just wanted to help people, and myself, make craft-quality cocktails at home,” says J.M. Hirsch, the editorial writer of Christopher Kimball’s Milk Street and a longtime culinary explorer.

To that end, Hirsch has created “Shake Strain Done,” a detailed guide to demystify the process of cocktail making. It’s the kind of book that you’ll want to leave out on your bar: elegant and engaging with an art deco motif and lots of fascinating charts on flavor profiles and useful techniques. But, best of all, it’s filled with dozens of enticing recipes begging for your personal experimentation. In spite of gaudy names like “Snowy London Stroll,” “Minted Peach Pie” and “Peruvian Orange Grove,” these craft-cocktail recipes require only pantry staples and your basic household liquor cabinet booze to make (though you should be sure you still have some Angostura bitters left in that old bottle you inherited).

“Not everyone has 30 gins to choose from, or 30 days to infuse bourbon with lemongrass,” says Hirsch. And while puzzling over some of the techniques used by his favorite bars around the world, he realized that many things can be made simple. Like a speed infusion: “You can get the same effect as a 30-day infusion in about two minutes with a blender. Take a flavorful ingredient, chop it up, let it soak for a minute or two, and you have an amazing infused liquor.”

And feel free to experiment on your own, says Hirsch. “Most high-level mixologists are unafraid. I’ve tried to learn from them, and learn that sense of adventure when it comes to flavor.”

To help embolden you, Hirsch has taken on the terminology of the mixologist. “The language they use is so incomprehensible, it was really important for me to use a language that we can ‘taste.’” To accomplish this, he narrowed the complex flavors that can be found in a gimlet glass to 11 characteristics, like fruity, herbal, spicy, refreshing or just plain old “strong” and, like a periodic table of elements, allows the home cocktail alchemist free rein to play with them, after first showing some examples of how they work together.

“It also helps you explore other cocktails that you might not have considered trying,” says Hirsch. “When you see that a tequila drink you like is refreshing, sweet and sour, and then see a whiskey cocktail described in similar terms, you have an open door to explore something new.”

And the point of simplifying is not to eliminate the charming bric-a-brac of the typical home bar, but to finally know how to use it. To that end, “Shake Strain Done” includes a chapter titled “The Basic Bar” that lists the essential bottles, tools, garnishes and extras you’ll want to have around for moments of inspiration. Hirsch recommends you ignore the “dayglow red” Maraschino cherries at the grocery store (“they don’t belong anywhere near a cocktail!”) and instead splurge on some real syrup-soaked Italian cherries like the dark-red Luxardo brand. And some tips are pretty basic, if not well known.

“My absolute favorite and stupid-simple suggestion is salt,” says Hirsch. “Most of us think that’s what we put on the rim of a lousy Margarita, but that’s the worst way to use salt. As soon as your lips touch your glass, you’ve blown your taste buds.” Hirsch suggests you use a tiny dropper of salt solution to explore the power of this famous flavor enhancer, or just throw in 6 to 10 grains of kosher salt and see how it completely transforms the flavor of a cocktail. 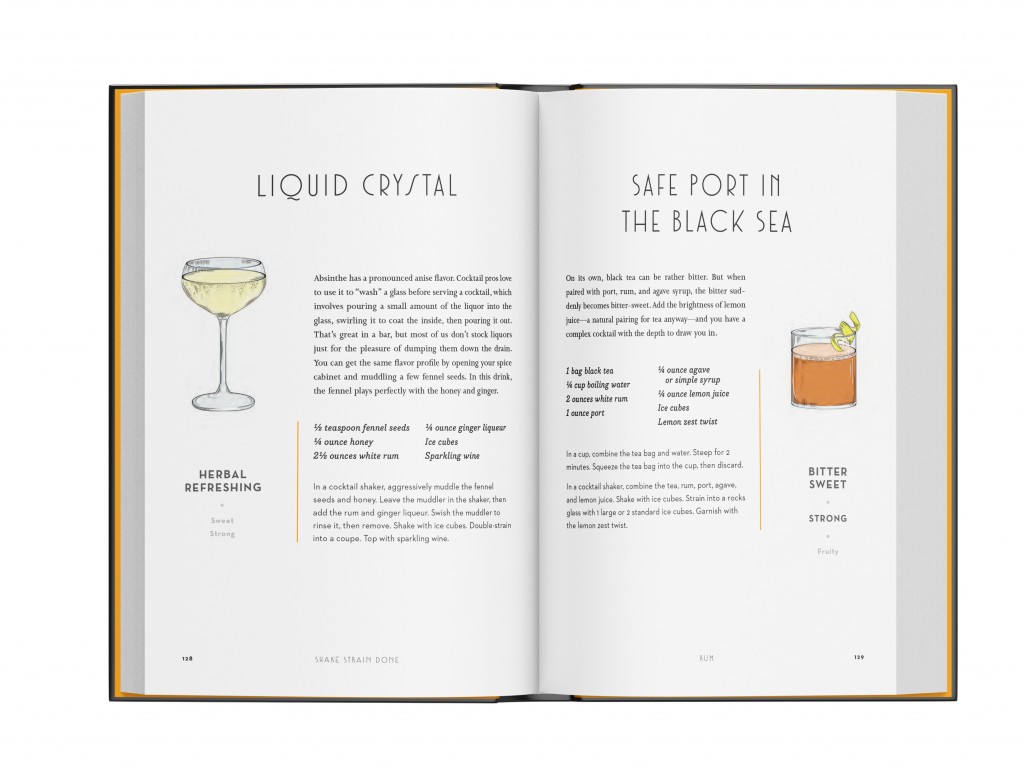 Here are a couple of options from the “Rum” section of the recipes. The “Liquid Crystal” formulaton is the author’s pick for an impressive New Year’s Eve toast.

The gallery of drink recipes in the book is classified in sections under the primary active ingredient (from brandy to whiskey and wine) though some, like the contemplatively titled “Golden Vesper” (flavor profile: strong), allow you to mix a little vodka with your gin.

A favorite bar tool of his to recommend to amateur barkeeps is a cloth Lewis bag for crushing ice and a wooden mallet (though, he notes, you can achieve the same effect with a plastic ziplock and a rolling pin). Not only is crushing ice great therapy, he says, it’s also a chance to experiment with yet another unconsidered aspect of cocktail crafting.

“The most common error is too much ice,” he says. “Liquor has flavor compounds that need some degree of dilution to fully appreciate the flavors at play. This is why you always add a few drops of water to a high-proof whiskey to open it up a little bit.” But a little water can go a long way, and the amount desired for most cocktails is actually pretty low. “Just enough ice chills and dilutes just enough. Add too much and you kill those flavors.” The exception being when you are shaking and straining, where the dilution ends when the drink is strained.

“I will often use just one tiny ice cube,” says Hirsch. “Sometimes I will leave it in my drink a while, then fish it out and throw it away.” Large ice cubes have become trendy in fancy bars and they look impressive, but there’s science behind the trend. “The larger the ice cube, the slower it melts,” he says.

Like any hobby, things tend to get out of control over time so, for some, “Shake Strain Done” will serve as a way to rediscover the joys of simplicity. Hirsh counts himself among this group. “I have two liquor cabinets and seven drawers of tools,” confesses Hirsch. “But that’s just because I’m a geek.”

So what is a DIY cocktail maker to do on New Year’s Eve when serving a date or a small, socially distanced group of revelers? Hirsch has a suggestion from among his trove of delights.

“What everyone wants is a little sparkling wine,” says Hirsch. “So I would go with the Liquid Crystal. It’s a sparkling wine cocktail but with more nuance than you’d expect.” And more punch. The sparkling wine is mixed with ginger liqueur, fennel seeds and 21/2 ounces of white rum.

The book had already gone into a second printing by the time this story was being written, and Hirsch is taking his DIY show on the road (so to speak, in this age of Zoom and masking). He’s offering classes via the Milk Street online programming (177milkstreet.com), and planning his next field trips to find the exotic flavors (and spirits) of the world, capture them and bring them home to share.

Local Liquor for Your Homemade Cocktails

One-stop shop
While we look forward to once again visiting the beautiful tasting room at Tamworth Distilling, the next best thing is ordering spirits for curbside pickup. The online order form offers their many excellent spirits, including the Art in the Age series, plus all the fixings for a great cocktail — bitters, tonic water, ginger beer, club soda and the Common Man’s bloody mary mix.

The website also has an entire page dedicated to recipes that feature Tamworth ingredients, which is categorized by the type of spirit. Check it out at tamworthdistilling.com.

The package includes a Smoky Quartz-branded two-liter oak barrel — American oak with a No. 3 char — and two bottles of its Granite Lightning Moonshine. Pour both bottles of the moonshine into the barrel, set it aside — maybe kill the time with a few sips of Owner/Distiller Kevin Kurland’s award-winning V5 Bourbon — and six weeks later, you’ve got your own barrel-aged bourbon.

“The magic is in the barrel,” Kurland says. “Ninety percent of whiskey’s flavor comes from the aging process in the barrel. That’s where you get the color, flavor and aromas.”

The final product tastes similar to the Smoky Quartz V5 Bourbon — a high-corn whiskey with notes of vanilla and spice and caramel on the backside. ($100)