Cities (and Towns) on the Rise: Milford

Even here in the best state in the country (our opinion, but heartfelt) cities rise and fall over time. But some places don’t take the changes lying down and choose to take charge of their futures. Like Milford (one of a five-part series).

But, like the green plant that grows in the crevice of a rock, cities and towns, one by one, gained new life. It wasn’t easy; it took considerable resources, determined leadership and a ton of community spirit. In this special series, we profile three cities and two towns that are among the most successful: Milford (read below), Littleton, Rochester, Claremont and Laconia.

It wasn’t so long ago that you wouldn’t have seen world cuisine offered in Milford. “It was a little out-of-the-box,” says Rachael Barnard, co-owner of La Medina, which offers world cuisine. But she knew that diners in Milford and the surrounding area had grown more sophisticated and would support the venture.

Her restaurant is one of many that have opened their doors in Milford in recent years. Of note as well is Greenleaf, operated by a pair of restaurateurs renowned in the state. Chef Chris Viaud and Keith Sarasin, sensitive to the preservation of historic places, chose a circa 1860 downtown bank building for the restaurant.

It’s that type of preservation that many cities and towns hope for. “It preserves a piece of history,” says Lincoln Daley, Milford’s director of community development. He adds that the burgeoning number of restaurants in Milford provides the opportunity for other businesses to build on the foot traffic the restaurants generate. “It’s a nice little hot spot for businesses,” he says. One reason Milford is a hot spot is its prime location, close to Nashua and Manchester, not far from the Massachusetts line. 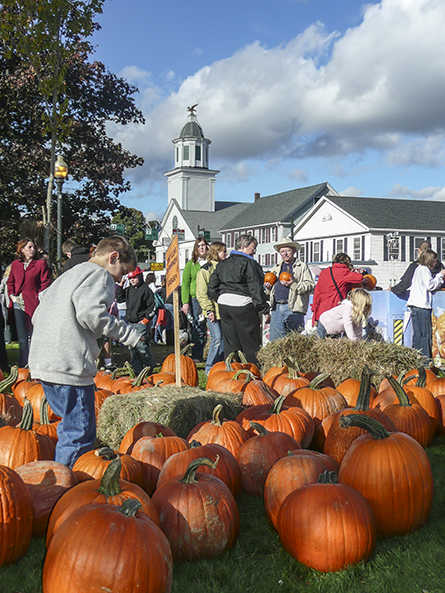 The Milford Pumpkin Festival draws tens of thousands of visitors to the town’s downtown every year.

Back in the 1980s, it was a very different scene. According to the Milford Improvement Team website, Milford had just a few struggling businesses, deteriorating public ways and a reputation as a gathering spot for drug dealers. When the historic town hall was close to being condemned by the State Fire Marshall, the community responded by approving funds to restore it.

That was a catalyst for change. Grassroots initiatives, like making the popular pumpkin festival an annual event, began. Those efforts were formalized in a citizens’ group that eventually merged with Main Street America, a program established by the National Trust for Historic Preservation to address the issues facing older and historic downtowns.

Part of the Main Street program, which has successfully been used in many New Hampshire communities, focuses on improving the appearance of downtowns. In Milford, it meant brick sidewalks, attractive lighting and improving pedestrian movement around the downtown’s ring of stores — the “oval,” as they say in Milford. Lincoln Daley says, “First impressions count. For many people, the downtown is the first impression of a town or city.”