As the weather warms, Bradford awaits 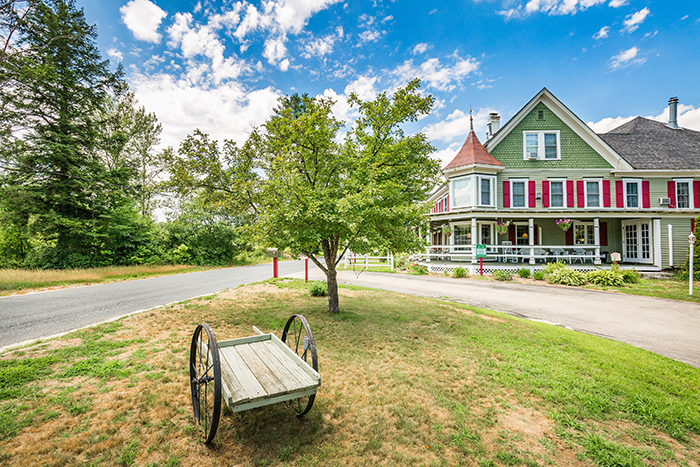 The Rosewood Country Inn is a cozy, elegant place to stay while checking out all that Bradford has to offer. Photo by Stillman Rogers

Our quest for glacial erratics is matched only by our interest in bogs. Both are the legacy of glaciers, so it’s only to be expected that New Hampshire has a good share of each. It was a bog that took us to Bradford, where we found two other natural phenomena and an active little town as well.

The Bradford Bog, on Bradford Springs Road near the East Washington town line, is reached by a boardwalk that leads through another unique environment: a splendid Atlantic white cedar swamp, rare this far from the coast. After passing through this eerie dark forest with its tangled and moss-covered roots, the boardwalk enters the bog itself. Filled with typical bog plants — laurel, heather, tamarack, bog rosemary, black spruce and others — the bog is surrounded by low hills, and the boardwalk leads to an observation tower at its center.

Just up the road from the bog entrance is — or rather was — another natural wonder. Bradford Springs were known before Europeans arrived, valued by Native Americans for their medicinal qualities. In 1858 a hotel, The Hermitage, was built beside the springs to accommodate those seeking cures, and in 1881 it was expanded to 75 rooms, adding an octagonal springhouse and a three-room bathhouse. The waters, which did contain a wide variety of minerals, including sulphur, were touted by the hotel as beneficial for every ailment from eczema and malaria to rheumatism, inflamed eyes and dyspepsia.

The popularity of “taking the cure” had waned by the turn of the 20th century, and the hotel closed. The buildings were dismantled, leaving only the Spring House, which remained in place until the 1970s, when it was restored and moved to Musterfield Farm in Sutton, where you can see it today, along with an engraving of the hotel. The spring has dried up, but you can find its stone-lined ring and some of the hotel’s granite foundation.

An even less known natural landmark is near the intersection of Route 103 and Main Street (Route 114). The Tall Pines Scenic Rest Area marks a stand of 14 white pine trees that are over 250 years old and tower more than 100 feet above the ground. Among the state’s tallest white pines, this rare stand of virgin timber is a reminder of the forests that once covered the state. The few other remaining stands are usually far from roads or on steep and hard-to-reach mountainsides.

Bradford has more than its share of tall trees, with 10 at latest count on the NH Big Tree list, including the champion paper birch and balsam fir. The two latest, a red spruce and a red maple, were added just last year by local tree-spotter George Beaton. We know this last because we picked up a copy of Bradford Bridge, an information-packed local newspaper.

We learned from it that we could get Indian take-out dishes at the Bradford Market, have a Sunday breakfast buffet at Appleseed Restaurant and buy Kisakanari grass-fed lamb at Sweet Beet Market. The market is the product of the Bradford INNovation project, and is located in the old Bradford Inn, which had previously sat empty for 10 years. The inn is being revitalized as a center for community activities, thanks to a group of energetic young people who have returned to live in their hometown. Part of the initiative is the Kearsarge Food Hub, a network of more than 30 local farms and producers with a goal of bringing the community closer to local agriculture.

As a part of their mission of supporting small businesses and food-related entrepreneurs, and creating a space for locals to gather, the latest addition in the building is The Village Café.

Currently, the café serves breakfast and lunch Friday, Saturday and Sunday, with changing menus the can range from buttermilk pancakes to huevos rancheros or breakfast sandwiches on English muffins from the Sweet Beet Market’s bakery. The lunch menu offers hearty soups and perhaps mac and cheese, a Cuban sandwich or a mushroom, tomato and halloumi melt.

There are occasional Sunday afternoon teas and dinners served in the bright and cheery café, and you may happen in when a guitarist or other musician is playing. Future plans for the inn include a shared-use commercial kitchen and a community event hall — the big old inn building has lots of growing space.

Bradford remained a popular spot for a country retreat even after the big hotel at the springs closed, and in 1896 the Messers opened their home to guests. From the original six rooms, Pleasant View Farm grew to accommodate 85 guests, with a dance hall, bowling alley, casino and its own golf course. It was well-known as a luxury resort for the wealthy escaping the summer heat of the cities and hosted some of the great celebs of the era, including Charlie Chaplin, Gloria Swanson, Jack London, Mary Pickford and Douglas Fairbanks.

Now the Rosewood Country Inn, it’s still thriving as a gracious B&B, as well as a venue for musical shows, comedy nights and craft evenings. Inn guests and Bradford neighbors join here for sip-and-craft workshops that include all the project materials, wine and snacks. The 12 acres of its landscaped grounds include gardens, a pond and a gazebo, along with views of Mount Kearsarge in the distance.

Some of the Rosewood’s individually decorated rooms and suites are named for the former inn guests; the Mary Pickford Suite is a corner room with a fireplace and views across the garden and gazebo. Most of the rooms have fireplaces and comfortable seating areas with wing chairs, and some have canopied four-poster beds. Along with other efforts to reduce the carbon footprint, the Rosewood’s owners have installed solar panels on the grounds that provide about 75 percent of the inn’s electricity.