A new owner takes over at a local Manchester favorite 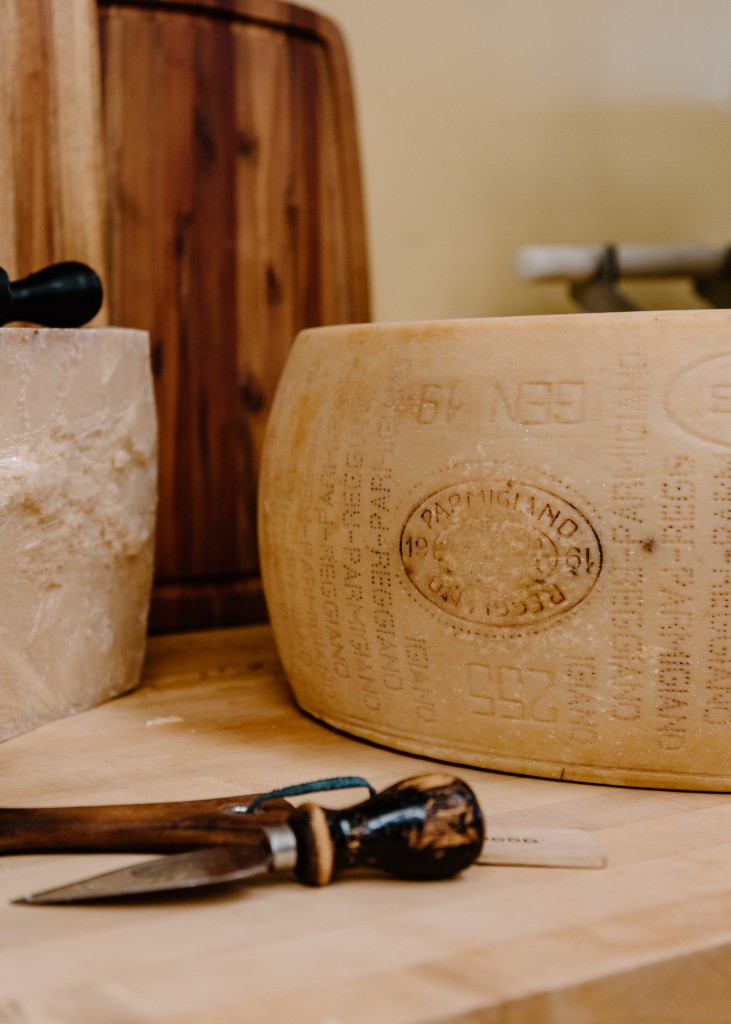 As I walk down Chestnut Street in Manchester, a bright orange awning beckons me toward an otherwise nondescript building holding down the corner of Chestnut and Appleton. If you’re not already in the know, it would be easy to walk right by this neighborhood treasure. That would be a mistake.

Although this spot led many lives during the last century, for the last 40 years it’s been Simply Angela’s (formal name Angela’s Pasta & Cheese Shop), a specialty grocery store that’s really much more.

It’s a store that “makes fresh food all day, every day,” new owner Steven Freeman tells me. As you might guess from the name, much of that fresh food is pasta — ravioli, noodles, pasta sheets, and dishes like their famous lasagna. They also pack in an impressive amount of grocery and kitchen items in a relatively small space, including a nice selection of wine, gift baskets (which they can ship to all 50 states), plus a deli counter with a cheese case, imported meats, fresh local bread, pastries and more.

I first met Steve when he was a practicing architect and I was supplying stone surfacing to the building trades. An offhand conversation about old marble with Ed, the owner of Manchester’s Republic restaurant, resulted in an introduction and eventually a beautiful stone restoration/installation at what soon became Republic’s sister restaurant, Campo Enoteca on Elm Street (Republic and Campo recently merged, becoming the Republic of Campo).

Steve and I enjoyed working on the project together, and maintained contact after he transitioned to the role of owner’s rep for Catholic Medical Center, meaning he managed all design and construction projects for the company.

He actually once applied to work at Angela’s in 1994, but was passed over. In the back of his head, he jokingly said, “If you’re not gonna hire me, I will just buy the business!” When beloved co-owner Butch Lavigne passed away a few years ago, Steve met with Jerry Lipet, the remaining owner, to discuss the possibility of passing the torch. Thus began the exciting entrepreneurial process of pro formas, business plans, nondisclosure agreements, and everybody’s favorite exercise — going to the bank for a loan. After a short stint at BAE to build some capital, Steve made the move in July 2020 and purchased Angela’s. 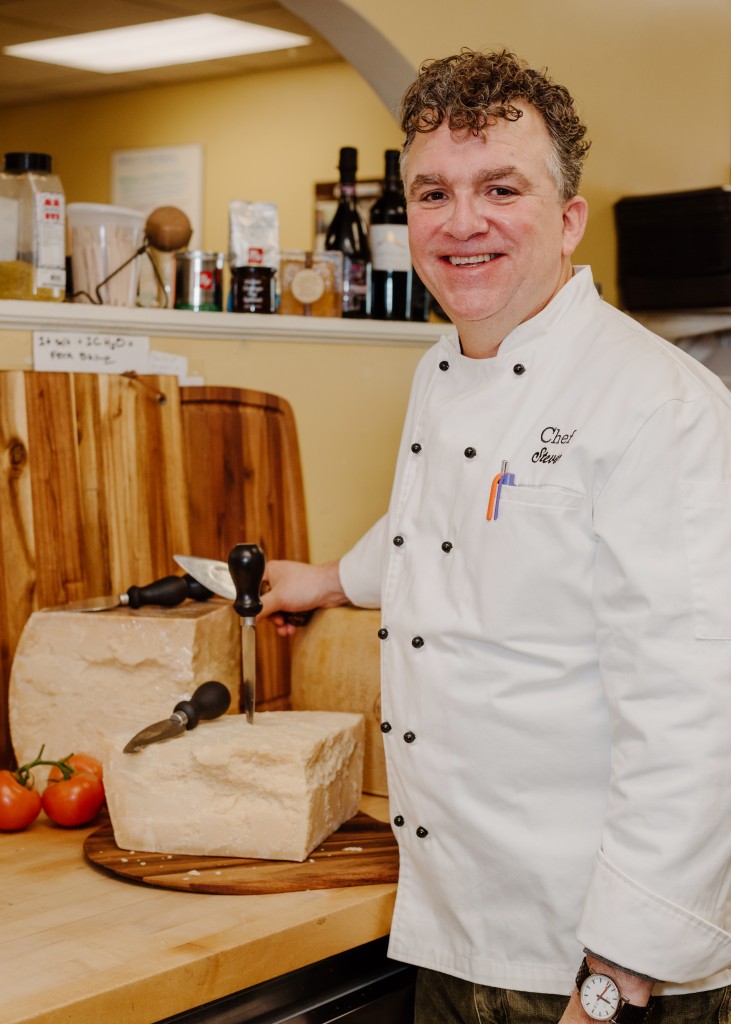 The hospitality industry was appealing to him, he says, but ultimately he realized that wasn’t right move. “I would have to be the chef, and deal with the turmoil of that industry,” he says. With the added complexity and uncertainty of COVID-19, a business that could eventually operate on its own was more appealing, which brings us to Angela’s.

If you’ve never visited Angela’s, I won’t chide you, but you’ve now been duly notified that it is in your best interest to do so. Their wine selection is fairly extensive for such a small footprint, and it’s well curated. They offer fresh bread on rotation from local bakers every day, and even a few dessert options from Modern Pastry in Boston. Their cheese selection is better than most of the foodie mega-stores (you know who I mean), and their selection of imported meats makes me think I am in the Salumeria Italiana on Hanover Street in The North End. Meandering over toward the freezer section, there is fresh pasta, cut to order, fresh hot and sweet Italian sausage, several types of housemade sauce, and always smiling folks to answer any questions (trust me, they’re still smiling behind the masks). There are a variety of frozen housemade items such as seafood lasagna and stuffed shells, and a selection of antipasti items to round out the meal.

When I ask about what he intends for Angela’s, Freeman says simply, “To keep the mission the same, and build upon it.” And what about the mission? “We’re the type of store where if a customer asks, ‘Do you have green peppercorns in brine?’ We can say, ‘Yes, we do!’” A frequent reply is often something like, “Oh, I’ve looked all over, I should have just come here first.” Indeed.

Beyond the food and the experience is the legacy, both short-term and long-term. “We want to get a hold of more of the community, because I don’t think many people around us know about us,” says Steve. “Our customers know and love us, but I think our customers represent a very small percentage of the population of this community.” 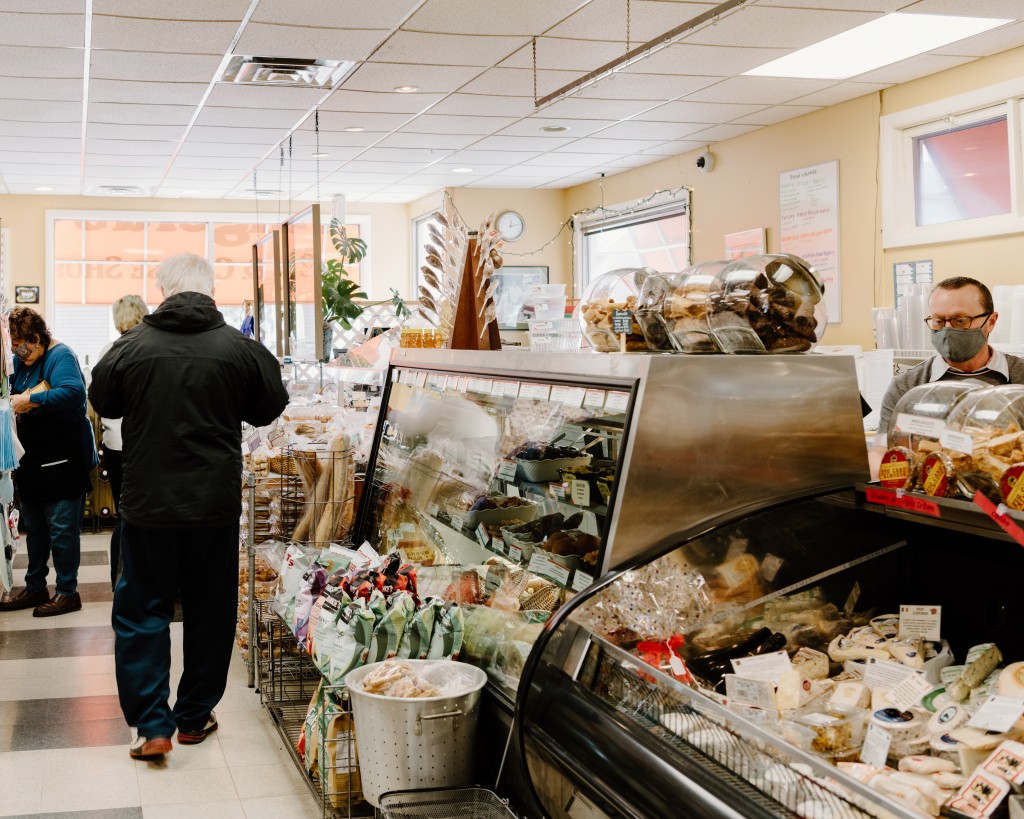 Angela’s may not take up much square footage, but it’s packed with specialty grocery items, from cheese and wine to imported meats and local bread. Photo by Morgan Karanasios

Though Angela’s history stretches back over 40 years, Steve does not plan to rest on longevity alone. Angela’s is, without a doubt, a Manchester institution, but Steve says he has a civic responsibility to make his community better and stronger. Key to that, he says, is supporting local nonprofits.

“You have impact and influence as the owner on strengthening your community by choosing your charities,” says Steve.

Another big initiative is reducing the stream of materials headed to the landfill. This time last year, they were filling a three-yard dumpster (the size of a VW Bug) three times a week. After a complete reevaluation of packaging and disposal expectations, they brought on one, then two, three, four, and eventually five recycling containers. A dedicated cardboard recycling dumpster was added to the mix, and now they empty that three-yard dumpster less than once a week. Plastic packaging on to-go orders was also reduced, which has the added bonus of both looking better and better preserving the food.

In the end, they strive to be “a place that has ‘that thing’ that you can’t find at the big grocery store — that special ingredient,” says Steve. “And if we don’t have it, we will try to get it for you.” In this, and many other things, they have succeeded beautifully.