A Slice of Heaven

From the traditions and rules of Naples to the neighborhood parlor — what defines “real” pizza? 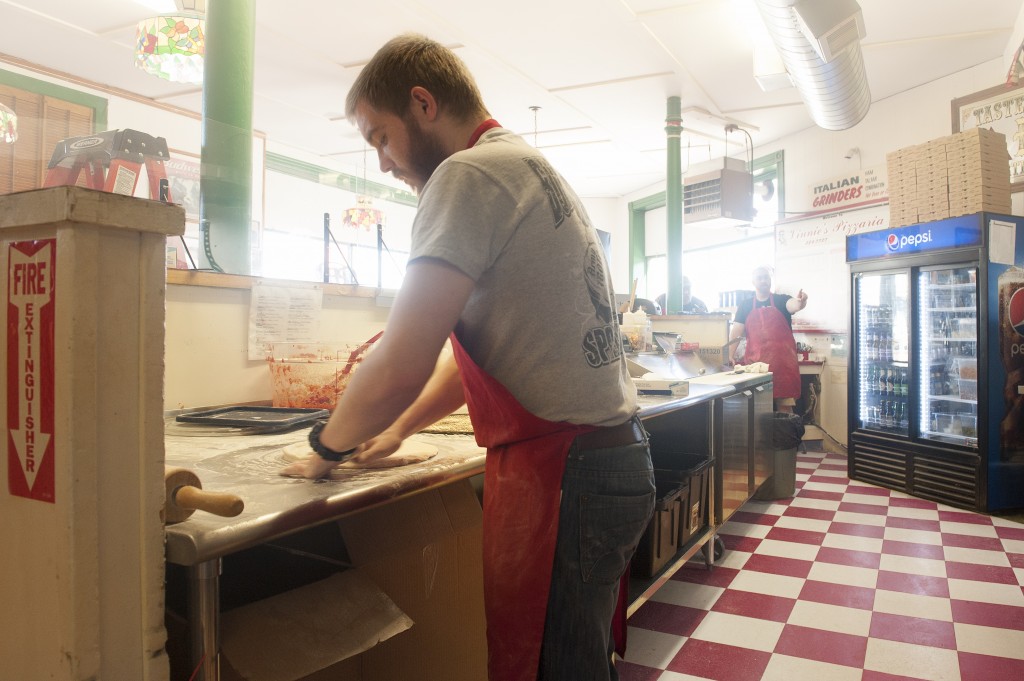 The origins of pizza, like so many everyday things, are mysterious. The word may be related to pita, as in the pocket bread. Others trace it to the Germanic root that gives us the English “bit.” No one knows for sure. The food itself is equally hard to corner. In the “Aeneid,” Virgil describes Aeneas arriving in Italy and eating something that sounds like a proto-pizza, but clear across the sash of the Old World, from focaccia on the French-Italian frontier to naan in India, obvious cousins abound. Pizza’s openness to suggestion enhances its mystique. It’s part of what makes it so popular. 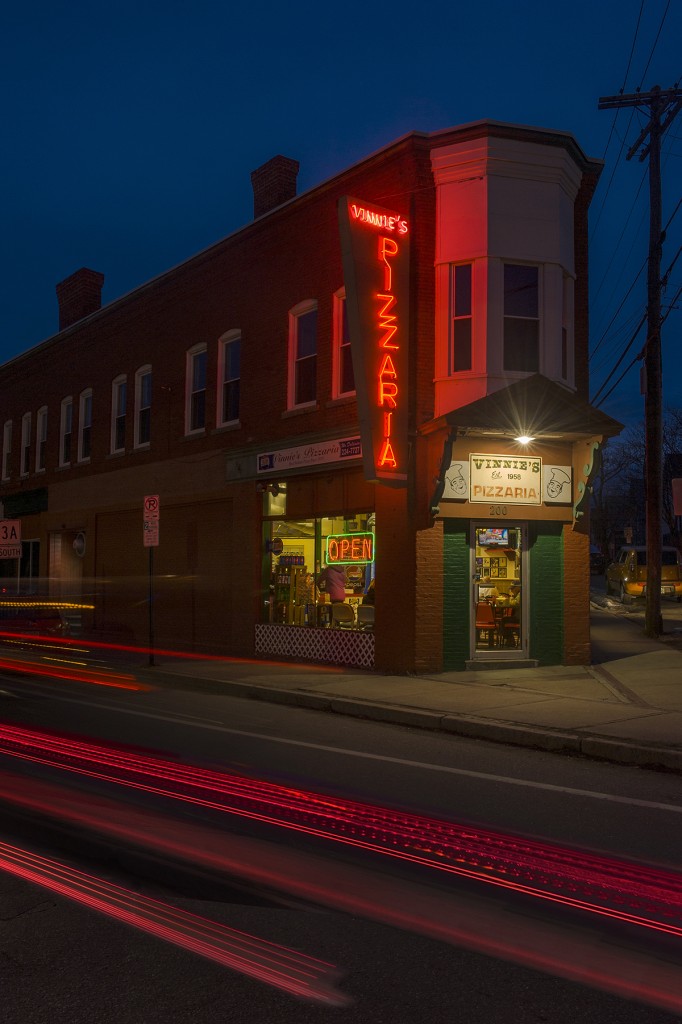 For those who want certainty, strict rules do exist — surprisingly strict, to anyone who’s ever witnessed the bedlam of Naples, undisputed birthplace of pizza as we know it and headquarters of the Associazione Verace Pizza Napoletana, whose code of regulations is as long as the US Constitution. Only two types pizza are deemed authentic: marinara, with tomatoes, garlic, oregano and olive oil; and Margherita, with tomatoes, cheese, basil and olive oil. Stern imperatives — “Never add fat or sugar to the dough” — sharply curtail the possibility of improvisation. Technical specifications dictate acceptable flour types and water pH. (I’ve met Neapolitans who insist that their volcanic-gas-aerated tap water is the real secret, and that pizza therefore cannot possibly be made beyond the shadow of Vesuvius.) Diameters may not exceed 13 ¾ inches, and the dough must be cooked on the stone oven surface, never a pan, for not more than 90 seconds. The finished product should have a thick, airy crust and be “soft, fragrant, easy to manipulate and fold.” Pizza, thus prepared, “should be consumed immediately, straight out of the oven, at the pizzeria.” Such consumption is almost always done with fork and knife.

I lived in Italy for years and incline toward purism. These rules, to me, are akin to Holy Writ. Nevertheless, I’ve noticed a funny thing about pizza. No matter how hard I rack my brain, I can’t remember a single bite I haven’t enjoyed. Even the soggiest palate-singeing cardboard of Lunchlady Land tastes better than anything you’d reasonably compare it to. Bad pizza is like a Hollywood movie, satisfying our most primitive needs in the crassest way possible, a guilty pleasure. Truly good pizza, once you’ve had it, is like nothing else; it just doesn’t occur to you to make comparisons. Three simple ingredients, dressed with a little salt, oil and basil. Sixty seconds in an oven. A miracle. It’s as if every further elaboration signified a lack of faith.

Pizza reached New York around 1900, before it was known in many regions of Italy. Related bread products from southern Italy came too and were all called “pizza.” Soon immigrants were riffing on these in response to ingredient availability, the different demands of local taste buds, and freedom from the watching eyes of tradition. By the 1930s this Americanized pizza had followed Italians to New York, New Haven, Boston and Chicago, but remained an essentially exotic food elsewhere. Only after World War II did pizza explode on the American scene. It was familiar enough by 1953 to constitute the central simile in Dean Martin’s “That’s Amore,” and two popular songs recorded in 1958 were Lou Monte’s “Pizza Boy U.S.A.” and Norman Fox and the Rob Roys’ “Pizza Pie.” Like Chinese restaurants decades before, pizza parlors became fixtures of American towns large and small.

1958 was also the year Vinnie Salerno, born in New Jersey to a family whose name stems from a smaller city beneath Vesuvius, opened Vinnie’s Pizzaria [sic] in Concord. Nowadays, the misspelling of pizzeria on the neon sign draws your attention. So does the wedge-shaped building that always reminds me simultaneously of the Flatiron Building and a slice of pizza. The façade and sign, as well as the restaurant’s interior, reproduce the tricolor scheme of the Italian flag, or, if you prefer, of the iconic Margherita pizza, with its mozzarella-white, tomato-red and lively basil-green. The floor is a red-and-white checkerboard, like an all-American pepperoni pizza, and there are colorful stained-glass lamps above. Old photos of boxers decorate the walls, and a reverently framed John and Jackie Kennedy guard the entrance the way the Pope often does in Italy. Only a rosary dangling from a thumbtack is missing. If there were a Best of NH award for “Pizza Joint That Looks Most Like A Pizza Joint,” Vinnie’s would win.

To me, American pizza is what it is — good but seldom great. It’s this ambiance, as much as what I put in my mouth, that makes it. It’s like walking into the past, into teenage nights at Milano’s in Milford, local pizza joint of my youth, where dry Parmesan and crushed cayenne in glass cylinders were always on the tables, or into some unknown pizza parlor of my parents’ 1950s nonage. This kind of pizza, eaten in these kinds of places, just tastes right. 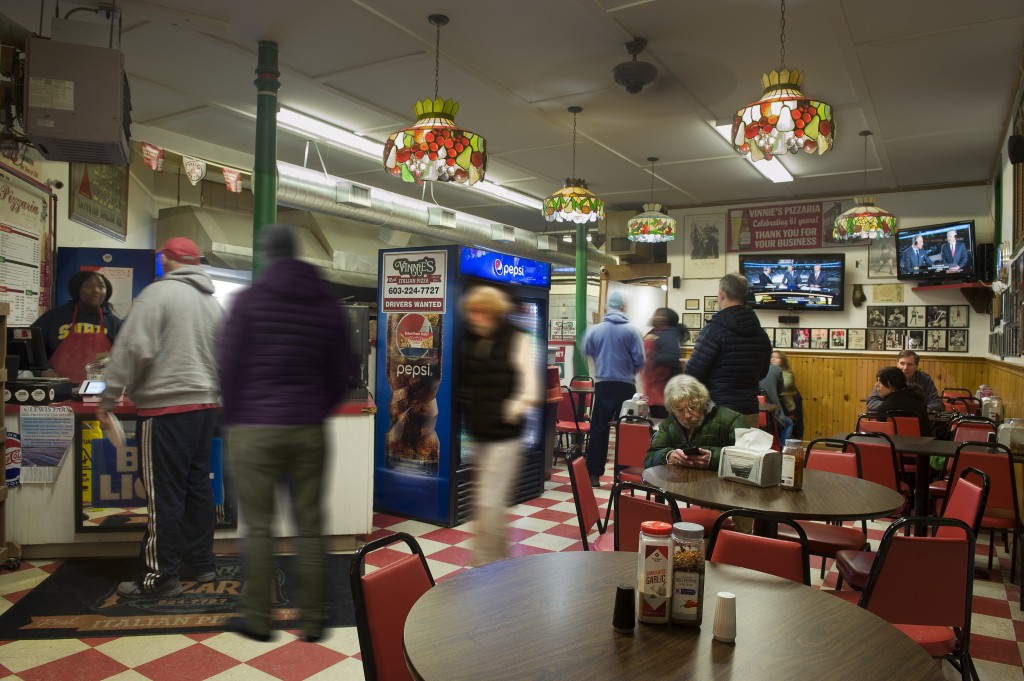 I recently grabbed a small cheese from Vinnie’s when passing through Concord. The ambiance was suffering from COVID-19, but the pizza was at once firm and soft, like a good pillow. The dough had a pleasing tension throughout, somehow reminding me of pasta cooked al dente — pert. The crust had a restrained fluff inside and, although there was some oil, was not unmanageably greasy. The cheese was the usual chewy stuff, the house herb blend far busier than anything you’d encounter in Italy.

It was served, of course, with one of those round plastic thingamajigs jabbed in the middle, whose purpose I’ve never quite understood, except as a token of pizza-joint authenticity. As thick as the crust all the way across, it would have failed the Neapolitan foldability test, but this made it ideal for snapping up slices behind the wheel in the time of the new coronavirus: Everything held together impressively, even when I reached down with a slice in hand to knock fourth into fifth merging onto I-93. Not a crumb got away. There was a sweetness in the tomato sauce that, in theory, I disapprove of. But my palate didn’t protest. And as invariably happens with pizza-joint pizza, no matter how long I wait, I burned the roof of my mouth.

It was, in its way, perfect.

Pizzas From Beyond by Bill Burke

There are those who consider pineapple on pizza an abomination. These are not adventurous folk.

Old-school and reliable has its role — (insert your town here) House of Pizza is part of the culinary fabric of every hometown — but occasionally it’s time for something slightly more audacious. For those who crave something a little extra on their pie, here are six Granite State dining destinations/mad scientist laboratories that create memorable flavors beyond the tried-and-true.

With wood-fired pizzas tagged Sweaty Meat and the Hey There, Hot Stuff (sausage, charred jalapeño jam with fried bread crumbs), you’ll have to remind yourself that Seth Rogen didn’t craft the menu. Probably. Come to this Coös County spot for the comfortable, homey feel (it’s in a white house with a porch, after all), but stay for the Best of NH award-winning blueberry pizza with house bacon, smoked mozzarella and smoked maple syrup.

Also, tip Carter $1 and he’ll flip your pizza dough in the air.

Choosing from the long list of unusual toppings at the still-thriving Queen City location can feel incredibly random — just open the pantry, throw some dough in and see what sticks. But somehow, the creative chefs here make it work perfectly. There’s a mac & cheese pizza with applewood-smoked bacon, bread crumbs and parsley, and an utterly unique Tirrenia farm egg pizza inspired by a trip to Tuscany: San Marzano red sauce, spinach and proscuitto, topped with a farm-fresh egg, served Tuscan-style — uncut. Break the yolk, experience the culinary experiment, and you won’t even remember how to spell pepperoni. 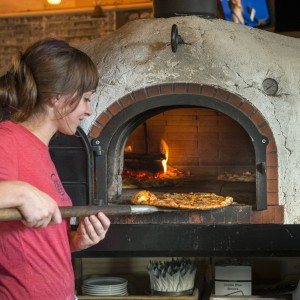 Expect rustic, handmade, Neapolitan-style designed to pair perfectly with Schilling’s European-style brews. Though described as simple and fresh, don’t underestimate the top-notch fare in this funky space inside a renovated 18th-century grist mill overlooking the Ammonoosuc River. Consider, if you will, the Ranch on Fire — chicken, bacon, jalapeño, mozzarella and (the secret weapon) housemade ranch dressing.

Owner Jason Isabelle takes an innovative approach to building better lives and communities through his two locations while simultaneously crafting great New York-style pies. Try the Fire Cracker (buffalo tenders, banana peppers, jalapeño peppers, extra cheese, and, if you want, ranch or blue cheese instead of pizza sauce). And now that baseball is back, tip your hat to the Green Monster — spinach, broccoli, green peppers, onions, provolone and feta. 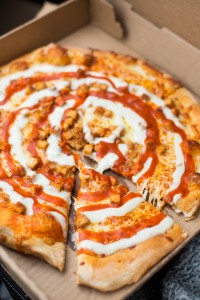 Located right on the corner of Central Avenue and St. Thomas Street, across from Dover City Hall, La Festa offers both brick oven and New York/specialty-style pizzas. It’s tempting to ease into things with the Philly Cheese Steak Brick, but spring for the Cukamunga — if only because it’s fun to say. It’s got spicy buffalo chicken, bacon, red onion and mozzarella, finished with cucumbers and ranch dressing.

Evocative names hint at creative combinations at this Lincoln destination. The “Advanced Pizza” corner of the menu features the Sunset (sliced ham, smoked bacon, pineapple, mozzarella and provolone), the Fiery Sunset — as above, but add jalapeños and a hot drizzle sauce — and the appropriately named and fully loaded Yard Sale. The flavors here, though, are built from the bottom up. The Walking Boss starts with a cheesy Parmesan-Asiago crust, which supports tender slices of steak, fresh onions, green peppers, mushrooms and provolone.

Where To Find the Best Burgers in NH